The book also featured Taylor Swift as the serpent of Eden and Donald Trump as Satan. 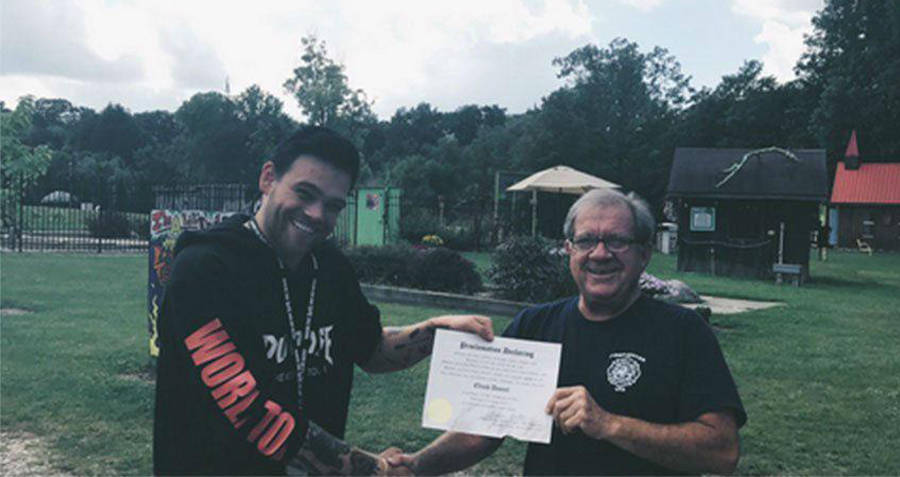 Elijah Daniel receives his certificate announcing him Mayor of Hell.

A 23-year-old former mayor of Hell, Michigan has rewritten the Bible to give it a more modern context. Elijah Daniel’s text refers to Rhianna creating the world in Genesis, Donald Trump as Satan, and Jesus turning water into mimosas, rather than wine.

During its brief stint on Amazon, the book became the number one new release in Christian ebooks and Bibles. However, it was taken down only hours after it being released.

Amazon has not yet commented on why they took the book down.

Though it was removed, Daniel remains passionate about his work, saying that he hoped it would inspire people.

Daniel has begun selling his book as a PDF on his personal website, thebiblebutgayer.com.

Other works by Elijah Daniel include a gay erotica novel about Donald Trump.

Aside from his controversial literature, Daniel is also known for becoming the Mayor of Hell, Michigan, as part of the town’s “Mayor for a Day” campaign. For a small fee of $100, the small town will make people its mayor. The campaign was designed to build the town’s tourism industry.

During his short stint in office, Daniel banned all heterosexual people from the town. He said it was a response to Donald Trump’s Muslim ban.

“My ban is a copy-and-paste of Trump’s Muslim ban, but with heterosexuals instead,” he told HuffPost.

This publicity stunt, which was done to highlight the insanity of Trump’s ban, and featured “reparative therapy” such as wearing cargo shorts in the town square, was a whole two days in the making.

“I was looking for a town willing to make me mayor,” Daniel said. “They’ll do it in Hell for $100, so I caught a redeye to Michigan and got sworn in.”

Though they have still not commented on the book, Amazon has reinstated Daniel’s bible.

Enjoyed this? Next, check out all of the things the bible has in common with the Quran. Then read about this Creationist geologist who sued the government over rocks from the Grand Canyon.