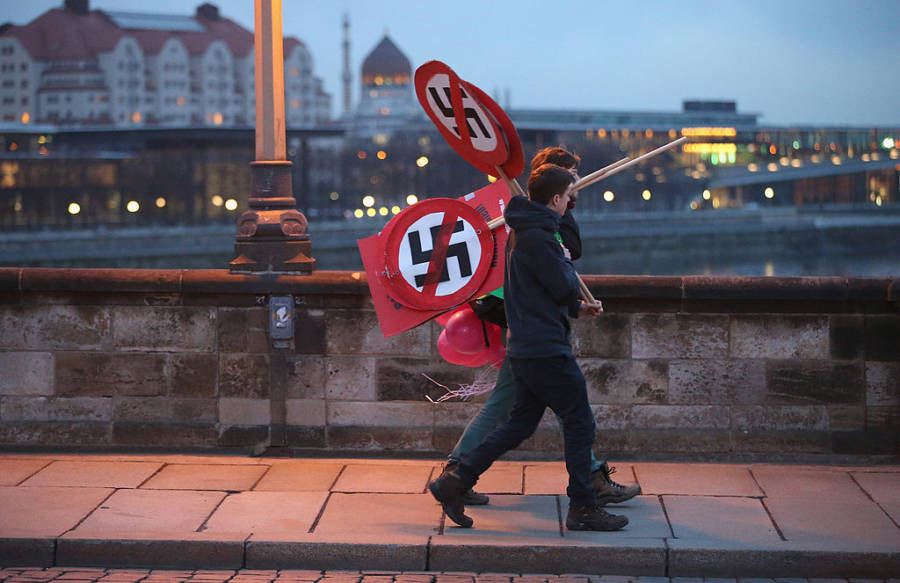 Germany and its neighbors understand the very real power behind hateful speech and symbolism.

For this reason, many of them enacted Anti-Nazi laws as part of denazification efforts following the fall of the Third Reich.

In Austria, these efforts materialized in the Verbotsgesetz 1947 (VerbotsG) law. Courts have enforced its rule many times over the decades — most recently in the conviction of an Austrian woman who hung a sign over her toilet reading, “This Hitlerine needs a clean latrine.”

The 53-year-old was initially investigated after criticizing a German soccer club’s Facebook post commemorating the liberation of Auschwitz and honoring the death camp’s victims, US News reported.

In her comment, the woman accused the team of “spreading lies” about the Holocaust (i.e. she did not believe there was anything to be “liberated” in the first place) — thus violating one of the law’s key tenets.

Section 3 of the rule states that anyone who publicly “denies, belittles, condones or tries to justify the Nazi genocide or other Nazi crimes against humanity” will be subject to imprisonment and trial by jury.

The resulting house search led to the discovery of the toilet sign.

The woman, whose name is being kept private in accordance with Austrian privacy laws, was given a suspended jail sentence and fined the equivalent of $1,280.

It is, however, legal in the United States, with the right being defended as a form of free speech.

Supporters of Anti-Nazi laws in Europe counter that stance by arguing that no country has completely “free speech.” Some rights — like the right to safety — circumstantially trump others.

“Holocaust denial might create a climate of xenophobia that is detrimental to democracy,” a lawyer wrote on Amsterdam Law Forum. “Hateful messages desensitize members of the public on very important issues. They build a sense of possible acceptability of hate and resentment of the other which might be more costly than the cost of curtailing speech.”

But some American groups disagree — arguing that the threat posed by Holocaust deniers or Hitler supporters is not as imminent as, for example, child pornography or yelling “Fire!” in a crowded theater.

The lack of regulation in the U.S. is unlikely to change soon, especially given that members of the Trump administration — which many have criticized for its anti-immigration hard-lining — have been accused of maintaining close ties with Holocaust deniers.

So, the Austrian woman in question could decorate her bathroom however she pleases here, but like Anne Frank’s family long ago and an Iranian baby in need of open-heart surgery this month, she may have some trouble getting in.

Next, read our look into what kind of person thinks the Holocaust didn’t happen, and why they feel that way. Then, learn why one-third of holocaust survivors in the U.S. are living in poverty.