June 2019 was the hottest month on record — so hot that it caused the Arctic Circle to catch on fire. 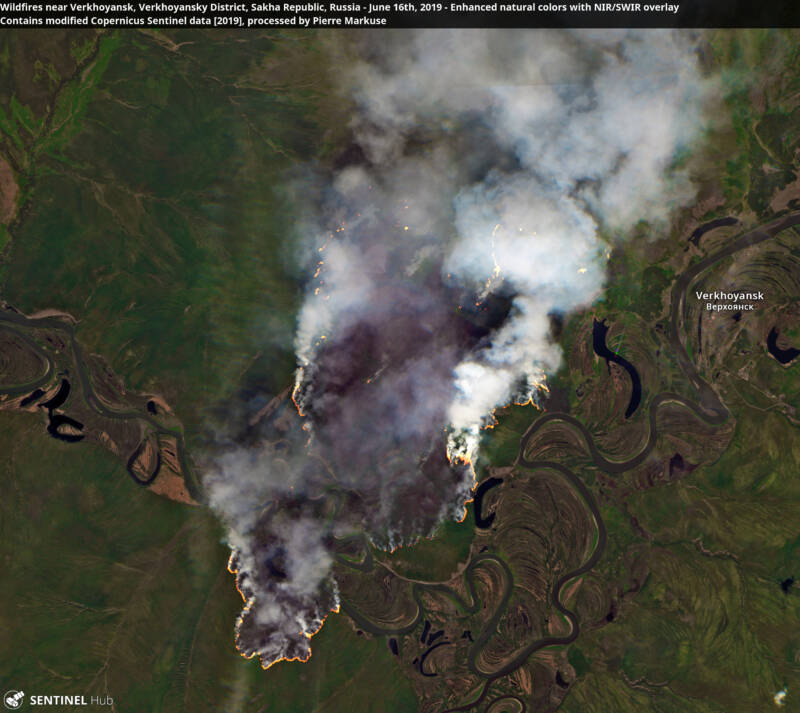 A new horrifying chapter has been added to the never-ending cycle of climate doom. The typically cool Arctic region has been engulfed by a heat wave, causing temperatures in parts of the Arctic to get so hot that it is igniting wildfires, as reported by Gizmodo’s Earther. And the high-flying flames have all been captured by satellite.

Satellite imagery processing guru Pierre Markuse has documented unbelievable images of bright orange-yellow blazes and clouds of smoke stretching across rivers, snowy mountains, and swaths of green forest in the Arctic that were or are ablaze. But the flames are only the beginning of our worries.

Thomas Smith, an assistant professor at the London School of Economics and Political Science’s Department of Geography and Environment, offered up one analysis of the horrific satellite photos of the burning Arctic plains. He called the string of extreme climate events a “symptom of a sick Arctic.”

Why should we be worried?
Peat shouldn't be available to burn. It only burns when it has been disturbed by some significant environmental change (e.g. drainage/drought). Siberian peatlands should be moist/frozen through summer, but this year's heatwave has dried them out.
[7/9]

The peatlands of the Arctic have historically been covered by permafrost. But steadily rising temperatures — spurred by human greenhouse gas emissions — have melted away this frozen layer on the Arctic 70 years earlier than scientists predicted it would happen.

The stunningly early thawing of the permafrost is indicative of an accelerating change in climate conditions right before our eyes.

What’s worse is that the recent wildfires will only accelerate the epidemic of global warming, since peatlands store a massive amount of carbon. Peatlands store about twice as much carbon as all of the world’s forests — despite only covering 3 percent of the Earth’s land. When they burn, all of that carbon goes into the atmosphere, forcing global temperatures to rise even more.

June 2019 was the hottest month ever recorded in the history of the planet. In that month alone, the Arctic Circle’s wildfires emitted 50 megatonnes of CO2 into the atmosphere. 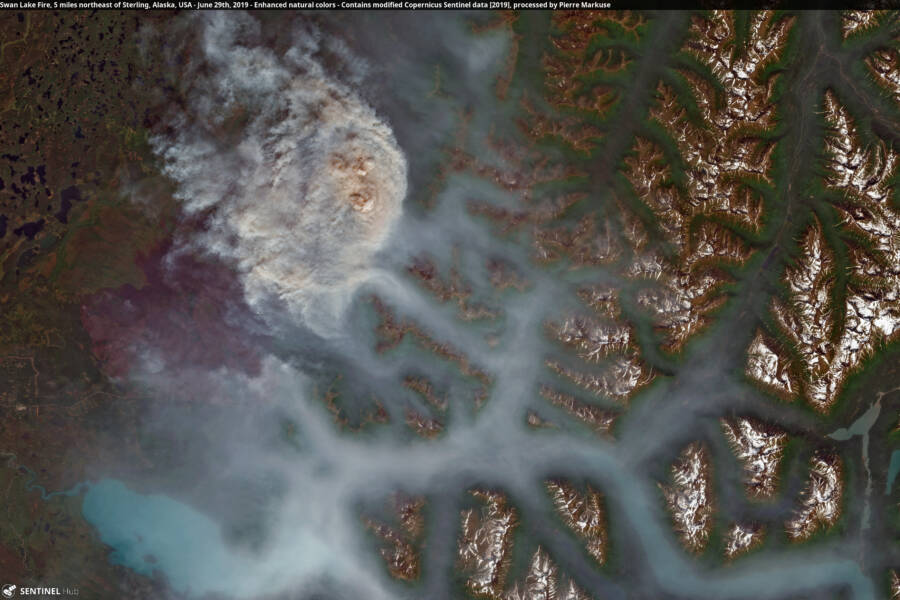 Pierre MarkuseA satellite image of the Swan Lake Fire in Alaska, about 55 miles outside Anchorage. The fire has grown to more than 100,000 acres since it started on June 5. Officials don’t expect to contain it until the end of August. June 29, 2019.

“This is the equivalent of Sweden’s annual total CO2 emissions. This is more than was released by Arctic fires in the same month between 2010 and 2018 combined,” World Meteorological Organization spokesperson Clare Nullis warned during a regular United Nations briefing in Geneva earlier this month.

According to the European Union’s Copernicus program (CAMS), which is tasked with monitoring atmospheric conditions of the earth to provide the international public with information related to air pollution, health, and other climate-related environmental issues, wildfires in these regions are typical between the months of June and October.

But the current wildfire activity seen this year is “unprecedented.” Indeed, the latitude and intensity of the fires coupled with the length of time they have been burning are particularly unusual, according to the climate service. 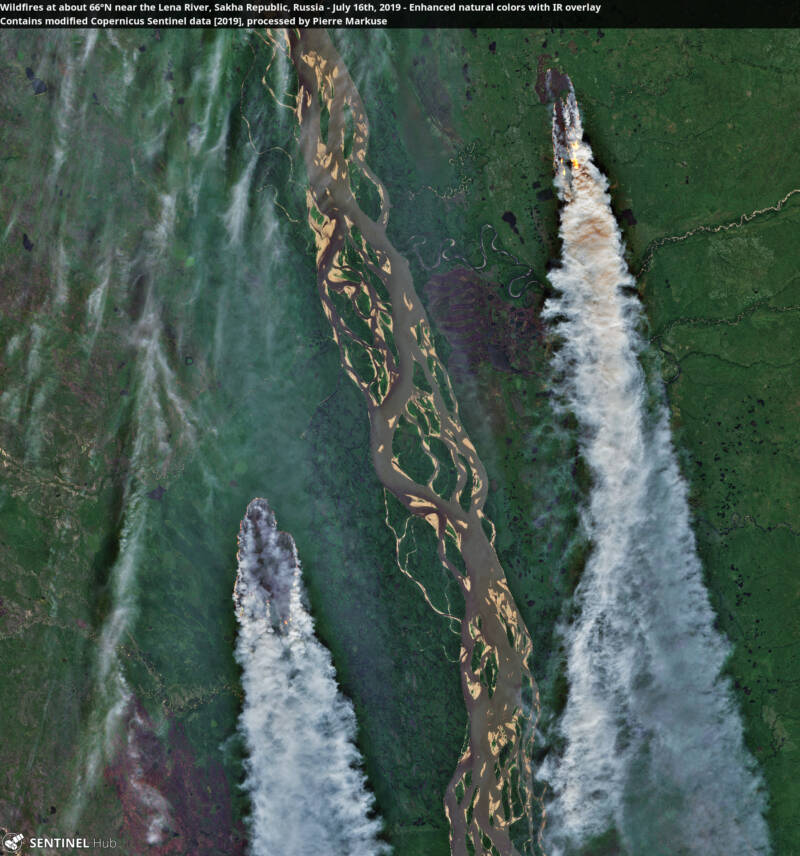 Smoke plumes from a wildfire near the Lena River in Siberia. July 16, 2019.

The boreal forest that encircles the Arctic region up north — which stretches from Alaska to parts of Greenland and Siberia — is experiencing wildfire activity that has never been seen in at least 10,000 years.

Since June, CAMS has tracked more than 100 long-lived wildfires in the Arctic Circle which have been most severe in Alaska and Siberia, where some have been massive enough that they could blanket 100,000 soccer fields.

After learning about the unprecedented wildfires sweeping the Arctic, read about scientists’ wild plan to “refreeze” the Arctic in order to save it. Then, take a look at how animals in the Arctic have adapted to their harsh landscape.