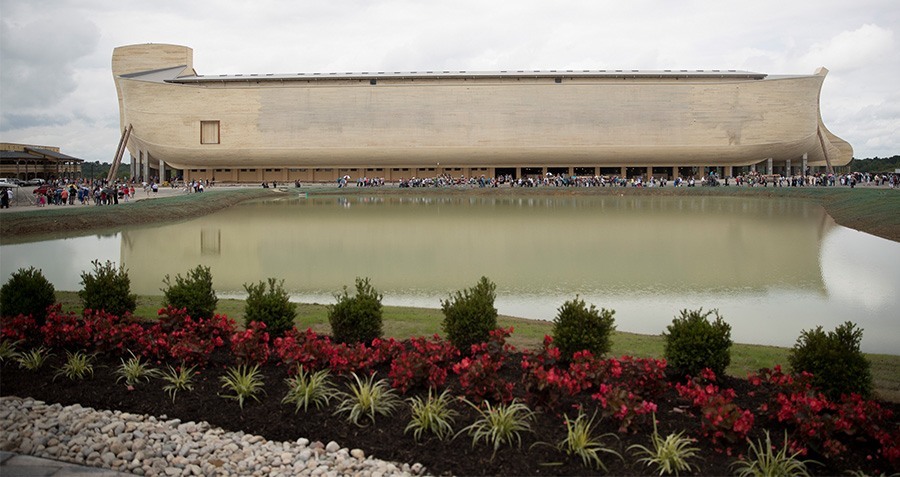 If the Bible’s flood-filled depictions of man’s struggle against mortality just don’t do it for you, good news: Kentucky has just opened a massive Noah’s ark replica.

On Tuesday morning at 9 a.m. sharp, Christian apologetics group Answers in Genesis (AiG) unveiled the Ark Encounter, a 510-foot long, 51-foot high ark whose dimensions are based on those which appear in the Bible — and which AiG believes to be literally true.

From start to finish, the ark took approximately six years and $100 million to make — a price which AiG believes it will recoup rather quickly.

“People are going to come from all over the world,” AiG president Ken Ham said in a Tuesday preview. The group estimates that the ark will bring in around 2 million visitors in its first year, which Cincinnati news outlet WLWT says puts it on par with “big-ticket attractions in nearby Cincinnati.”

Once inside the ark, visitors — whose entry costs $40 for adults — can view museum-like exhibits that feature displays of Noah’s family as well as animal replicas.

The ark is just the latest structure AiG has built to demonstrate the literal, physical “proof” of their faith. In 2001, AiG broke ground — again in Kentucky — to build the Creation Museum, which provides visitors with lifelike replicas of Bible passages, as well as scientific proof that their faith is irrefutable biological fact.

As with the Creation Museum, the Ark Encounter has garnered its fair share of opponents. Some take issue with the fact that the ark, which promotes a singular theological worldview and only hires Christians, should not have received state tax incentives to aid in its construction. The tax incentive provides a rebate for a portion of the sales tax the ark collects.

A federal judge disagreed, ruling in January that the Ark Encounter could receive a state sales tax incentive up to $18 million and still be able to literally test its employees’ faith, WLWT reported.

In the ruling, the court said that Kentucky officials could not impose requirements on the ark that were not applied to other applicants for the tax incentive, which effectively made it such that AiG could make discriminatory hires based on job applicants’ religions.

Beyond questionable tax incentives, others take issue with the quality of information the attraction spreads. “Basically, this boat is a church raising scientifically illiterate children and lying to them about science,” Jim Helton, who lives about a half-hour from the ark, told WLWT.

While critics have been quick to lambast AiG for planting yet another fortress of creationism quackery on Kentucky soil, it may have actually been attempts to squash AiG’s endeavors (and voice) that really aided in the ark’s completion.

In February 2014, popular science figure Bill Nye “the Science Guy” engaged in a widely-watched debate with Ken Ham on evolution. A few weeks after the debate, which AiG posted on YouTube, Ham announced that AiG had raised $62 million for the project, millions of which came from a city bond issuance. Months later, the ark commenced construction.

Nye, who has consistently raised concerns that AiG’s work is deleterious for scientific literacy, later apologized for the attention the debate drew, and added that he was “heartbroken and sickened for the state of Kentucky.”

Next, read about the varying perspectives of Jesus across cultures.