"The police have attempted to scare marriage equality activists out of speaking up against bigotry. They have failed.” 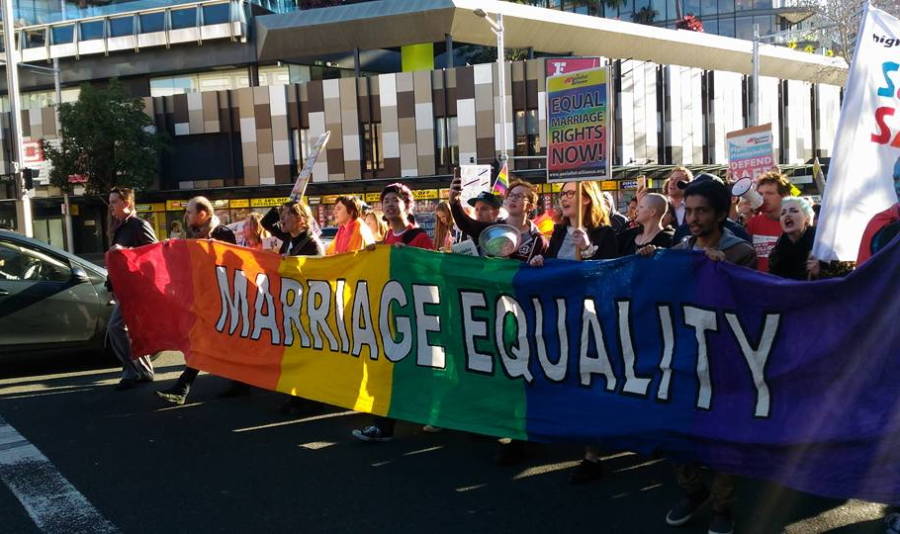 Many may consider the word f-ck to be unsavory, but an Australian magistrate has ruled that it isn’t offensive in the eyes of the law — at least in one controversial case.

Police ticketed Rose, Wright and Holcombe for chanting “f-ck Fred Nile,” “f-ckers,” and “bigots f-ck off” at a Community Action Against Homophobia (CAAH) protest against Rev. Fred Nile, the conservative leader of the Christian Democratic Party and an outspoken opponent of same-sex marriage.

In Australia, the maximum penalty for offensive language is a $660 fine, served with a notice to appear in court. Now, Rose, Wright, and Holcombe have had their day in court — and won.

Holcombe, the LGBTI Officer for the National Union of Students, said during the 2015 rally that, “We need to make a stand against them and make sure us using bad language about these f-ckers is nothing compared to the epidemic of suicides these people contribute to.”

“The police have attempted to scare marriage equality activists out of speaking up against bigotry,” Wright said. “They have failed.”

Now, activists like Wright seek to continue to fight against men like Nile, the longest-serving member of the New South Wales parliament. Nile, a vocal opponent of same-sex marriage throughout his career, has sparked controversy in recent years with statements like this, regarding Australian Senator Penny Wong’s pregnancy, in 2011:

“I’m totally against a baby being brought up by two mothers — the baby has human rights. It’s a very poor example for the rest of the Australian population. She needn’t have made it public — it just promotes their lesbian lifestyle and trying to make it natural where it’s unnatural. The only reason she’s made it public is to make a statement to the Australian people.”

Furthermore, Nile has introduced legislation that would ban face coverings such as the burqa and niqab, and called for a moratorium on Muslim immigration into Australia — all of which has earned him vocal critics like Wright, Holcombe, and Rose.

“We’ve won the right to say what we think of Fred Nile,” said Rose, “but with marriage equality still banned by law, the homophobes haven’t been defeated. We’ll keep protesting until we have our rights, and you can expect a few f-bombs along the way.”

Rose’s lawyer, Christian Hearn, added that the offensive language laws the police used against the trio under had “for too long been used as a social control applied disproportionately against marginalised and vulnerable people. The magistrate ruled that the language used by our clients was not unlawful and once again confirmed that a person does not commit a crime merely by using the word f—.”

Next, learn about how the United States achieved full marriage equality, before checking out this one Alabama judge who keeps trying to ban it.