"I walked out and saw what I thought was sand covering my calf and shook it off, and by the time I'd walked across the sand about 20 meters...I had blood all over my ankles." 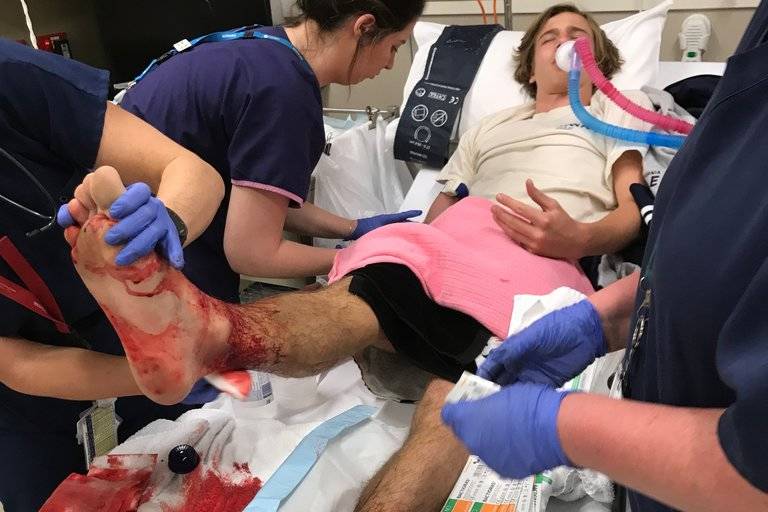 Lice are definitely gross, but they’re not typically thought of as carnivorous machines that leave their mauled victims dripping with blood. At least, head lice aren’t. Sea lice, however, are apparently a different story.

These ocean creatures are the leading suspects in the case of an Australian teenager who stepped out of the water to find shockingly severe injuries on his ankles.

Photos of Sam Kanizay, a 16-year-old Melbourne resident, went viral after he spent just 30 minutes in the water at Dendy Street Beach on Monday and emerged with what his father said “looked like a war injury.”

“I walked out and saw what I thought was sand covering my calf and shook it off, and by the time I’d walked across the sand about 20 meters to put my thongs on, I looked down and noticed I had blood all over my ankles,” Kanizay told ABC.

“We got him in the shower but as soon as we did that the blood kept re-appearing,” Kanizay’s father, Jarrod Kanizay, told the BBC. “It wasn’t clotting at all. It just kept bleeding and bleeding.”

The family rushed the teen to the hospital, where doctors were unsure what had caused the brutal damage to his legs.

“The cold water numbed my legs,” Kanizay told 3AW radio of why he didn’t get out when the bites were happening. “It sort of looked like hundreds of little pin holes or pin-sized bites distributed all over my ankle and the top of my foot.”

They contacted two hospitals about the injuries, but still received no concrete diagnoses.

“We had the emergency room full of everybody that was working there just fascinated, they were all on Google afterwards, hypothesizing as to what happened,” Jarrod told The Age. “They pretty much had 10 different hypotheses but nothing yet.”

Though sea lice typically stick to a diet of fish and, when they do bite humans, typically leave only tiny, rash-like pinpricks behind, doctors couldn’t think of any more likely culprit for Sam’s cuts.

Seeking more definite answers, Sam’s father went back to the bay outside their house to investigate.

Using a chunk of raw steak as bait, Jarrod caught dozens of the little creatures. He captured a video of them swarming the meat and sent some off to experts to be identified.

Professor Alistair Poore identified the little scavengers as amphipods, not lice, but he wasn’t convinced they had caused Sam’s injury.

“You can attract a lot of animals in the sea with raw meat,” Poore told The New York Times. “Even though it’s interesting, it doesn’t prove to me they were the ones that bit his legs.”

Personally, I don’t care what it was that turned this guy’s ankles into a scene from a Saw movie. With them, plus two-headed sharks, plus poisonous-jaw-spitting sea urchins around, I will be sticking to swimming pools.

Next, read about the Australian man who had his thumb replaced with a toe after a bull attack. Then, check out the glow-in-the-dark “sea pickles” invading the West Coast.