The man arrested for the crime has been in jail since January. 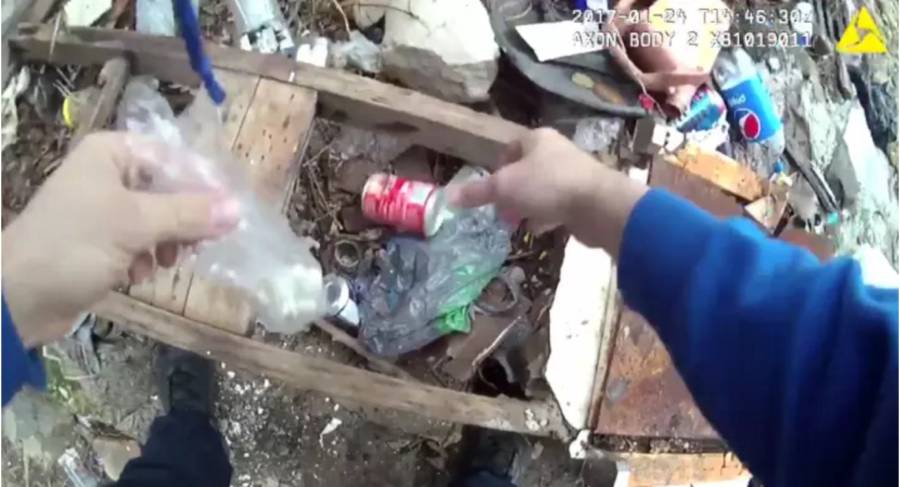 In footage from his body cam video, Baltimore police officer Richard Pinheiro can be seen rummaging around a pile of garbage.

Normally, this would seem like an impressive bit of detective work — had the same footage not shown Pinheiro plant the drugs in that exact spot 30 seconds earlier:

Footage shows officer placing drugs in trash; goes out to street, turns on camera, returns. Cams save 30 sec prior to activation, w/o sound pic.twitter.com/5ZW128lWFM

Apparently not understanding how body cameras work, Pinheiro did not know that the devices automatically save the thirty seconds of footage (but not audio) taken before they’re turned on.

The shocking footage from January 2017 shows Pinheiro placing a bag of white pills under the garbage in an alley while fellow officers Jamal Brunson and Jovannes Simonyan watch.

The men then walk out to the street, where Pinheiro appears to push a button on the camera. The sound comes on.

“I’m going to check here,” he says before walking into the alley he just exited. Laughing is audible in the background.

The man arrested in connection with this shoddy police work has been held on drug charges since January, unable to pay the $50,000 bail, according to The Baltimore Sun’s crime reporter, Justin Fenton.

He was scheduled to face trial this week, but the charges were dropped after a public defender reviewed the video.

“If you have a case dependent on any of these three officers, dig your feet in and demand disclosure of their IAD records,” the attorney wrote in an e-mail to other city defenders.

While charges on this particular case were dropped, officer Pinheiro is a witness in 53 currently active cases and has likely testified in many more closed ones.

Fenton pointed out that Pinheiro could have been simply reenacting the original discovery of the drugs, but that would still be troubling:

The Baltimore State’s Attorney told Buzzfeed News that they were aware of “what appeared to be troubling activity by a Baltimore police officer” and that they “took immediate and appropriate actions by dropping the case and alerting his supervisor.”

The Baltimore Police Department has launched an internal investigation into the officers.

When questioned about the footage, Pinheiro testified that he didn’t recall the events.

Meanwhile, attorney Deborah Levi expressed concerns to the Baltimore Sun about the use of body cameras if police doctor their footage.

“Officer misconduct has been a pervasive issue at the Baltimore Police Department, which is exacerbated by the lack of accountability.” Levi said. “We have long supported the use of police body cameras to help identify police misconduct, but such footage is meaningless if prosecutors continue to rely on these officers, especially if they do so without disclosing their bad acts.”

Next, watch these police warn unaware paddleboarders that they’re surrounded by great white sharks. Then, read about the Alabama legislation that allows a church to have its own independent police force.