Willie Murphy didn't just turn the tables on the home intruder — she literally picked up her table and hit him with it. 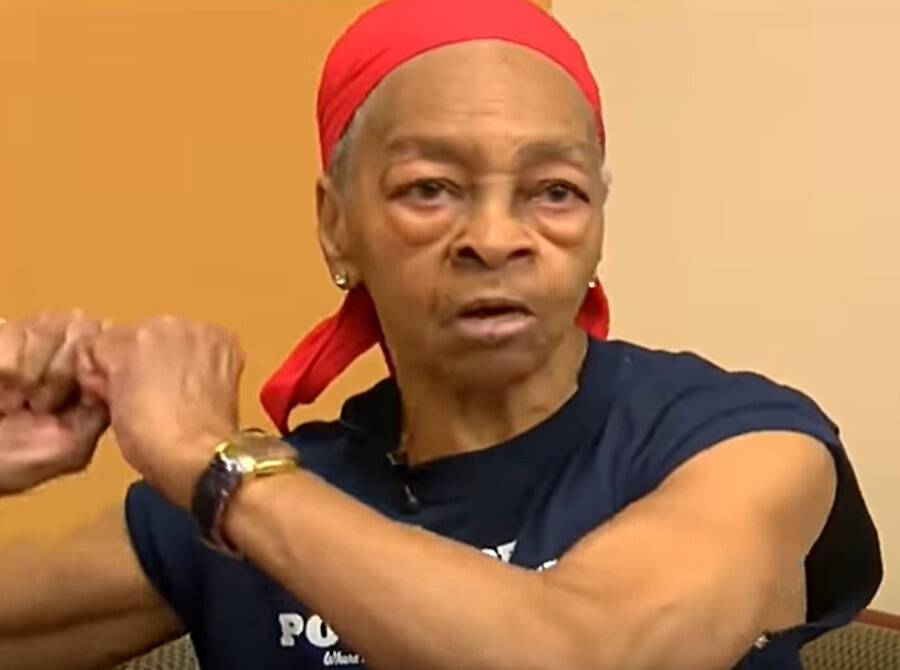 YouTubeBodybuilder Willie Murphy struck the home intruder several times before jumping on him.

A man up to no good got more than he bargained for when he broke into the home of an 82-year-old grandmother. Turns out, the little old lady was an award-winning bodybuilder.

According to local news station WHAM-TV, Willie Murphy was enjoying a quiet night at home last week when a stranger appeared on her house porch. The man claimed he needed medical help and asked Murphy, who was alone in her home in Rochester, New York, to call an ambulance.

The elderly woman did as she was told but, following her better instincts, didn’t let the strange man inside her home. That’s when she heard a loud noise and realized that the man had broken into her house.

“It was kind of semi dark, I’m alone, and I’m old, but guess what — I’m tough,” she said as she flexed her buff right arm. Murphy, a trained bodybuilder, instinctively grabbed one of the tables in her home and started swinging furiously at the man.

Willie Murphy hit him so hard the table broke into pieces. She grabbed one of the table’s broken metal legs and continued to beat the intruder with it, and the man fell to the floor. The 82-year-old grandmother then seized the opportunity to start physically jumping on him.

But the home invader’s nightmare was far from over. After jumping on the man a few times, Murphy grabbed a bottle of baby shampoo and poured it all over the man’s face. After that, she started hitting him again, this time with a broom.

“He picked the wrong house to break into,” she said.

Once the man was clearly subdued, Murphy tried to move his body out of her house. But the man was surprisingly still too heavy for the grandmother, who routinely deadlifts 225 pounds during her bodybuilding training.

“He wants to get the heck out of there and I’m trying to help him get out of the house, but I can’t move him,” she said. “He’s dead weight.” By the time the police arrived at the scene, it was clear that it was the intruder who needed help, not the old woman.

“I had really did a number on that man,” Murphy said. According to authorities, the man was taken to the hospital where it was confirmed that he was drunk before he broke into Murphy’s house.

Fortunately for the failed invader, he safely escaped the granny beat down, and will not be facing legal consequences for his drunken behavior since Murphy won’t be pressing charges. The man’s bruised body and ego are probably punishment enough.

“She is the wrong person to mess with,” said Rajen Sells, a young gym-goer at Murphy’s local workout spot who knows the tough grandma.

Cell’s sentiments were echoed by another one of Willie Murphy’s friends, Jim Marron.

“I probably weigh close to twice as much as her. I wouldn’t want to tango with her,” said Marin, who’s known the bodybuilder for more than a decade. Last Friday, only a day after her ordeal, Murphy was already back at the Maplewood YMCA where she usually trains.

Murphy, who just won a bodybuilding competition earlier this year, has received a number of awards. She has earned first place in her division at the World Natural Powerlifting Federation’s championships more than once, and was named the 2014 Lifter of the Year after snagging the gold for the power curl, deadlift, and bench press competitions.

Age is truly just a number.

Next, read some advice from a woman who celebrated her 107th birthday and find out why a 102-year-old lady strangled her neighbor to death.