Travel Through Two Million Years Of History At The British Museum 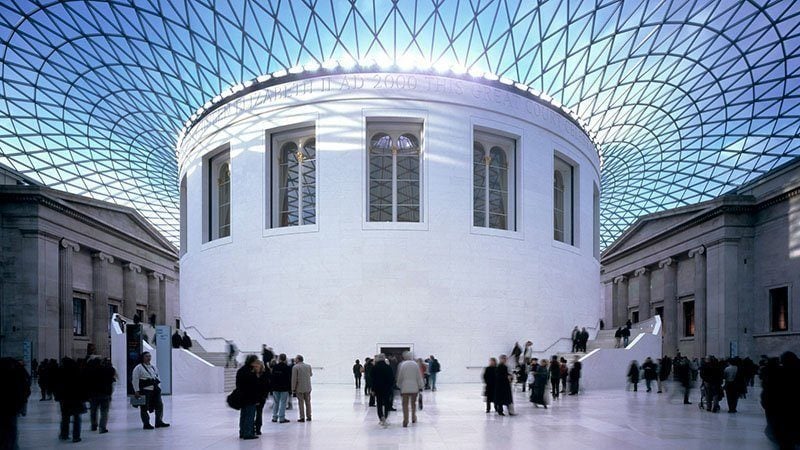 The interior of the British Museum Source: Art Fund

For fans of human history there are few, if any, places on Earth more sacred than the British Museum. Located in London, it is the home of the greatest collections of human artifacts the world has to offer (housing approximately eight million artifacts). Together, they tell a comprehensive tale of humanity’s epic journeys, starting nearly two million years ago when primitive humans first appeared on this planet and continuing all the way to the present.

If you seek the full museum experience, you really have to travel to London, which is not something everyone is able to do. With that in mind, this is a modest alternative that looks at some of the greatest pieces housed in the British Museum. 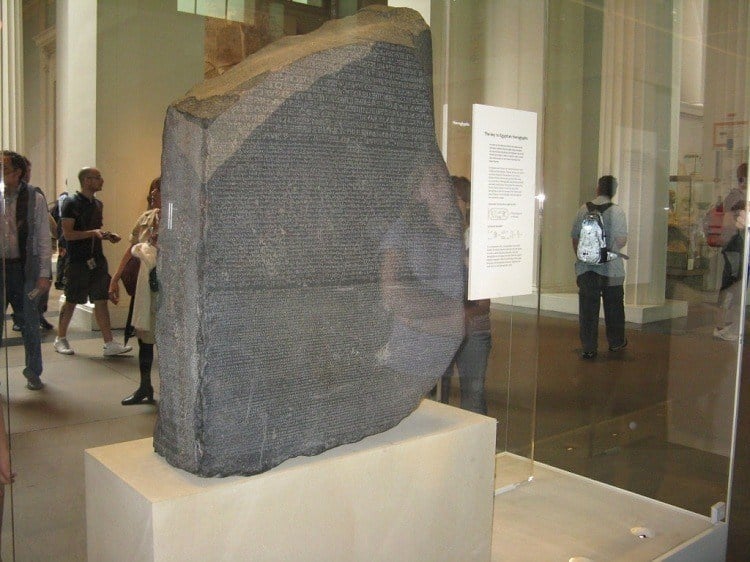 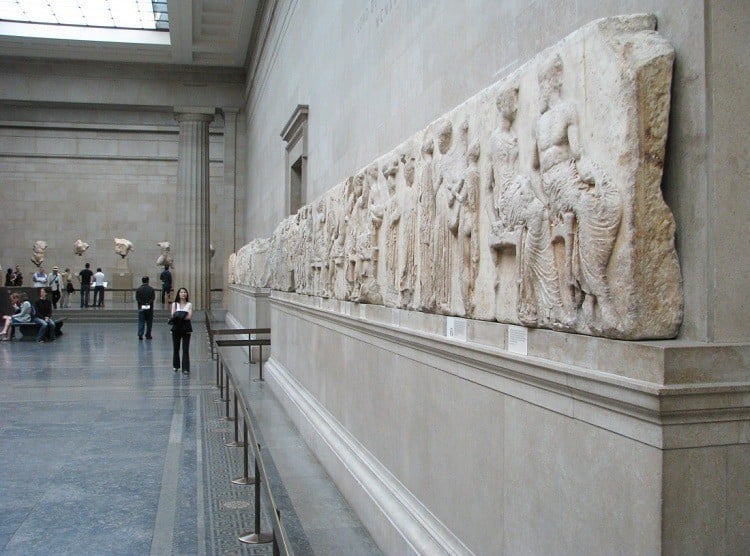 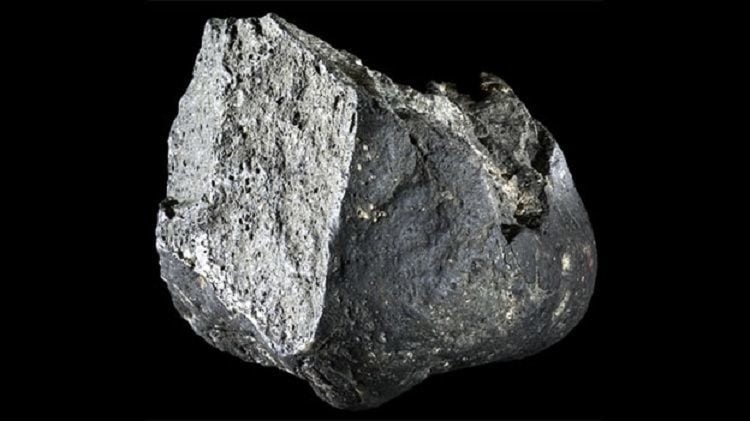 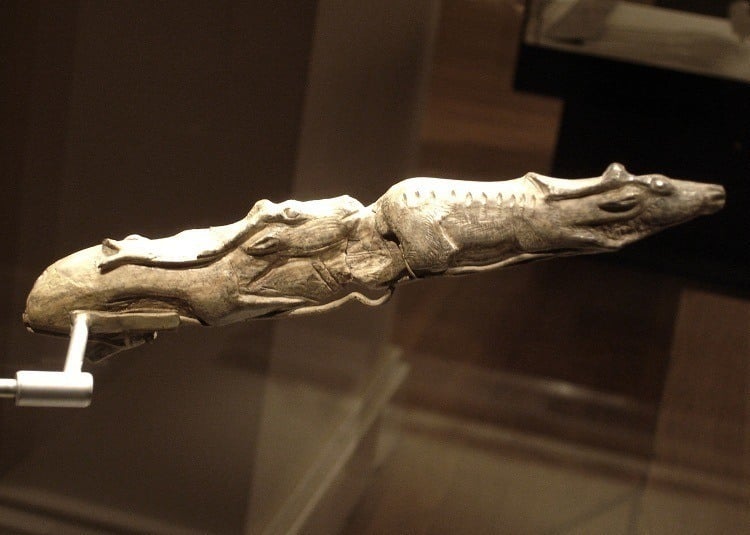 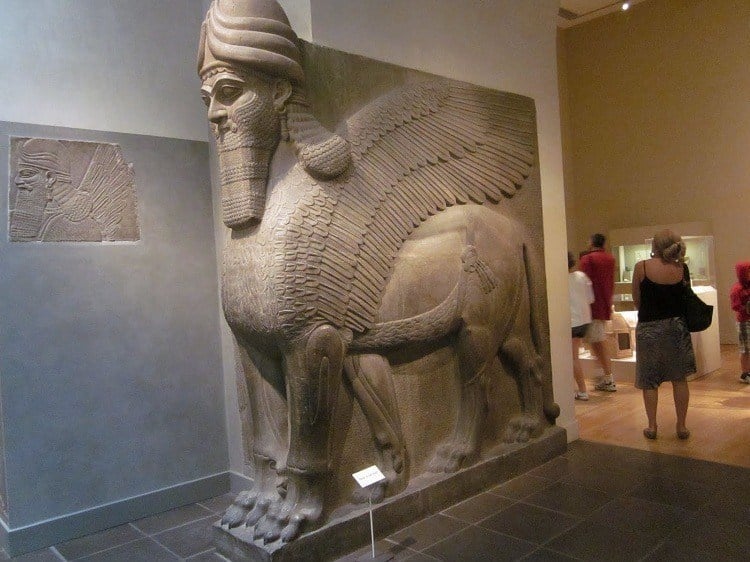 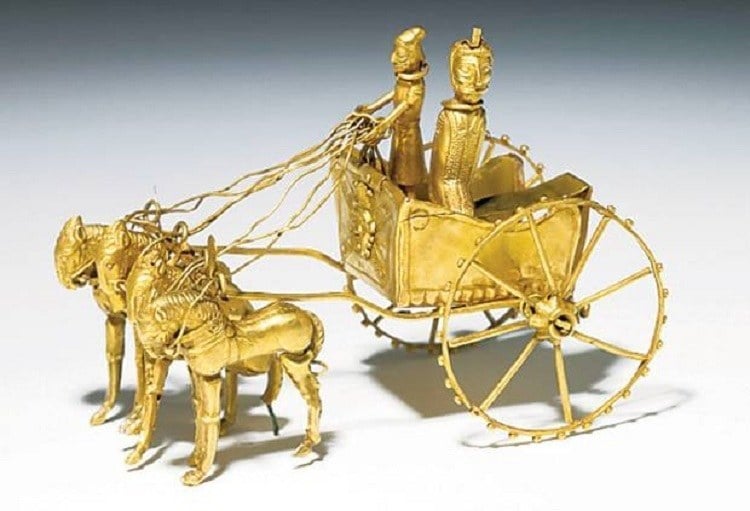 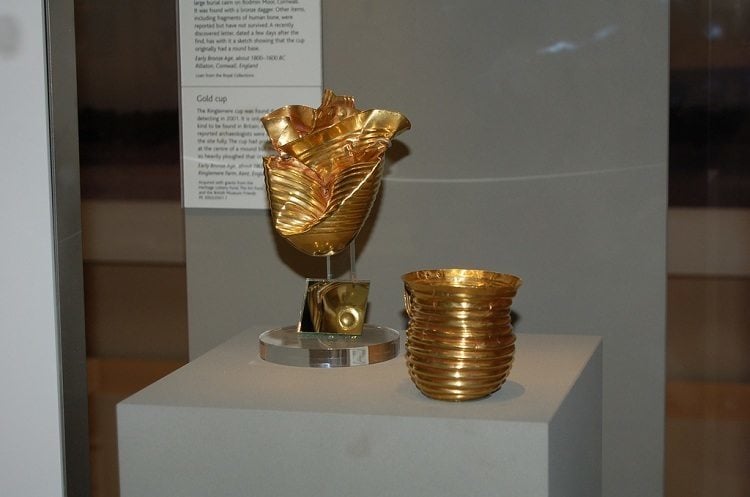 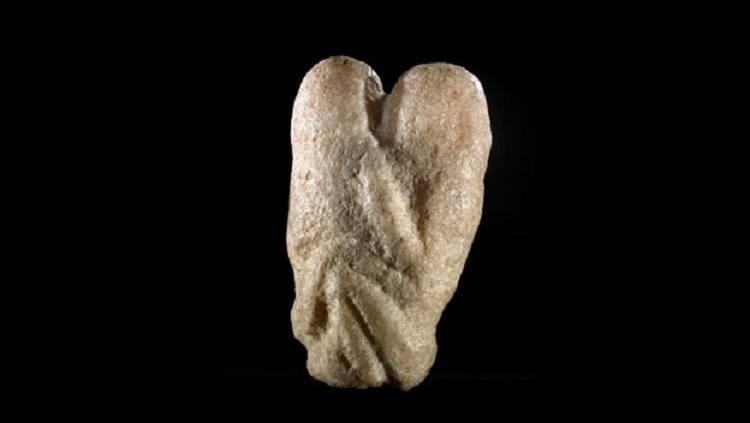 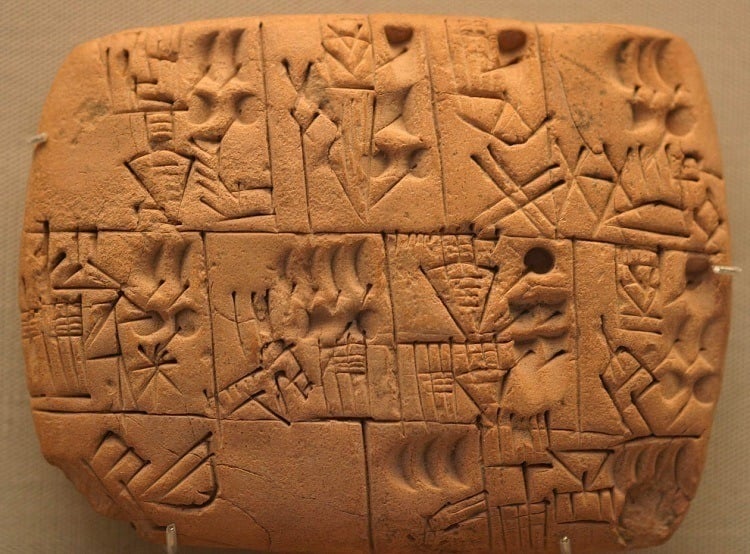 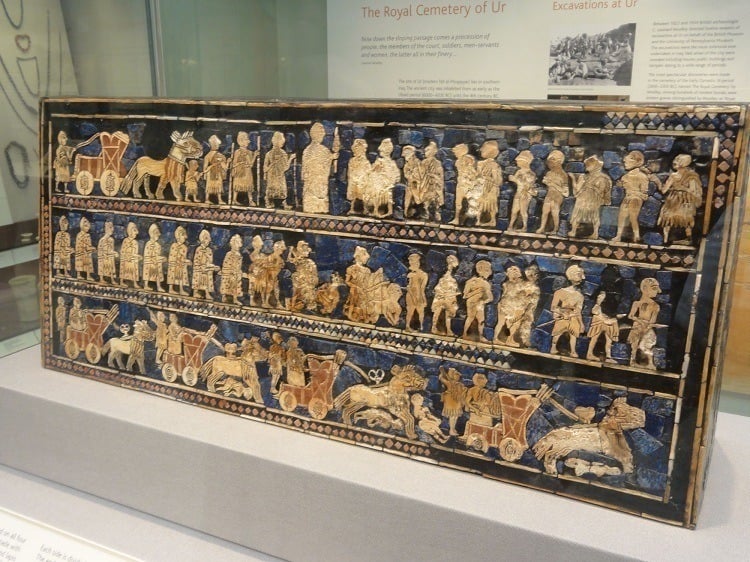 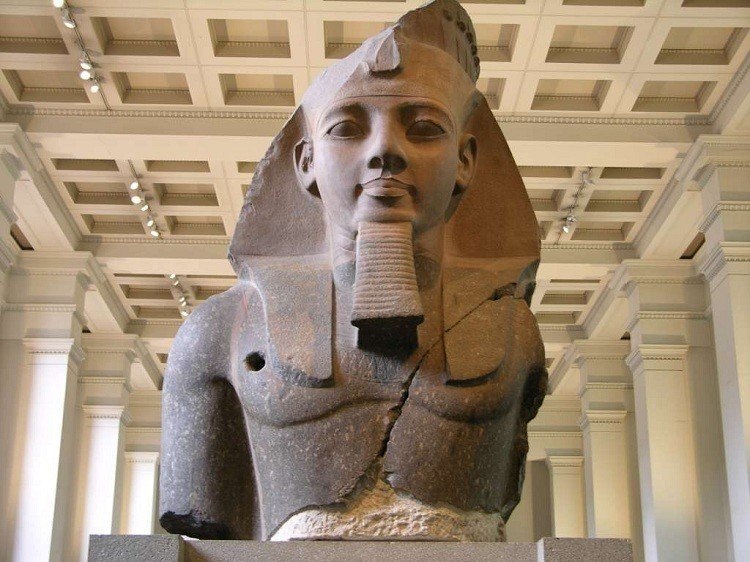 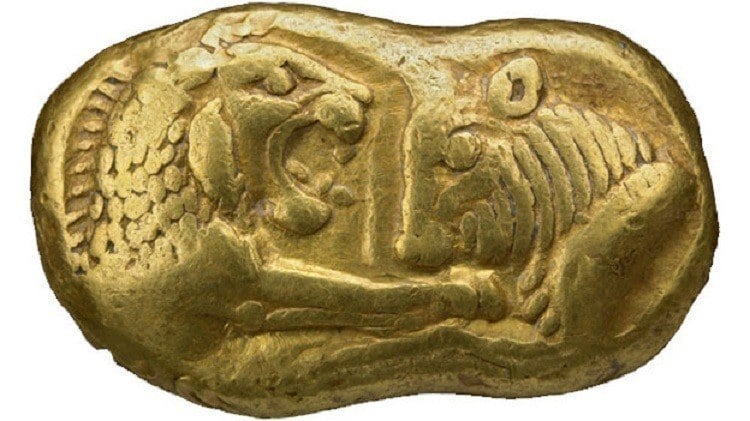 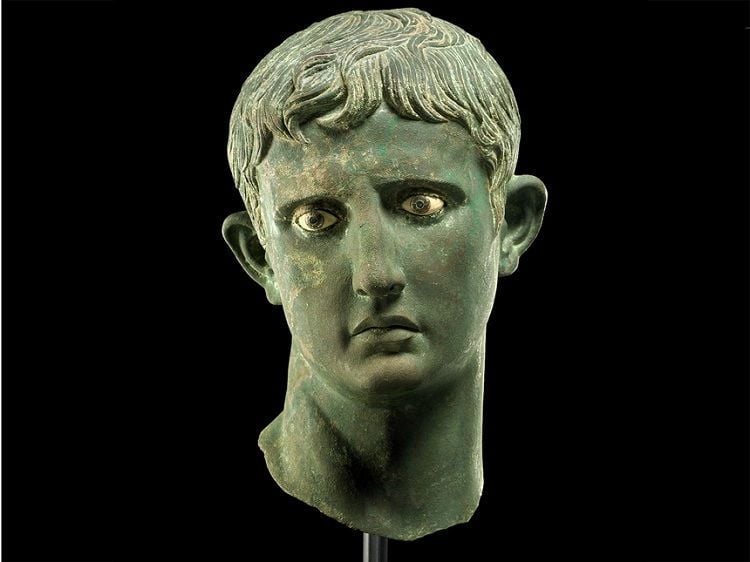 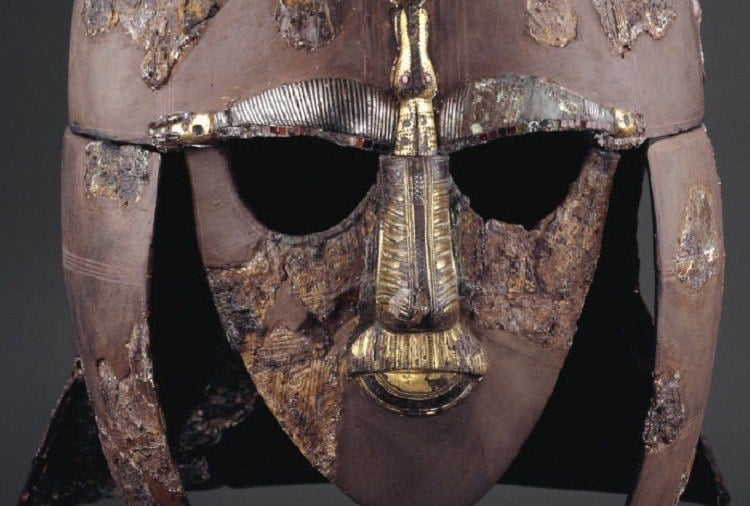 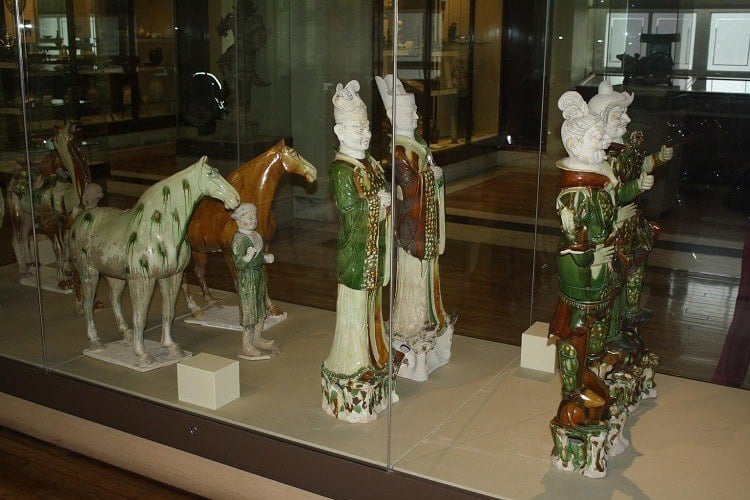 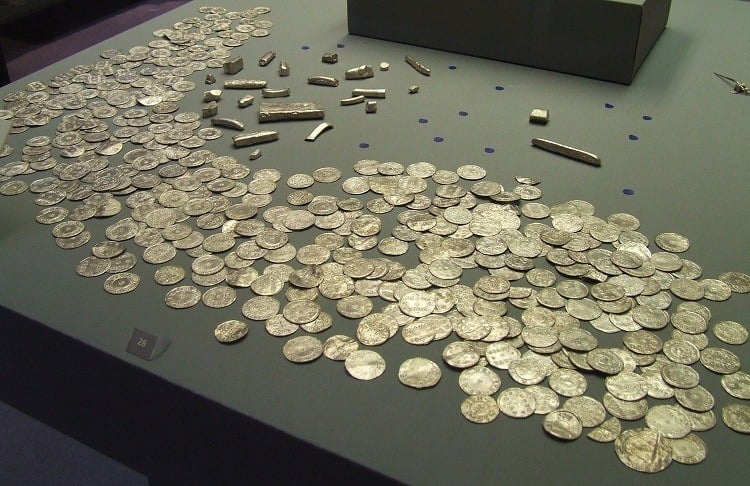 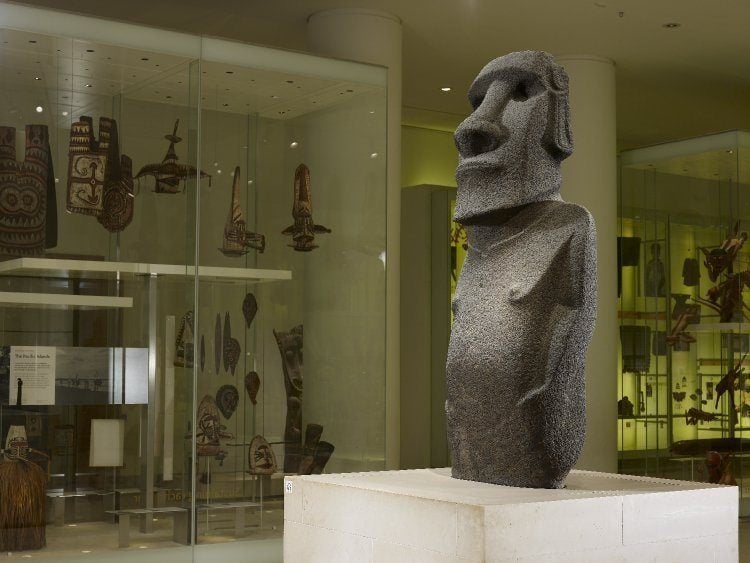 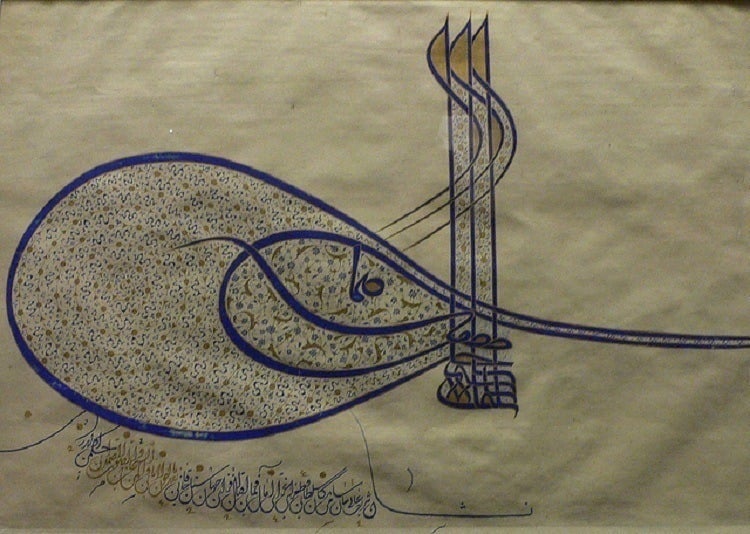 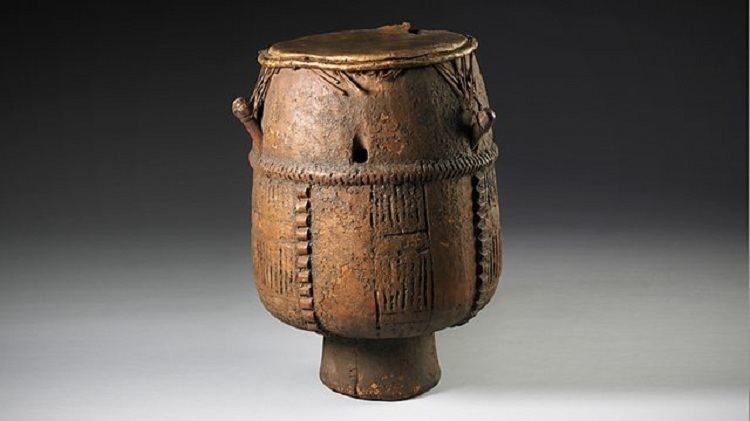 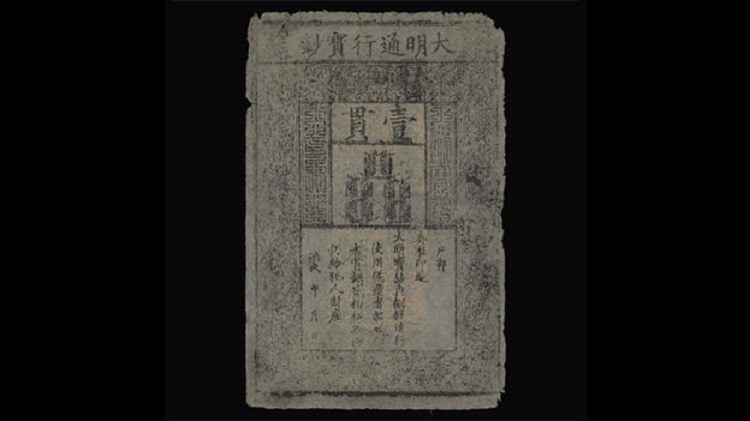 The most popular object in the British Museum is also one of the most controversial. Historically, the Rosetta Stone is one of the most important artifacts ever. It allowed us to understand Egyptian hieroglyphs for the first time because it features the same text in three different languages: hieroglyphs, Demotic script and ancient Greek. It’s been with the museum since 1802 but the Egyptian government is fighting quite hard to get Rosetta back. Source: Img Kid
2 of 21

Together, the Parthenon Marbles constitute an invaluable collection of over a dozen statues, panels and almost 250 feet of a frieze all taken from the Parthenon Temple and surrounding buildings. Like the Rosetta Stone, this display has been the subject of controversy as Greece wants its priceless 5th century BC artifacts back. They were taken in the 19th century under “iffy” circumstances. Source: Bellcurve Life
3 of 21

At first, this piece of stone doesn’t look all that impressive. However, it is the oldest object in the museum and was used as a chopping tool 1.8 million years ago. That is almost as long as humans have been around. Source: British Museum
4 of 21

Although we sometimes regard mammoths as ancient, prehistoric creatures, we forget that they actually died out only about 4,500 years ago. The Swimming Reindeer, the oldest piece of art in the museum, is a good reminder. Humans manipulated the mammoth tusk to form the Reindeer, showing that even in the Ice Age humans had an artistic side. Source: Wikipedia
5 of 21

Although this giant statue is by no means unique, it is still quite impressive. A Lamassu was a mythological Assyrian winged creature with the body of a lion and the head of a human. Their statues were placed at the entrances of throne rooms to act as guardians. The one at the British Museum guarded Ashurnasirpal II, King of Assyria during the 9th century. Source: Wordpress
6 of 21

There was a time when the Persian Empire might have been the wealthiest in the world, and this 5th century BC collection illustrates that point beautifully. The Oxus Treasure consists of 180 pieces made from gold and silver. The collection’s centerpiece is an incredibly intricate gold model of a horse-drawn chariot that has withstood the test of time. Source: The Independent
7 of 21

This Bronze Age gold cup was found by chance in 1837 when construction workers were taking stone from a burial cairn. Things took a turn for the mysterious when they found a stone-lined vault on one side of the mound. Inside the vault were the remains of one person, a bronze dagger, some items that didn’t survive, and this gold cup. Source: Tumblr
8 of 21

This small, simple statue made from a pebble is thought to be the oldest representation of humans having sex. It is about 11,000 years old and, although primitive, it does clearly depict two humans wrapped around each other, one of them with their knees up and over the legs of the other one. Source: British Museum
9 of 21

We generally accept that writing was developed in Mesopotamia over 5,000 years ago, though there have been artifacts that contradict it. But if we accept it as true, then this cuneiform tablet contains one of the oldest writings in the world. And it delivers a very important message – a record of beer rations for workers. Source: IA State
10 of 21

Founded sometime around 3,800 BC, the Sumerian city of Ur was one of the oldest cities in the world, which means that any artifact recovered from it would have tremendous historical value. Even so, this artifact is incredibly special due to its great condition (and even color) despite being around 4,500 years old. We’re not sure exactly what its purpose was, but it was found buried in a royal grave and depicts several scenes involving an unnamed king. Source: Virtual Light
11 of 21

Another one of the museum’s showcase artifacts, the Younger Memnon is a giant statue depicting pharaoh Ramesses II aka Ramesses the Great, which was taken from the Ramesseum in Thebes. It is part of a pair of statues, the other one still in front of the Ramesseum, the mortuary temple of the pharaoh. Source: Georgetown University
12 of 21

This is one of the oldest coins in the world, made over 2,500 years ago in Lydia, modern day Turkey. Despite its age, the coin still has remarkably detailed and clearly visible impressions of a lion and a bull. Lydia started making coins in the first place because of its fabulous wealth. In fact, King Croesus is still thought to be one of the richest people to ever live. Source: British Museum
13 of 21

Augustus Caesar, also known as Octavian, was the first Roman emperor. This incredibly-preserved head came from a statue in Egypt which was decapitated by an invading army and buried in the sand as an insult. In a weird twist of fate, it was this very act that ensured the head’s preservation. Source: WSI Mag
14 of 21

This helmet is part of a collection widely considered to be one of the most significant Anglo-Saxon discoveries of all time. It belonged to an important war chieftain (although we’re not sure who) and was buried alongside him with a large weapon arsenal and a 90-foot long ship. Source: BBC
15 of 21

Although they look almost brand new, these figurines are almost 1,300 years old and come from the tomb of a renowned Tang Dynasty Chinese general named Liu Tingxun. Each statue is over three feet high. Two of them depict lokapala, fierce guardians placed in temples to protect patrons from evil spirits. Interestingly, all of the human figures (and the lokapala) have white, uncolored heads, although we’re not sure why. Source: Pointurier
16 of 21

If you think there’s no such thing as buried treasure, think again. This hoard was discovered in 2007 and it belonged to a 10th century Viking elite who plundered the treasure from all over the world. The collection contains jewelry, coins and silver cups from Russia, Scandinavia and Central Asia. Source: Wikipedia
17 of 21

You don’t have to travel to Easter Island to see one of their famous moai statues. One of them is hanging out at the British Museum. Source: British Museum
18 of 21

Tughra of Suleiman the Magnificent

A tughra is the official symbol that an Ottoman ruler would use as his signature. There was no Ottoman ruler greater than Suleiman the Magnificent, and this is a document bearing his tughra, thought to have a large looping shape inspired by the silhouette of a falcon. Source: Flickr
19 of 21

This exotic drum was collected from Virginia in the early 1700s. However, it was actually made in the Akan region of Ghana, which means that it was most likely brought to America on a slave ship. This makes the drum one of the oldest African-American artifacts in existence. Source: BBC
20 of 21

As the inventors of paper, it stands to reason that China was also one of the first to use paper money over 1,000 years ago. This 14th century banknote dates back to the Ming Dynasty, the first dynasty that attempted to completely replace coins with paper money. The note is worth 1000 bronze coins and also bears a warning that counterfeiting it is punishable by death. Source: British Museum
21 of 21