The cast of the man's right lung is the consistency of "Jell-O" and has astounded doctors. 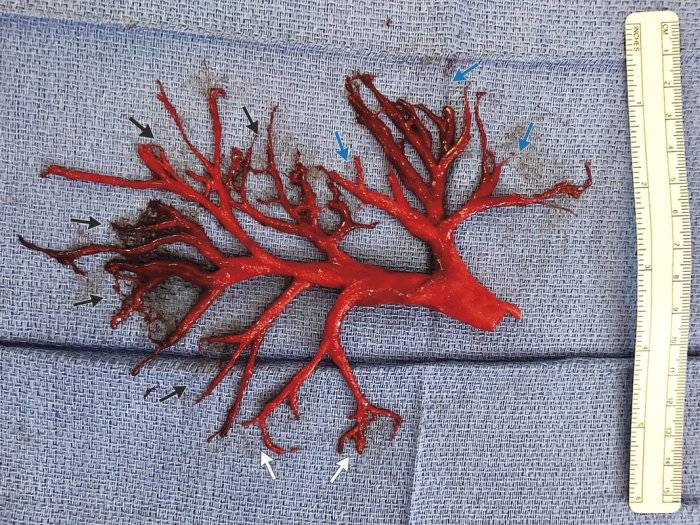 Woodward et al./NEJMThe model of the man’s bronchial branch cast in his own blood clot.

A patient in California coughed up a blood clot that’s the exact shape of a branching air passage in the right side of his lung. After an image of the stunning blood clot was posted to Twitter, it instantly went viral.

The New England Journal of Medicine posted the incredible image of the blood clot to their Twitter account on Dec. 3, and soon enough the story gained traction on both social media and in the press.

The patient actually coughed up a perfectly intact cast of his right bronchial tree, a series of passageways in the lung, in his own blood. It is believed that the blood clot, known as a bronchial cast, was formed from coagulated blood or mucus that accumulated in the man’s lungs.

Bronchial casts aren’t actually that uncommon. A number of these types of blood clots have been reported to have been coughed up over the years. But what’s unique about this latest bronchial cast is its size and its incredible condition.

A 36-year-old man was admitted to the ICU with an acute exacerbation of chronic #heartfailure. After a ventricular assist device was placed & anticoagulation therapy initiated, hemoptysis developed, and he expectorated a cast of the right bronchial tree. https://t.co/QfqeqwWzXt pic.twitter.com/nXW201rjCT

“We were astonished,” the patient’s doctor, Georg Wieselthaler, reported. “It’s a curiosity you can’t imagine – I mean, this is very, very, very rare.”

The patient that the bronchial cast came from is an anonymous 36-year-old man who was admitted to the ICU at the University of California in San Francisco after experiencing acute end-stage heart failure after a long history of cardiovascular disease.

The man’s doctors connected his heart to a device that would help pump blood throughout his body, unfortunately, these devices can also cause blood clots. The doctors also gave the patient anticoagulants to thin his blood.

This proved insufficient. “He had a slow bleed that was ongoing despite the medication,” Gavitt A. Woodard, a cardiothoracic surgery fellow at the university hospital, reported. 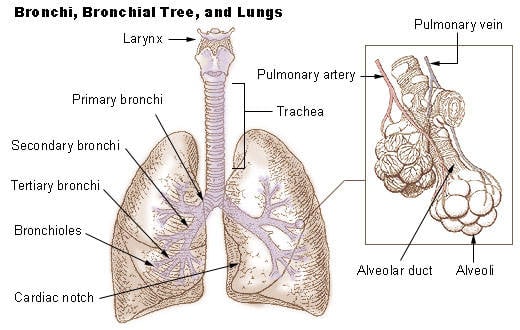 Wikimedia CommonsBronchial tree anatomy in the the lungs.

Blood clots subsequently formed which the man coughed up over the next few days. The first clots that were coughed up were small and cylindrical. But after one incredibly harsh gag, the patient released the six-inch bronchial cast that has taken the internet by storm.

The physicians carefully placed the clot on a surgical towel to take a picture of it. The blood apparently pooled in the patient’s right bronchial tree and solidified “like Jell-O,” according to Woodard, and managed to eject from the man’s body fully intact. “No one on our team has seen anything close to this,” she said.

The patient died a week after expectorating the blood clot, but Woodard says that his untimely passing is unrelated to this incident. The blood clots that he coughed up were just a side effect from the medication he was administered for a wealth of other medical conditions — namely heart failure.