“There are services available to help these folks, and clearly they chose not to ask for any help." 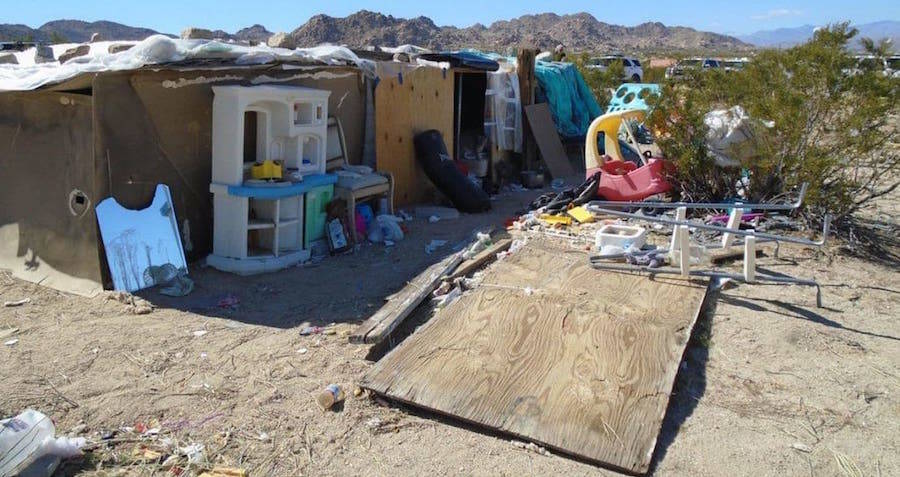 Daniel Panico, 73, and Mona Kirk, 51, were arrested on March 1, 2018 after police found them with their three children living in a plywood box.

The structure was discovered on a remote property about five acres big in Joshua Tree, Calif. while San Bernardino police were doing routine checks around the area.

After coming across the plywood structure, officers inspected further. It was made mostly of plywood, plastic, and metal poles and was about 20 feet long, four feet high, and 10 feet wide. There was no running water, electricity, or food supply.

The makeshift home was surrounded by large piles of garbage and human feces, as well as several large holes according to reports by the San Bernardino County Sheriff’s Department.

There was an abandoned trailer found near the property as well, from which dozens of feral cats were found roaming in and out of.

At first, thought to be abandoned, authorities found three children, ages 11, 13, and 14, inside. Reports indicate that the children had been living there for about four years, along with Kirk, while Panico lived mostly inside the nearby trailer.

The police department released a statement that said, “The victims were found to have an inadequate amount of food and were living in an unsuitable and unsafe environment due to the conditions located on the property.”

The children have since been removed from the area and are now in the custody of family services.

Panico and Kirk are at the Morongo Basin Jail and are being held on a $100,000 bond. They have been charged with willful cruelty to a child. However, in a recent update, it’s been reported that the situation was one of poverty, which hadn’t been specified in the initial police report.

“There are services available to help these folks, and clearly they chose not to ask for any help,” said Cindy Bachman, who is a spokeswoman for the local sheriff’s office. “It’s just tragic that these children were being raised in conditions like this,” Bachman added.

In other sad news, read about the woman from Texas who was charged with animal cruelty for hoarding 111 dogs and cats in her home. Then read the story of the little girl who was found living in a forest with a pack of monkeys.