The incident is the latest in a worrying trend among Chinese employers that take advantage of lax labor laws. 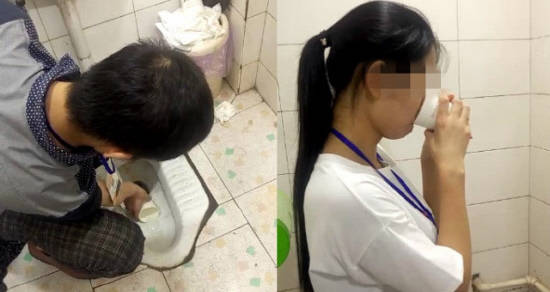 A video now making the rounds across the internet shows employees of one Chinese company being made to drink water from a toilet as punishment for their unsatisfactory performance.

The video clearly depicts the sickening moments when workers are forced to drink from cups filled with toilet water.

According to Shanghaiist, Beijing News reports that the employees depicted in the video work at a Sichuan-based photography studio and were being disciplined for not achieving the goals set out by their supervisor.

One of the women forced to drink this fetid water said that she experienced diarrhea and nausea that prevented her from being able to hold down even small amounts of food without throwing up afterward.

The video was first shared on the company’s group chat via the ubiquitous Chinese messaging app WeChat before being uploaded to the popular Chinese video site Weibo, where it soon went viral and prompted a police investigation, the results of which have not been made public.

However, this is not the first time that employers in China have earned the rage of the internet with their shocking management styles. Last year, a company in Chongqing forced their employees to eat kǔguā, deeply unpleasantly tasting bitter gourds, when they failed to meet sales targets for the month. This was after employees had adapted to punishments that included forced push-ups and laps, and management felt that they had to increase the pain.

Earlier last year, employees at a Rural Commercial Bank in Changzhi were spanked on stage for not “exceeding expectations.” This incident resulted in the firing of many executives after the video of the punishment went viral.

These are all just the latest incidents in an ongoing problem that has long plagued Chinese workers. Labor laws are lax in China, and the ones that exist are often unenforced. This results in frequent abuse of employees by company leadership.

However, many workers are now organizing collectively to bargain for better treatment, with strikes held around the country in protest of abuse and mistreatment of workers.

Next, learn about the handlers at a Chinese research facility who were caught abusing panda cubs. Then, read about how the Chinese government has banned images of Winnie The Pooh because memes were comparing him to Chinese president Xi Jinping.