Countries That Contribute Least To Climate Change Will Be Affected The Most, Study Says

Based on the models used, many of the world’s poorer countries could suffer major social, economic, and ecological consequences. 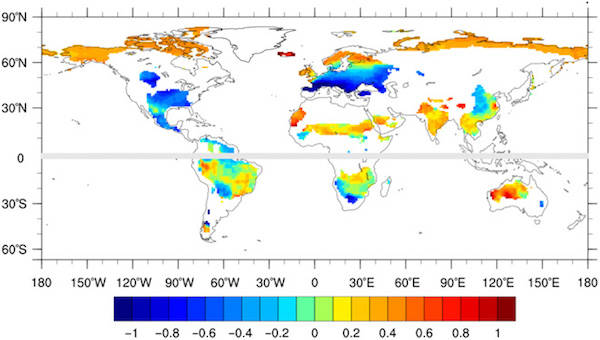 Science Advances Map that shows temperature changes from the standard deviation across the globe.

Even though poor tropical areas contribute the least to greenhouse gas emissions, new research has found that these areas are more vulnerable to extreme climate effects, which can lead to detrimental agricultural, economic, and political consequences.

The research, published in the journal Science Advances on May 2, 2018, analyzed simulations from 37 climate models. The scientists were then able to reach these conclusions about inequality when it comes to climate variability in poorer nations.

All That’s Interesting spoke with the lead author on the study, Sebastian Bathiany from the Department of Environmental Sciences at Wageningen University.

“Like so often in research, we originally had a different aim,” revealed Bathiany. His original focus was on abrupt climate change and how climate variability can be used as an early warning signal of abrupt climate shifts.

“So, we were originally interested to just use climate variability to learn about how much the mean climate will change in different regions,” said Bathiany. “But we then noticed the intriguing pattern with increasing temperature variability in tropical poor countries and decreases elsewhere.”

The decreases elsewhere refer to the lack of climate instability predicted across Europe, North America, and near the Arctic coast. Greenhouse gas emissions are much higher in the United States and other wealthy countries, yet the effects are global, with tropical nations getting the worst of it.

One step countries like the U.S. can take to help rectify this inequality is obvious: reduce greenhouse gas emissions. “In addition,” said Bathiany, “they can of course help the poor countries cope with the negative impacts that will nonetheless occur.”

It’s possible for politicians to incorporate adaptive measures into their agendas in regards to these tropic countries who are seeing things like heat waves and droughts. “But the fact that changes in climate variability hit poor countries most has not been acknowledged so far,” said Bathiany.

Bathiany and his team used the simulation models to figure out how drastically temperatures will swing from the average each month in relation to climate change caused by human activity. They found that outside the tropics, temperature variability, or unpredictability, is projected to decrease on average. Meanwhile, areas like Amazonia and Southern Africa are expected to see a much more substantial increase. During the season with maximum insolation, temperature variability increased by around 15% per degree of global warming in Amazonia and Southern Africa.

This increase can have devastating effects on these regions. One example the study sites is the loss of soil moisture, with the Amazon region being particularly susceptible. Put bluntly by Bathiany, “The Amazon is predicted to become substantially drier as a result of greenhouse gas emissions.” Strong droughts that occurred in the area in 2005 and 2010 support that prediction.

“When the soil becomes drier, it cannot buffer temperature fluctuations as well anymore. Essentially, most of the available energy then goes into heating the air instead of evaporating water,” said Bathiany. i.e the dry soil won’t be able to cool the earth as well efficiently as damper soil. “That’s why temperature fluctuations tend to increase especially in the Amazon.”

If you found this article interesting, you may want to check out this moving look at climate change’s impact. Then take a look at these 25 global warming photos that explain the reality of climate change. Finally, learn all there is to know about climate change with this video overview.