The organization formed after the mass shooting at an elementary school in Newton, Connecticut. 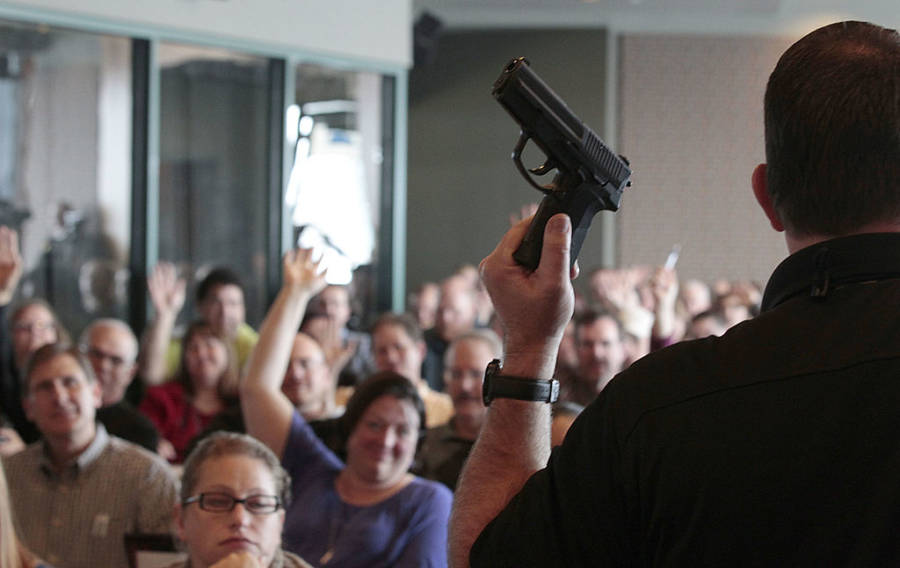 George Frey/Getty ImagesFirearm instructor Clark Aposhian holds a handgun up as he teaches a concealed-weapons training class to teachers.

Seventeen teachers in Weld County, Colorado, are taking part in a pilot program to become “armed first responders” in the case of a school shooting.

They are being trained in a three-day course that was designed by parents, police officers and medical experts as part of the Faculty Administrator Safety Training and Emergency Response Group (Faster).

They want to “allow teachers, administrators, and other personnel to stop school violence rapidly” and to “administer aid where necessary,” the group, which was set up following the 2012 Sandy Hook massacre in Newtown, Connecticut, says.

The teachers are being taken to a shooting range, given physical and mental tests, instructed on basic emergency medical training, and given courses on active shooter situations.

“The kind of training that I have personally received is something beyond what I could have received through the sheriff’s office, just for my conceal-carry permit,” Ronnie Wilson, a program attendee who is opening a charter school of 700 students in the fall, told Fox 31.

The group’s aim is to get one of these trained volunteers per floor, per school building in the States.

Almost every state forbids firearms in K-12 schools, but only 39 states apply this principle to people with conceal and carry permits.

Colorado’s conceal and carry laws have loopholes for teachers who also assume the volunteer position of “security officer,” so the program is legal. But gun control advocates are not happy with the idea of more guns being brought into schools.

Others who disagree with the program note that firearms pose the least amount of danger when handled by police.

“We don’t want to confiscate guns, but we don’t want the proliferation,” Brooke Squires, a Colorado member of Moms Demand Action for Gun Sense in America, said. We have very efficient police men and women. We don’t want novices carrying around guns.”

Laura Carno, the co-founder of Coloradans for Civil Liberties, disagreed.

“There are people who say more guns mean kids could be caught in the crossfire,” she told The Colorado Springs Gazette. “Could a gun in the hands of a teacher have made anything worse than that crazy coward shooting child after child at Sandy Hook with nothing to stop him?”

But what about the psychological issues that go with students knowing their teachers are armed? Or the emotions that will come into play as educators try to adopt a role that they are not truly trained for?

“Who will be responsible on a daily basis to make sure employees are trained? And to what standard?” Ken Trump, the president of National School Safety and Security Services, asked. “Are you going to take the school custodians and give them a once a year training so they can learn to shoot straight?”

These questions will certainly have to be posed as the program gains popularity. Faster has already trained 900 teachers in Ohio in the past five years — and there are at least 20 people on the waitlist for the next session in Colorado.

These teachers need to think about the serious moral uncertainties of the task they’re taking on, Trump said. For example, what if the shooter is one of their students?

“Do you have the mind-set to shoot a kid that two hours earlier you were teaching math to?”

Next, read about why guns send 20,000 kids to U.S. emergency rooms each year. Then, learn how Trump made it easier for people with mental illnesses to purchase firearms.