"She gave me the willies. There aren't any railings. I was not about to get that close to the edge. But she seemed comfortable." 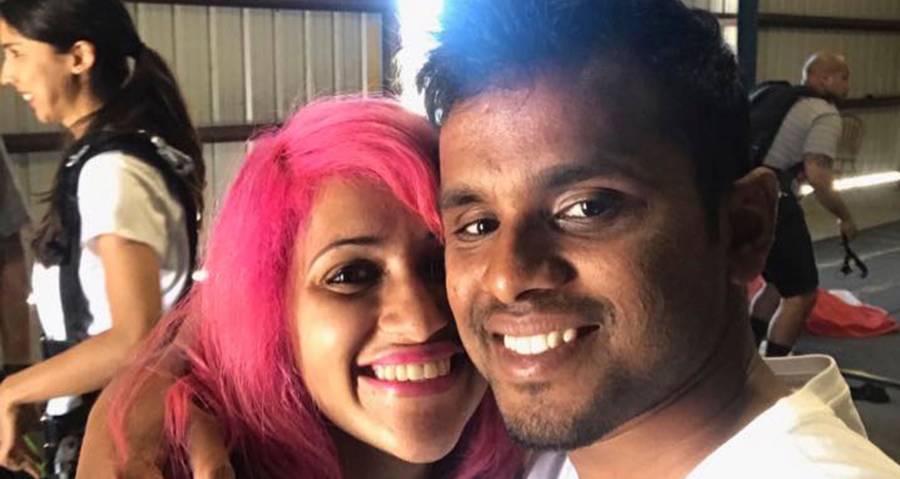 A daredevil couple who jumped from planes, stood on the edge of cliffs, and traveled the world together has died while trying to take a selfie.

The bodies of 30-year-old Meenakshi Moorthy and her husband, 29-year-old Vishnu Viswanath were found 800 feet below Taft Point in Yosemite National Park last week. Viswanath’s brother confirmed that they died while attempting to take a selfie near the edge of the point.

Moorthy was a self-described “adrenaline junkie” and Viswanath snapped photos of his wife in scenic spots while they traveled the world searching for adventure. They operated a now-shut down travel blog called “Holidays & Happily Ever Afters,” and documented their trips on Instagram.

The couple crisscrossed the world, taking gorgeous photos and recording videos of some of their daredevil stunts. For their anniversary last year, they posted a video of Moorthy leaping from a plane on a skydiving trip wearing a shirt that said, “Gimme Danger.”

In an eerie post from March 2018, Moorthy can be seen sitting on the edge of a cliff at the Grand Canyon’s North Rim and the accompanying caption talks about the dangers people go to on their hunt for the perfect selfie.

“A lot of us including yours truly is a fan of daredevilry attempts of standing at the edge of cliffs — and skyscrapers. But did you know that wind gusts can be FATAL???” Moorthy wrote. “Is our life worth just one photo?”

In the caption, Moorthy goes on to mention other people who have died while taking dangerous selfies.

“When we squirm at another selfie attempt gone south from a skyscraper, let’s remember to save that in our core memory and not the memory dump…I know I know, I am guilty as charged for all of this and if I didn’t have Mr. Two Goody Shoes, Vishnu with me, I am not even sure I would have written this post,” Moorthy wrote.

After years of seeking thrills across the world, the couple’s trip to Yosemite would, unfortunately, be their last. The couple allegedly set up their tripod near the edge of the scenic overlook at Taft Point. The next day, visitors saw the camera set up and alerted park rangers.

The rangers used binoculars to look at the ground hundreds of feet below the cliff edge and spotted their bodies. The bodies were then airlifted via helicopter out of the park.

Another couple was sightseeing at the same spot in the park around the same time as Moorthy and Viswanath. This couple snapped a selfie as well and accidentally captured Moorthy and her signature pink hair in the background. Officials believe that this is the last photo taken of Moorthy before her death. 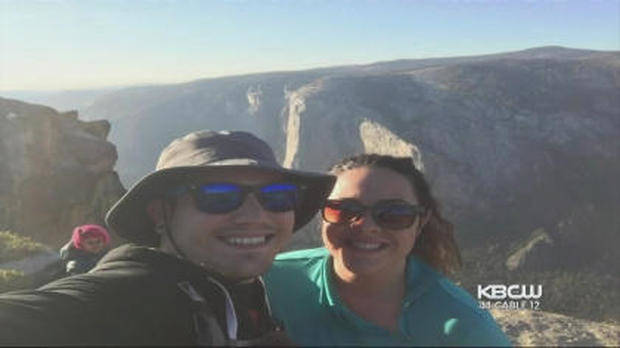 Sean Matteson, who took the selfie, said he remembered seeing Moorthy that day and noted that she seemed to be hovering a little too close to the cliff’s edge.

Selfie-related deaths are on the rise across the world. According to a recent study, 259 people died between October 2011 and November 2017 while attempting to take a dangerous selfie. 48 of those deaths were caused by people falling.

Everyone is guilty of doing crazy, or even dangerous, things to capture the perfect selfie, but sad instances such as this remind us to think twice before snapping the shot.

Next, take a look at the selfie trend put into perspective and discover the total number of selfie-related deaths since 2014. Then read the story of a woman who fell from a 730-foot bridge while taking a selfie.