The Most Popular Murder Weapons Around The World, By Region 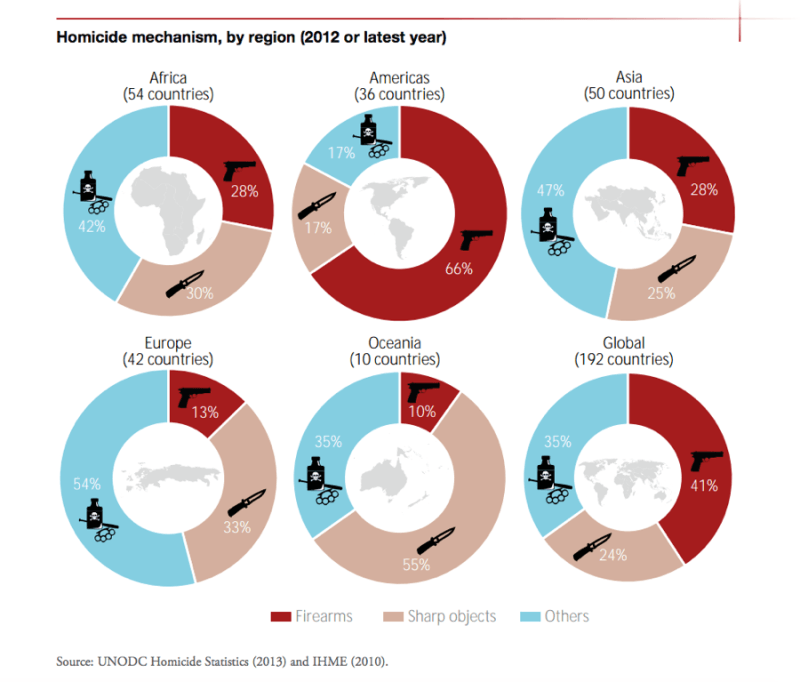 It may not be surprising that firearms are the deadliest weapons in the world, accounting for about four out of every ten global homicides. But perhaps that’s only unsurprising to those of us who live in the gun-riddled United States. And what is surprising, no matter where you live, is just how much the murder weapon of choice varies by region.

According to the United Nations Office on Drugs and Crime’s Global Study on Homicide (last issued in 2013), the deadliest weapons around the world vary wildly by region. In fact, the leading global homicide weapons — firearms — are only the leading weapons in one of the world’s five regions.

That region is, without an iota of surprise, the Americas. And that region’s biggest offender is, of course, the United States. By far the global leader in gun ownership, with 112.6 guns per 100 residents, the United States now has more guns than people. The next closest country? Yemen, with 54.8 guns per 100 residents. The next closest country with a similar UN Human Development Index? Switzerland, with 45.7.

The UN’s study adds that available evidence suggests a causal relationship between firearm availability and homicide rate, but isn’t totally conclusive. Nevertheless, the graph above paints a striking, appalling picture of firearm homicide in the Americas.

Disturbingly, gun ownership has only gotten more disproportionate, with the amount of guns per 100 people rising 27% in just the three years since this study was conducted.

For more on how we kill, and any and all other information related to homicide around the world, read the full study.