Discovered in 1988, the fossil was incorrectly classified and relegated to a museum drawer. It's now been identified as the jaw of a saber-toothed creature that was one of the first carnivorous mammals on Earth. 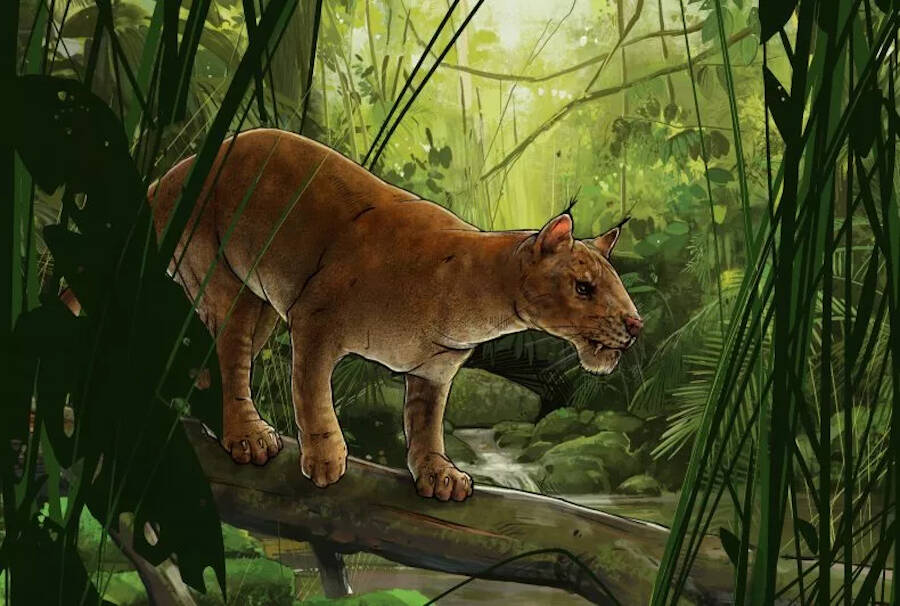 San Diego Natural History MuseumAn illustration of the Diegoaelurus vanvalkenburghae in what is today San Diego.

Most newly-discovered species are typically found during archaeological excavations in the great outdoors. Paleontologist Ashley Poust, however, was digging through the fossil library of the San Diego Natural History Museum when he unearthed fossilized evidence of the oldest known saber-toothed predator in the world.

The fossilized jaw was originally found at a construction site in Oceanside, California. For years, it was listed as the fossilized remnant of a potential new species from the nimravid family of saber-tooths, which were closely related to cats. But when Poust took a closer look, he made a staggering discovery.

As published in the PeerJ journal, Poust’s study showed the fossil was 42 million years old and belonged to a species that evolved before cats even existed. Dubbed Diegoaelurus vanvalkenburghae, it hunted its prey in the prehistoric jungles of what is today San Diego and learned how to thrive only on meat — a first for mammals at the time.

“Today the ability to eat an all-meat diet, also called hypercarnivory, isn’t uncommon,” said Poust. “Tigers do it, polar bears can do it. If you have a house cat, you may even have a hypercarnivore at home. But 42 million years ago, mammals were only just figuring out how to survive on meat alone.” 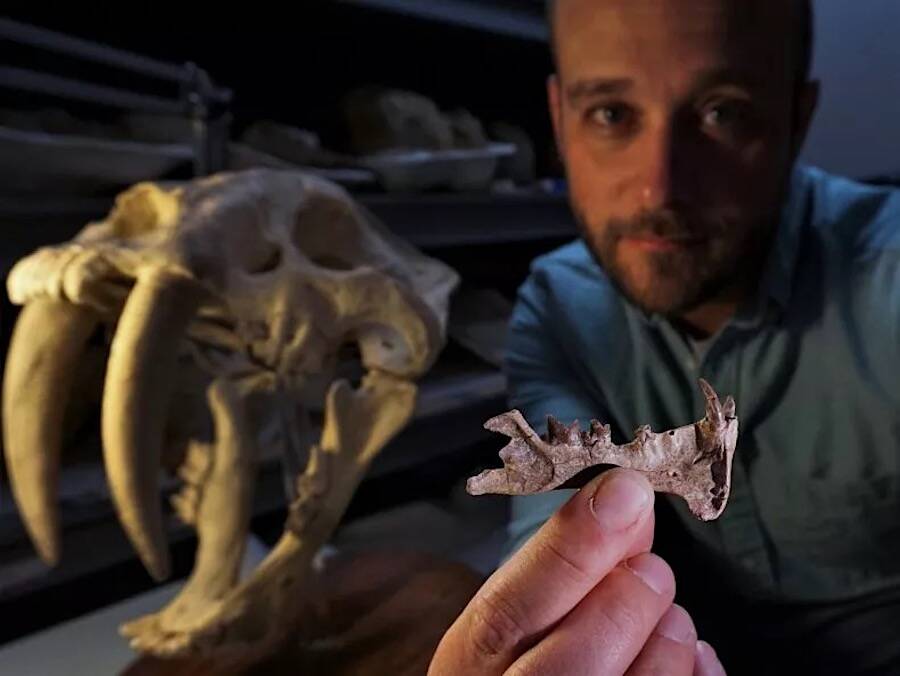 According to Science Alert, the fossilized jaw was unearthed from a rock bed called the Santiago Formation near San Diego in 1988. The site itself dated back to the Late Eocene epoch, when climates in California were far more humid.

“The Santiago Formation fossils show us a forested, wet California where tiny rhinos, early tapirs, and strange sheep-like, herbivorous oreodonts grazed under trees while unusual primates and marsupials clung to the canopy above,” said Poust.

“This richness of prey species would have been a smorgasbord for Diegoaelurus, allowing it to live the life of a specialized hunter before most other mammals.”

Poust noted that the jaw had several scimitar-shaped fangs, which are curved and recognizable as those of a saber-tooth. Identified as part of a subfamily of extinct cats called Machaeroidinae (meaning “dagger-like”) however, these fangs differed greatly from those of its closest known relative.

“Nothing like this had existed in mammals before,” said Poust. “A few mammal ancestors had long fangs, but Diegoaelurus and its few relatives represent the first cat-like approach to an all-meat diet, with saber-teeth in front and slicing scissor teeth called carnassials in the back.”

“It’s a potent combination that several animal groups have independently evolved in the millions of years since,” he continued. “One big advance was to evolve specialized teeth for slicing flesh — which is something we see in this newly described specimen.” 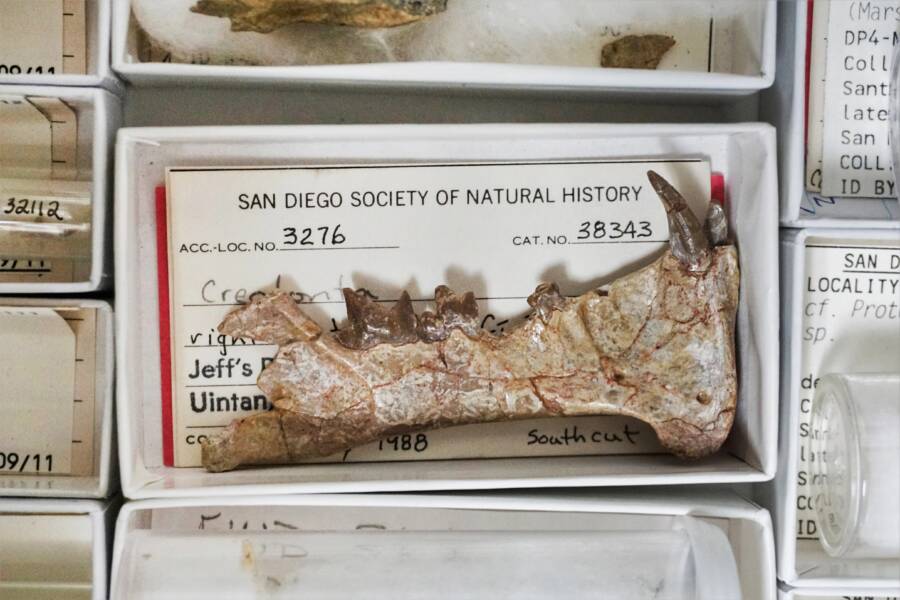 The size of a bobcat, this species lived west of the Rocky Mountains and had a long face and a bony chin. According to Newsweek, Poust and his peers posited that this species was an evolutionary experiment to see if animals could survive by exclusively eating meat.

Naturally, the most captivating theory here is that this was the first carnivore to develop saber-teeth. The study noted that the Diegoaelurus thrived far earlier than the Smilodon fatalis. That famous creature, commonly referred to as the saber-toothed tiger, only first appeared 1.6 million years ago and went extinct about 10,000 years ago.

Furthermore, confirmation that Diegoaelurus was part of a subfamily of the Machaeroidinae has allowed experts to more clearly study the latter. Machaeroidinae are not only long-extinct but haven’t been linked to any known carnivores still living today.

“This relatively complete, well-preserved Diegoaelurus fossil is especially useful because the teeth let us infer the diet and start to understand how Machaeroidines are related to each other,” said Shawn Zack from the University of Arizona College of Medicine.

In the end, it’s remarkable what a prehistoric fossil can tell us about our planet. Preserved in the dirt before the Gulf of California even existed, when there were no grasslands in the region and San Diego was a lush cornucopia of now-extinct animals, this simple jaw serves as a time machine to a world long gone.

For now, that time machine is the only one of its kind — and is being rigorously studied at the museum in which it was rediscovered.

After reading about the oldest saber-toothed predator, learn about the discovery of a huge saber-toothed tiger skull. Then, read about Earth’s oldest-known meteor crash site discovered in Australia