"There is a violent woman over here hitting my mom, she also hit me," the owners' son said to 9-1-1 dispatchers. 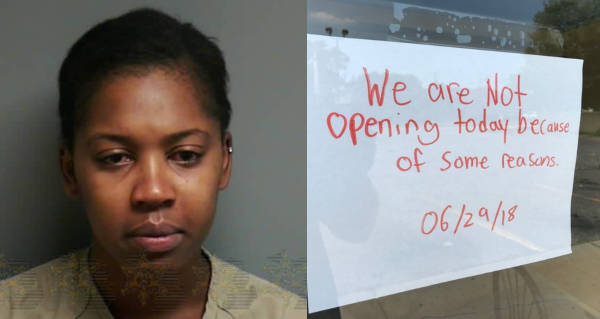 Macomb Daily NewsJade Anderson and the sign on the restaurant’s door the following afternoon.

In a bizarre incident at a Chinese restaurant in Mount Clemons, Mich., a woman unhappy with her food order wound up biting off a chunk of the restaurant owner’s ear.

The Macomb Daily reported that Jade Anderson ordered from China 1 Restaurant on the evening of June 28. According to deputies, the 24-year-old woman walked into the establishment to complain about her order to the owners, a husband and wife.

The owners were having trouble understanding the woman so they asked their son, who is reportedly between the ages of 8 and 11, to translate. While the son was translating what Anderson was saying to his parents, she allegedly became irate and threw her food to the floor before hitting the son and pushing him out of the way.

She then started attacking the wife, at which point her husband stepped in to protect her. While pushing Anderson out of the store, Anderson bit the male victim on the ear.

The frightened son dialed 9-1-1, telling the dispatcher over background screams, “There is a violent woman over here hitting my mom, she also hit me.”

The dispatcher asked who the woman was and the boy responded, “I don’t know, I’m scared.”

Sgt. Renee Yax said deputies arrived on the scene at around 9:40 p.m. to find the male victim with part of his ear detached. He was brought to the hospital and the female victim, who had a large bump on her head, was treated for her injury.

Anderson was taken into custody and brought to the Macomb County Jail.

Although the names of the victims haven’t been released, according to Mount Clemens tax records, The China 1 property is owned by Byung Kim and Young Kim.

A sign on the restaurant door the following afternoon read, “We are not opening today because of some reasons. 06/29/18.”

According to deputies, she had also left a small child at home unsupervised during the incident. The deputies said they arrived at her residence and turned the child over to a responsible adult.

Reports said doctors will be able to reattach the owner’s ear.

The reason for Anderson’s complaint hasn’t been disclosed. She is being held on a $20,000 cash bond and is due back in court for a hearing July 11.

Next read about a woman who screamed at a veteran with PTSD for having his service dog in a resteraunt. Then read about the camel who bit off its owner’s head after being tied up in the heat all day.