Very Good Dog Finds $85,000 Worth Of Heroin In Owners’ Backyard 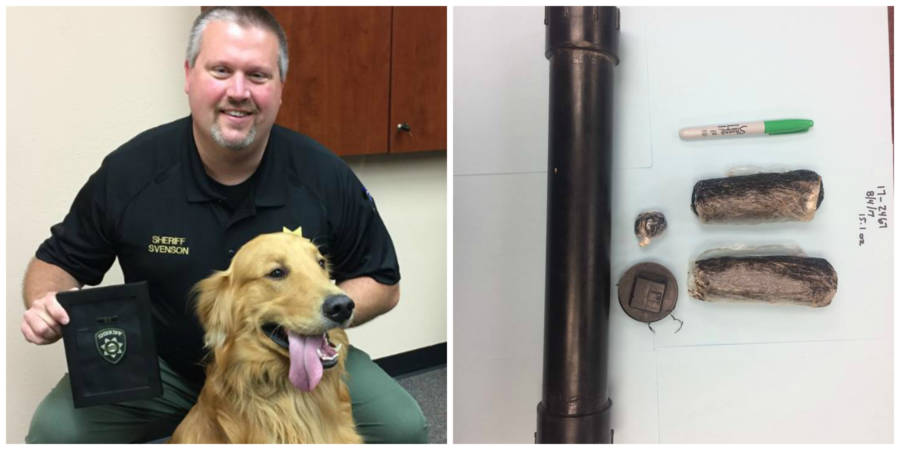 Talk about a good game of fetch.

A 18-month-old golden retriever earned an honorary spot on his local K-9 force after finding 15 ounces of black tar heroin in his owners’ backyard.

Kenyon, as he’s affectionately known, was playing with his owners (who requested not to be named) in their backyard in Yamhill County, Oregon, when he stumbled upon what his owners thought was a time capsule. They pulled out their video camera to film themselves opening it, hoping for a big reveal, but unfortunately didn’t find exactly what they were looking for.

Upon opening the package, the family realized it wasn’t a time capsule, but more likely some sort of controlled substance. They immediately alerted the authorities, and police arrived to confirm that what Kenyon had found was indeed 15 ounces of black tar heroin, an amount worth roughly $85,000.

“Opioid addiction and overdose deaths are on the rise and with the help of Kenyon, this large quantity of heroin is removed from our community,” said Yamhill County Sheriff Tim Svenson.

In a recent study done by Wallethub, Oregon ranked sixth in the country for worst drug problem. According to federal data, most of the problem can be be attributed to misuse of opioids, such as black tar heroin and prescription painkillers.

“We have a massive problem,” said Mark Kruger, captain of the Portland Police Bureau’s drugs and vice division, and 23 year veteran of the police bureau. “We’re seizing larger quantities of methamphetamine and heroin and cocaine in Portland, Oregon than we have historically ever seized.”

Understandably, the police force was grateful for Kenyon’s efforts. For all of his hard work — and playful digging — Kenyon was awarded a Yamhill County K9 citation ribbon, and named an honorary K-9 narcotics officer for life, planting him firmly in the realm of “very good boy.”

While a playful game of fetch might have turned into something exciting for this family, it’s hardly the first time ridiculous amounts of drugs have been found in equally ridiculous places.

In 2010, an 80-year-old Georgia man purchased a painting at an auction at his local post office. Five years after hanging it on his wall, he decided to sell it at another auction. A family member noticed the uneven weight distribution while helping the owner move it, and upon removing the painting from its frame, discovered four pounds of marijuana taped to the inside, totaling roughly $5,000.

Again in 2014, an Ohio woman found a $12,000 stash of marijuana inside the spare tire of her new car. Police said the vehicle had likely been manufactured to be a smuggling car, but had gotten accidentally added to an actual dealership lineup somewhere along the way.