The tree flickers brightest when Wattson is being fed. 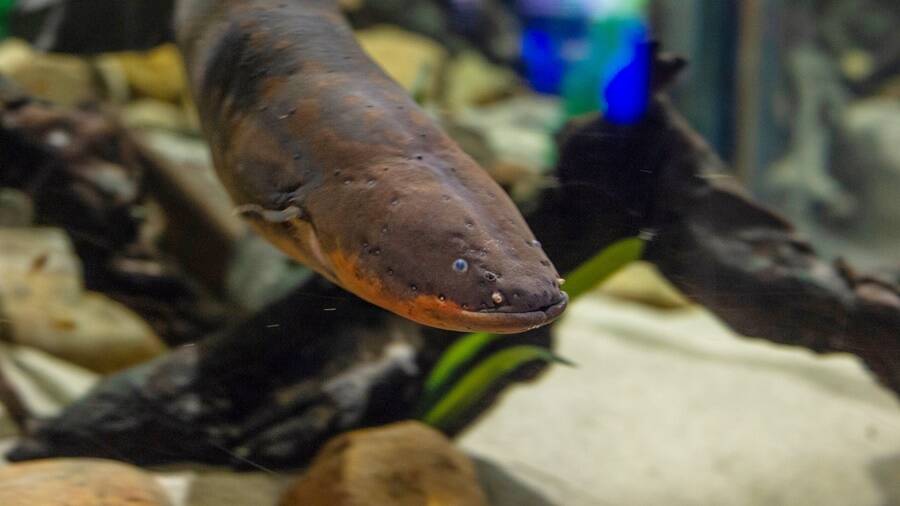 ‘Tis the season for Christmas decorations. But no place is shocking visitors with its festive display more than the Tennessee Aquarium where an eel named Miguel Wattson powers a Christmas tree beside his tank.

According to the Washington Post, engineers at the aquarium in Chattanooga, Tennessee, have built a system which harnesses the power Wattson produces and transmits it to a nearby Christmas tree and soundsystem.

It’s a fascinating display as is, but the system itself is quite simple.

“Whenever Miguel discharges electricity, sensors in the water deliver the charge to a set of speakers,” the aquarium’s audiovisual production specialist, Joey Turnipseed, explained in a press release. This result is a series of kabooms and twinkles of light that vary in intensity based on Wattson’s moods.

“The speakers convert the discharge into the sound you hear and the festively flashing lights,” Hurt added.

Decked out in tiny bulbs of blue, yellow, green, and red, the tree allegedly flickers brightest when Wattson is being fed.

“When we drop pieces of food in, Miguel gets really excited and he goes with those high-voltage shocks after the food items trying to stun them,” Aquarist Kimberly Hurt told the Canadian Broadcasting Corp.

“The bigger flashes are caused by the higher voltage shocks he emits when he’s eating or excited.”

The Christmas tree lights up the brightest when Wattson is being fed.

Incredibly, just as he lights up the Christmas tree with his own power, so is he able to send out these tweets on his own.

Designed by Evgeny Vasilyev, who was then a computer science intern at Tennessee Tech University, the electric shocks generated by Wattson are picked up by sensors connected to a “fuse box” that is synced with a computer program.

If he puts out enough voltage, the shocks automatically send out tweets from Wattson’s account which has about 38,000 followers and counting.

According to naturalist Sy Montgomery, there’s even evidence that these animals generate electricity in their sleep — which could be evidence that they actually dream. But this phenomenon continues to be studied by biologists.

Wattson isn’t the only electric eel whose feelings have been translated into flickering lights for visitors.

An electric eel at the New England Aquarium powers up a voltmeter about his tank.

At the New England Aquarium in Boston, aquarists set up a voltmeter that is hooked up to their electric eel’s tank. The volts produced by the eels are translated onto the voltmeter which shows just how much power the animal is generating at any given moment.

Wattson’s Christmas display is part of the aquarium’s new holiday exhibit, Holidays Under the Peaks, which lasts through Christmas eve.

Next up, learn the unbelievable history behind the Christmas tree tradition. Then, read about that time when World War I went on a brief hiatus for Christmas.