Eli Gregg was running around with a 10-inch knife when he fell, directly impaling his face with the blade, and rushing to his mom for help. Fortunately, ingenious doctors knew exactly what to do. 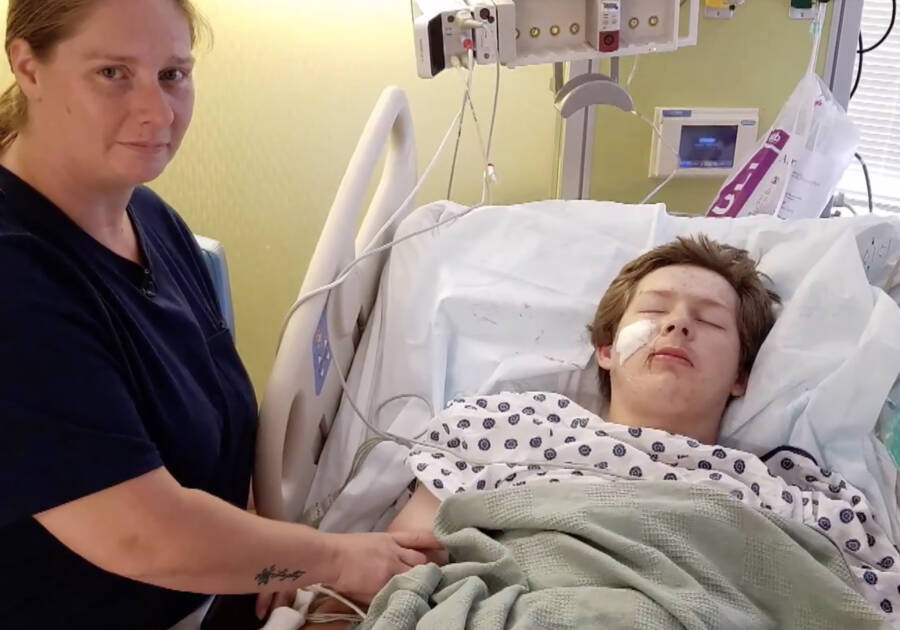 University of Kansas Health SystemWhen Jimmy Russell heard her son scream, she assumed he was just playing around with his friends. She quickly learned otherwise.

The odds of surviving a 10-inch knife to the face are fairly slim, with one family in Kansas seemingly drawing the lucky straw. According to HuffPost, 15-year-old Eli Gregg was playing around with neighborhood friends last weekend when the incident — which nearly killed him — occurred.

Eli’s mother, Jimmy Russell, was in her Bourbon County home that Saturday when she heard the scream. She initially thought nothing of it, as teenage boys playing outside produce all types of loud, unprompted noises. She quickly discovered that this one was different.

“He came to the door, and when he opened the door, it was blood and he had a piece of metal in his face,” said Russell. “And it was really shocking.”

Unfortunately, Eli’s innocuous horseplay involved a sharp 10-inch knife. All it took was an unintentional fall for him to get the blade lodged in his skull — piercing his face but miraculously stopping short of his carotid artery.

While doctors were able to remove the knife and save the boy’s life, the process wasn’t easy, and involved some impressive medical ingenuity to accomplish.

An Associated Press segment in which Eli Gregg’s mother explains the traumatic sequence of events.

An ambulance rushed Eli to a nearby children’s hospital, but this particular injury was so precarious that the doctors there recognized the need for a specialist. The knife was simply too close to the boy’s carotid for them to casually attempt removing it from his skull.

The primary concern was causing a stroke or massive, irrevocable bleeding that could endanger Eli’s life. It was a smart move, as Dr. Koji Ebersole and his team at the University of Kansas Health System knew exactly what to do.

“It could not have had a pound more force on it and him survive that event,” said Ebersole. 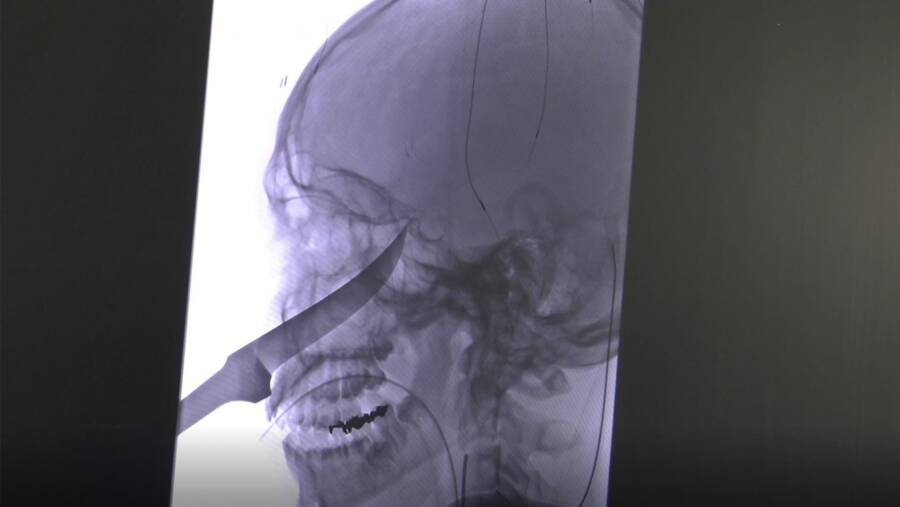 University Of Kansas Health SystemDr. Ebersole explained that one more pound of pressure on the knife would have killed Eli.

Since even the slightest tear or cut on the artery would have prompted intense bleeding, they had to ensure the blood supply to the area remained constant and unimpeded.

To do so, both catheters and balloons were employed, before the process of taking the blade out could begin. The surgeons involved decided on using a vise to get a proper grip on the knife to provide a more reliable grip and control while pulling it out. 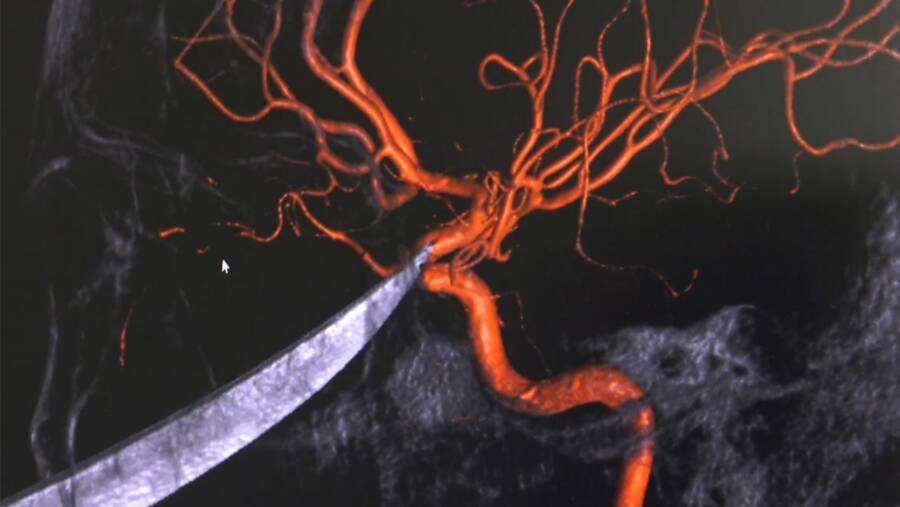 University Of Kansas Health SystemAs seen on this digital model of the area, the blade was already indenting the carotid, and close to unleashing mass amounts of blood.

In a remarkable feat of modern medicine, they finished the procedure without a hitch. Eli is now back to normal — though he’s on antibiotics and has a pretty cool new scar on his face.

“He’s got some healing to do, but he’s out of danger for the most part,” said Russell.

The brave teenager fortunately also seemed to have learned from this horrifying experience, telling “Inside Edition” that he’s going to “stay away from sharp objects.”

After learning about the Kansas teen who survived impaling his face with a 10-inch knife, read about the teen who killed himself to win social media’s disturbing “Blue Whale Challenge.” Then, learn about the parents who killed their baby with a gluten-free diet.