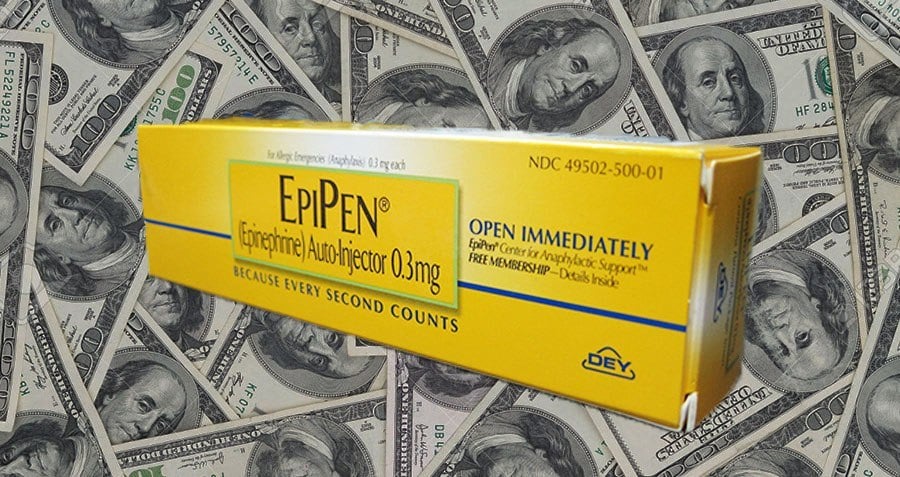 Pharmaceutical company Mylan has recently fallen under harsh public criticism after jacking up the price of EpiPen, a device which provides an emergency dose of epinephrine to those suffering from a severe allergic reaction.

Now critics have something else to sustain their ire: In addition to raising the emergency drug’s prices (and the prices of other drugs the firm owns) over the years, executives gave themselves equally dramatic raises.

While changes in insurance co-pay and deductible structures have revealed the price hikes to consumers just recently, price hikes have been the name of the game since the company acquired EpiPen in 2007.

After the company bought the rights to the device, it experimented with different price hikes, beginning with a hike of five percent in 2008 and 2009 and then a 19 percent hike in 2009. From 2010-2013, the company steadily raised the price ten percent each year, NBC News reported. From the fourth quarter of 2012 to the second quarter of 2016, NBC News reports that prices rose 15 percent every other quarter.

Bolstered by increased revenue under Bresch’s leadership, Mylan invested much more in lobbying — jumping from spending $270,000 on lobbying to $1.12 million in a single year, according to Open Secrets.

This investment bore significant legislative fruit. In 2010, NBC News writes that the FDA encouraged doctors to prescribe EpiPen to more individuals than those with confirmed allergies, and that two pens be sold per pack. In 2013, the federal government began awarding block grants to public schools that keep the device in stock.

Following these improvements to the company’s bottom line, Mylan saw stock prices rise and the drug’s sales compose 40 percent of its operating profits in 2014, Bloomberg reported.

Meanwhile, some members of Congress have called for a federal investigation into EpiPen’s price increases, citing potential violations of antitrust laws and a general concern about how a lack of affordability may affect public health. Indeed, as Sen. Charles E. Grassley (R-Iowa) said, the drug costs are so high that “some first responders [must] consider making their own kits with epinephrine vials and syringes.”

“I am concerned that the substantial price increase could limit access to a much-needed medication. In addition, it could create an unsafe situation for patients as people, untrained in medical procedures, are incentivized to make their own kits from raw materials,” he said.

It should be noted that the actual medication isn’t expensive. The Washington Post reports that the dosage a single pen contains is worth $1; it’s Mylan’s proprietary injector that makes up most of the cost.

For a glimpse of pharmaceutical justice, check out this photo of Martin Shkreli’s arrest by the FBI.