"It was a horror," one ex-member said. 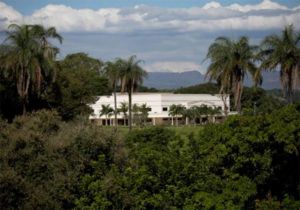 The Word of Faith church says on its website that “true Christians are Christlike.” But did Christ treat his followers like slaves?

The question may seem absurd, but so too is the notion that a church would force members into unpaid labor and subject them to physical abuse.

And yet, that’s precisely what ex-members of the Word of Faith Fellowship are alleging.

“They kept us as slaves,” Andre Oliveira told the Associated Press.

When Oliveira was just 18 years old, he left Brazil for the Spindale, North Carolina-based church — perhaps anticipating doing some volunteering with a community committed to spreading the gospel; maybe even finding a partner who held similar values.

Instead, he found 15-hour workdays, occasional beatings, and pressure to keep quiet about what transpired within the evangelical church’s walls.

And Oliveira’s story is just one of dozens:

According to an ongoing AP investigation — which is based on interviews with over 40 former members, documents, and secretly-made recordings — the church has set up international branches in sites such as Brazil, where it funnels in laborDuring these visits, congregation leaders tell locals that they can “improves their lives and relationships,” learn English, travel throughout the U.S., and perhaps even attend college.

Those who agree to the terms — that they may have to do some occasional “volunteer work” — then make their way to the U.S., where, as happened with Oliveira, their passport and money may be confiscated by church leadership.

Men who arrive at the church are often made to work in construction — like ripping out walls and installing drywall in properties owned by a senior church minister — and women work as babysitters and in the church’s school.

This work, however, violates the terms of a U.S. tourist visa, which many of these arrivals had and which prohibits holders from performing work for which they would normally receive compensation.

Three former members of the church attempted to remedy the situation in 2014, when they told then-assistant U.S. attorney Jill Rose that Brazilian arrivals were forced to work without pay.

“And do they beat up the Brazilians?” Rose, now the U.S. attorney in Charlotte, asked in the secret recording.

“Most definitely,” one ex-congregant said. Ministers “mostly bring them up here for free work,” another said.

Rose then vowed to “take a fresh look at it.”

However, months after the meeting passed, the former congregants said that Rose never responded to repeated requests for contact. Rose likewise declined to comment to the AP.

And while many of those members have come to the U.S. in hopes of finding community and purpose, they have instead found entrapment.

Former church members do not see an end in sight.

“When you’re a foreigner, and you don’t have a passport, you can’t go anywhere,” former congregant Jay Plummer, who supervised some of the Brazilians, said. “You can’t go down the street and ask for help without your passport. And they know that.”

For more religious quacks, check out the story of ZZyzx, the weirdest town in the U.S..