The satirical French weekly hasn't shied away from lampooning Islam since the deadly attack on its office in 2015. This week is no different.

French satirical weekly Charlie Hebdo is making waves again, this time with its response to last week’s terror attack in Barcelona plotted by a dozen men of Moroccan origin. Fourteen people died and more than 100 others were injured in the attack.

The magazine is no stranger to controversy, especially when it comes to its treatment of politics and religion. That includes Islam, which it has repeatedly lampooned. In January 2015, two Muslim gunmen went on a rampage at Charlie Hebdo’s offices and killed 12 people, including editor-in-chief and cartoonist Stéphane Charbonnier. The attackers left the scene shouting, “We have avenged the Prophet Mohammed!”

Since that deadly attack, the magazine’s staffers have been undeterred by concerns about political correctness and even their own safety. The cover of this week’s edition makes that much quite clear: 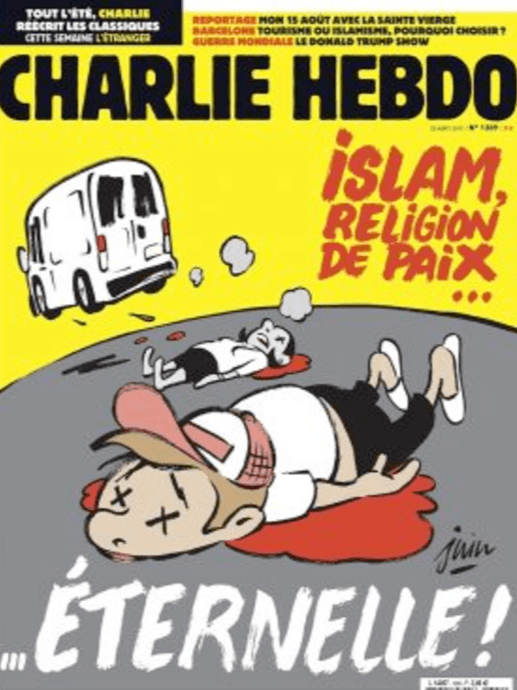 The words translate, “Islam, eternal religion of peace!” in what is no doubt a jab meant to mock defenders of Islam who insist that the religion is peaceful. In the magazine’s editorial, editor Laurent Sourisseau said European politicians are avoiding the issue of radical Islamic terror because of concerns about offending Muslims.

“The debates and questions about the role of religion and in particular the role of Islam in these attacks have completely disappeared,” he wrote. Sourisseau’s claim is hardly without merit. Immediately after the 2015 attack on Charlie Hebdo’s office, French President Francois Hollande had many scratching their heads when he said of the perpetrators, “These fanatics have nothing to do with Islam.” This, despite the fact that the attackers declared that the had avenged the Mohammed, Islam’s prophet.

Not surprisingly, the cover has its detractors on Twitter. Meanwhile Socialist MP Stephane Le Foll told France’s The Local that the cover is “extremely dangerous.”

“When you’re a journalist you need to exercise restraint because making these associations can be used by other people,” said Le Foll.

Even after the 2015 attack on Charlie Hebdo’s headquarters that saw much of its staff murdered, the magazine faced a rash of criticism for its past treatment of Islam. Huffington Post and Salon ran especially critical articles that almost, but not quite suggested the cartoonists might have had it coming. In response to the criticism of Charlie Hebdo’s willingness to mock Islam, prominent atheist and neuroscientist Sam Harris offered a terse rebuttal: “People have been murdered over cartoons. End of moral analysis.”

Charlie Hebdo does not limit its caricatures to Islam. Indeed, the magazine has targeted Christianity on numerous occasions and often in the most obscene ways. Yet, the magazine has never been violently attacked for publishing these cartoons.