After a few minor setbacks and problems with mold, astronaut Scott Kelly announced that the first flower has bloomed in space. 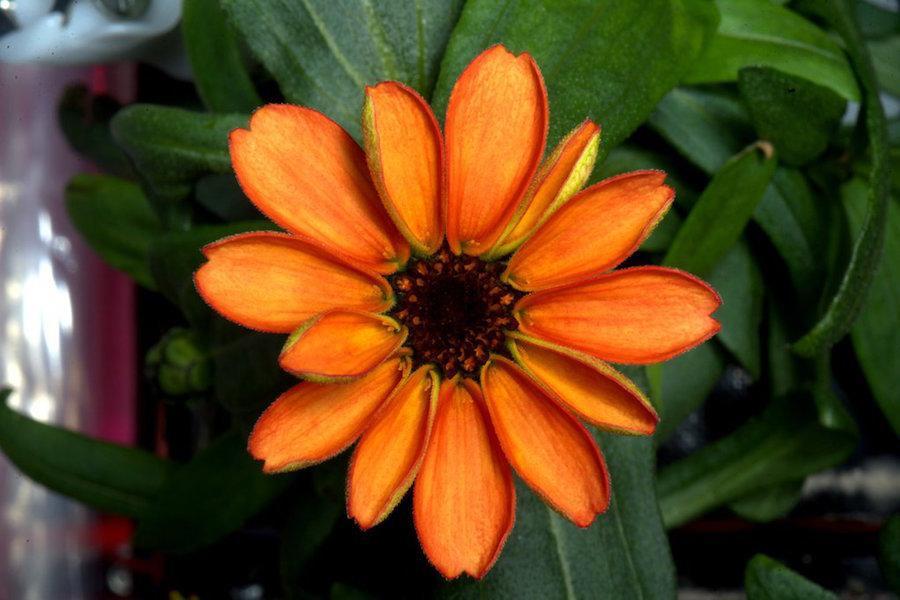 The first flower to bloom in space was a zinnia flower.

Space got a little more colorful over the weekend when a flower bloomed on the International Space Station (ISS). United States astronaut Scott Kelly broke the news on Twitter, sharing the above photo of a zinnia plant aboard the ISS:

Zinnias are the second plant to be tested in the ISS Veggie lab, and were chosen to test how plants flower in a low gravity environment. Like the lettuce grown before it, zinnias are edible. While blooming now, astronauts weren’t sure they’d make it: questions over the viability of the zinnia plants came up in December after Kelly tweeted a photo of mold growing on the zinnia’s leaves.

NASA put out a blog post explaining why, even though the mold seemed like a failure, it was a successful opportunity for scientists to understand how plants grow in the harsh, aeonian environment of space.

“While the plants haven’t grown perfectly,” Veggie science team leader Dr. Gioia Massa told the NASA blog, “I think we have gained a lot from this and we are learning both more about plants and fluids and also how better to operate between ground and station. Regardless of the final flowering outcome we will have gained a lot.”

The plant is more sensitive to its environment and light conditions than lettuce, and it takes longer to grow. Getting the zinnia to flower, said Veggie project manager Trent Smith, is a precursor to growing tomato plants. In addition to the obvious food potential of edible plants, flowers offer psychological benefits as well.

“In future missions, the importance of plants will likely increase given the crews’ limited connection to Earth,” Alexandra Whitmire, a scientist for the Behavioral Health and Performance section of the NASA Human Research Program, told the NASA blog. “Studies from other isolated and confined environments, such as Antarctic stations, demonstrate the importance of plants in confinement, and how much more salient fresh food becomes psychologically when there is little stimuli around.”