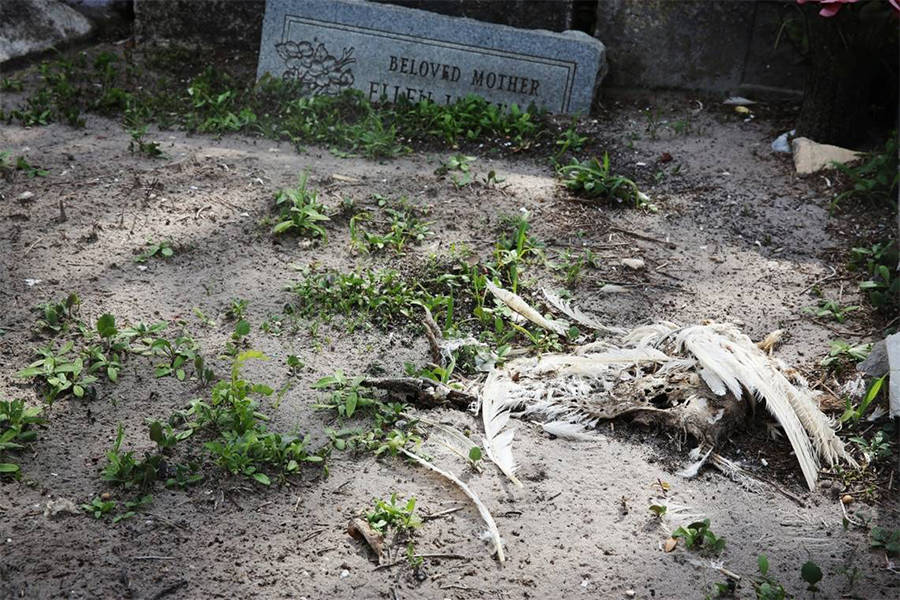 Miami HeraldA chicken carcass is left to decompose in front of a woman’s grave.

Miami’s most historic cemeteries are being vandalized by grave robbers, drug addicts, and Santeria worshippers, according to the Miami Herald.

Over the past couple of months, graves as old as 100 years have been broken into and ransacked. The bodies of dead animals have also been found strewn across graves and left to decompose.

Arthur Kennedy, the caretaker of the Lincoln Memorial Park which was broken into two months ago, told the Herald he’s had to remove the carcasses of rabbits, chickens, a monkey, and even a boar’s head from the cemetery.

“We got some serious voodoo and hocus pocus out here,” he said.

Some visitors leave less offensive offerings, such as candies, cigars, and coins.

While the presence of animal carcasses and other offerings is worrying, the caretakers and owners of these cemeteries are becoming increasingly concerned with what isn’t at the graves: the bones of those who were buried there.

Many of the caretakers blame local voodoo religions, such as Santeria, Palo Mayombe, and Palo Monte, that use human remains in their rituals and practices. Though Santeria does not use human bones in its rituals, a number of followers of the religion have been known to possess and collect them, citing religious purposes. 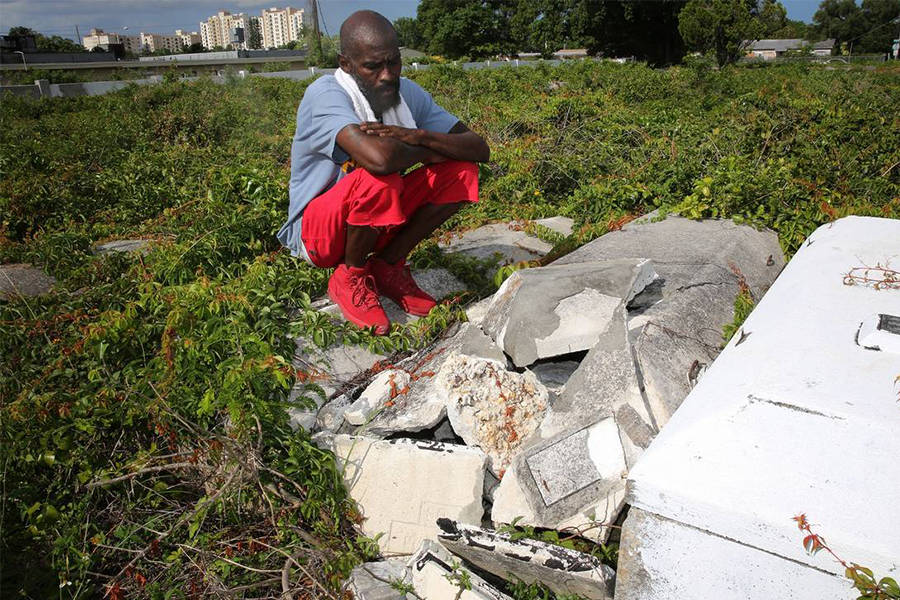 Miami HeraldArthur Kennedy kneels over one of the vandalized graves in the Lincoln Memorial Park.

Though many practitioners of voodoo procure their remains through medical supply companies, cemetery caretakers have seen their share of bartering and thieving.

“There’s a lot of witchcraft going on, and I’ve been offered $1,000 for a skull,” Kennedy said. “It’s inhumane how they’re attacking the dead and dismantling the graves. Our history is buried in these cemeteries.”

Ronnie Hurwitz, caretaker of Miami City Cemetery, said his graves have also been vandalized. Headstones have been toppled, animal carcasses have been left, and flags have been stolen.

“A goat’s leg, a pig’s head, little cups of espresso, voodoo dolls,” he said. “Every Sunday the grave of Lt. Gen. N.I. Egoroff of the Russian Imperial Army is covered with sweets—only sweets.”

The Evergreen Memorial Park, a predominantly black graveyard, has seen the worst of the vandalism. In just one month, over 20 graves were destroyed. There are no full-time caretakers, though Kennedy and Hurwitz patrol the area “occasionally.” For the most part, the cemetery is a meeting ground for homeless people, drug addicts, and prostitutes.

Asking them to leave poses a threat to the caretakers, who receive little to no assistance from law enforcement.

“I got shot once,” Kennedy said, of how one altercation went. “Guy pulled a gun on me when I told him to get out.”

Though the cemeteries are historic sites, they aren’t afforded many protections by the city. Though task forces were assembled as far back as the 1970s to clean up the areas, they lacked adequate funding. Over time, the areas have become neglected, serving as makeshift homeless shelters.

Their locations and the easily accessible graves also make them the perfect target for vandalism. Due to the area’s high water table, caskets aren’t buried but are placed in concrete vaults above ground, making them easy to break into. More and more concrete slabs are found in pieces throughout the cemetery each month.

Though there aren’t many resources being dedicated to protecting these sites, Kennedy and Hurwitz have been working closely with historical societies, researchers, museums, and the Florida Public Archaeology Network. The FPAN has taken an interest in the break-ins, and have dedicated resources to filing police reports, repairing what damage they can, and covering exposed coffins with tarps. 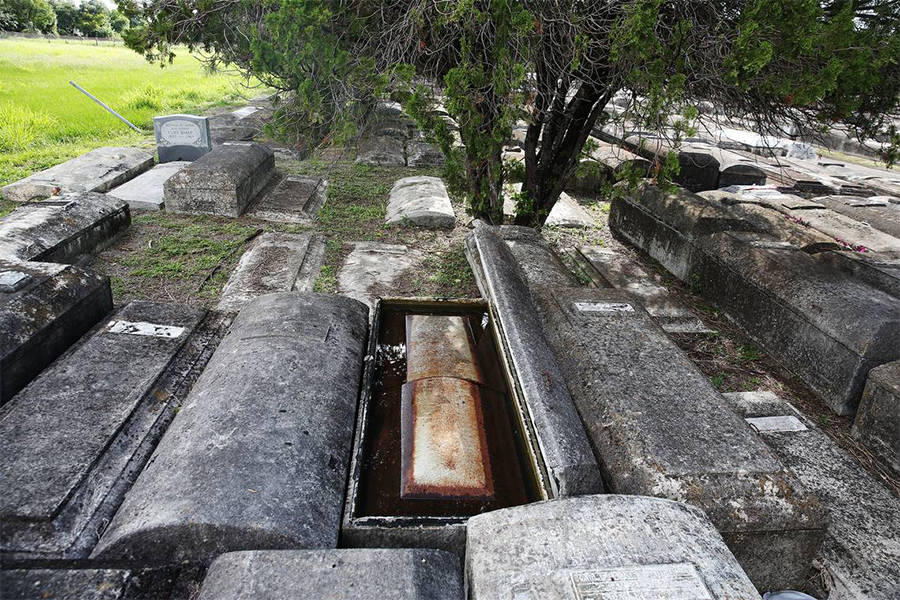 Miami Herald A wooden casket sits in several inches of rainwater after it’s concrete coffin was broken and left open.

“When you destroy cemeteries you destroy the past,” said Mallory Fenn, FPAN’s public archaeology coordinator. “We want to raise awareness so that people will value cemeteries as public museums.”

In addition to the FPAN, the Coral Gables Museum has taken an interest in the case. They plan on curating an exhibit on the cemeteries history, in an effort to raise awareness for those who are buried there and the history they carry.

The museum’s interest has also brought in residents of the Miami area who are willing to help in their own ways.

One museum director worked to change a policy that denied reserved plots to black residents unless they were paid off in full prior to death. A local architect donated his services to the cemeteries themselves, offering to design a new fence for the Lincoln Memorial Park and secure historical designation for the entrance archway.

In the meantime, Kennedy and Hurwitz are continuing the diligent monitoring of their respective cemeteries.

“I feel a spiritual connection to the people buried in these plots. Every single one has a story,” Kennedy said of Lincoln. “A hundred years from now we’ll all be dead, but this cemetery needs to be here so we’re not forgotten.”