Justice! Those Boating Bros Who Dragged A Shark To Death Have Been Arrested

The outrage from the video prompted an investigation by Florida's fish and wildlife commission, leading to the charges against the men. 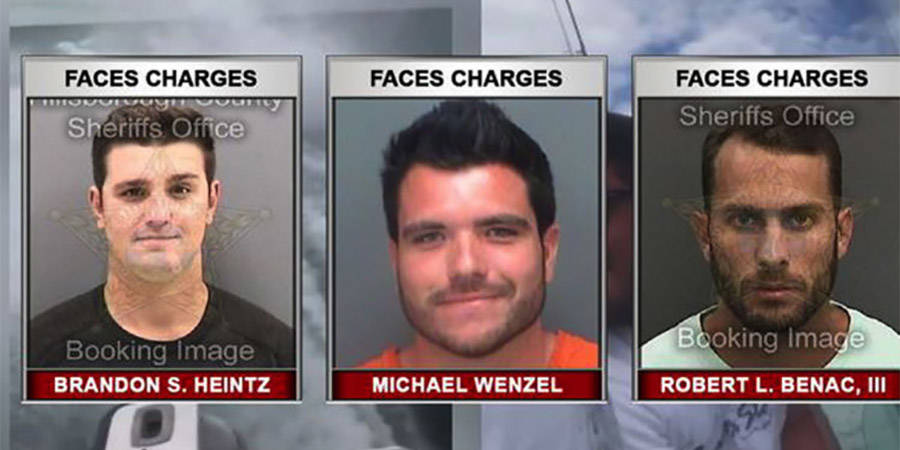 Earlier this year, a video surfaced of a struggling shark being towed behind a boat at high speeds. In the video, three men can be seen smiling and laughing as the shark bounces through the waves.

According to CNN, those three men, recently identified as Michael Wenzel, Robert Lee Benac, and Spencer Heintz, are each being charged with two felony counts of aggravated animal cruelty. In addition, Wenzel and Benac are being charged with an illegal method of take, a misdemeanor crime.

The emergence of the video, back in July, caused massive controversy, especially among animal rights groups and local fishermen. One fisherman named Mark Quarantino, so well known for shark fishing that his nickname is “Mark the Shark,” posted the video on his own social media, condemning the three men.

“I was horrified,” Quartiano told CNN. “I’ve been shark fishing for 50 years, and I’ve never seen a disrespect for an animal my entire career that was that evil.”

In the video, the men are seen pointing and laughing at the shark, which they shot before tying it to the back of the boat. The shark is seen visibly struggling as it bounces through the boat’s wake, at one point prompting one of the men to comment that the shark looked “almost dead.”

The shark ended up dying from its ordeal.

As for the charges, Florida law officials feel they are more than fair.

Klepper added that a third-degree animal cruelty charge carries with it a sentence of up to five years in prison and could include a fine of up to $10,000.

Though the original video did not show the men shooting the shark, officials uncovered evidence of the shooting in another video, resulting in the misdemeanor charges against Wenzel and Benac.

Next, take a look at the original video posted by the men. Then, check out this up close and personal look at a great white shark.