Frozen Meteor Turns Out To Be Frozen Feces From Passing Airplane

The "meteorite" was actually something scientists call "blue ice," a frozen mixture of feces, urine, and disinfectant that falls accidentally from passing aircraft. 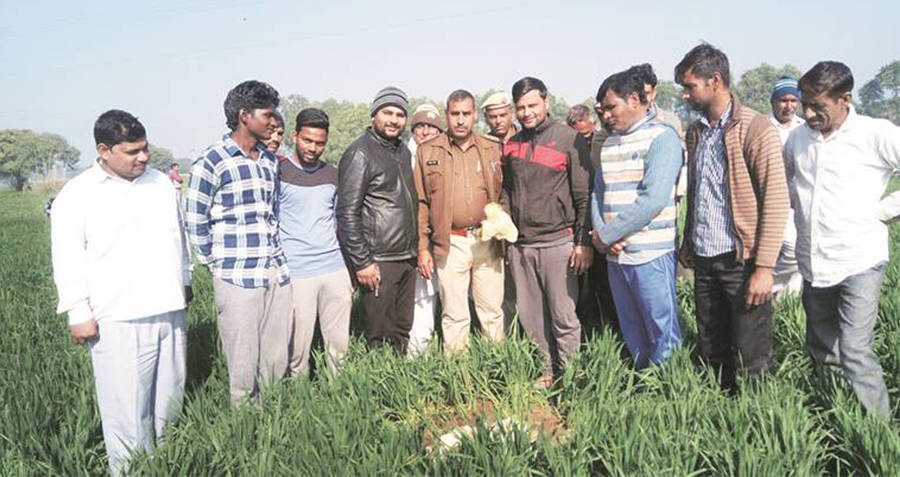 The Indian ExpressThe villagers who found the fallen object.

Residents in a small Indian village got quite the surprise over the weekend when the pieces of a fallen meteor they had collected turned out to be nothing more than frozen feces.

On Saturday, a yellow-brown, 20-pound object fell from the sky into the village of Fazilpur Badli, near Gurgaon, India. The object’s impact created a one-foot-deep hole in the field where it fell, drawing a host of villagers to the scene.

“I rushed to the spot and saw the object. It seemed to weigh at least 8 or 10 kilograms, judging by the dent it had made on the ground,” said resident Govind Singh. “Initially, we thought it could be ice but it was not melting. So, we figured it must have some kind of chemical in it.”

Assuming that the object was a piece of a passing meteorite that fell from space, the villagers quickly collected the pieces. Pieces of meteor can be extremely valuable, so the villagers took steps to ensure their preservation – most of them putting the pieces in their refrigerators.

Inspector Karan Singh of the local police department was called to the scene and alerted the National Disaster Management Authority. Additionally, he called in a team of scientists from the India Meteorological Department to collect samples.

To the shock of the villagers, the team’s verdict was not what they hoped for. Rather than pieces of valuable space rock, the rocks that were sitting in their refrigerators were actually pieces of frozen excrement that fell from a passing plane.

“It was not meteor of course because the meteor is a solid object and cannot melt. The object we found there was as transparent as ice and it could be ice or human excreta. After a chemical analysis of the object, we can be sure of what it was,” said SP Bhan, senior IMD official who collected samples from the spot.

Of course, the villagers who had kept pieces of the feces had to clean out their homes and refrigerators upon realizing what it was and will be more wary of what they bring into their homes in the future.

According to Slate, instances like this do occur occasionally, though not intentionally. All airplanes operate on a “closed waste system” that works like a common household toilet and flushes waste into an onboard sewage tank. A flight crew then empties the tank upon landing.

The tank cannot be emptied while in flight, nor does anyone onboard have the ability to empty it from inside the plane, as the only valve is on the outside of the plane. But if a hole appears anywhere along the system, or if the valve isn’t closed tight enough, or if a tube develops a leak, waste can seep out.

This waste, which experts call “blue ice” usually gathers on the outside of a plane. However, it has been known to break off. It’s typically small enough that it melts and evaporates before reaching the ground but occasionally falls in clumps to the earth.

Next, check out the 143-ton ball of poop, fat and wet wipes that clogged a London sewer for months. Then, read about Kopi Luwak, the world’s most expensive coffee that comes from animal poop.