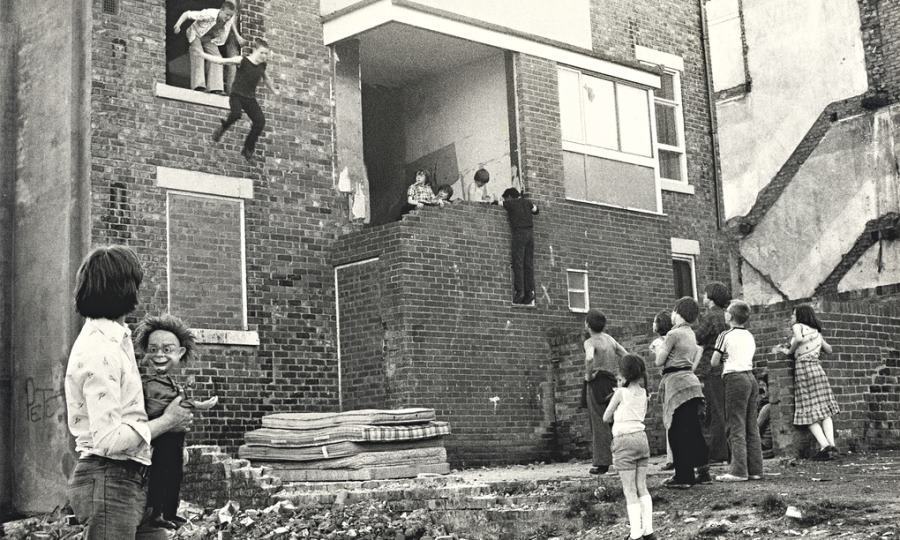 Glenn Murtha tells the story of this photo in an interview with The Guardian, extracted below for your reading pleasure:

he derelict houses in our neighbourhood were our playground. We’d jump from the second-floor window on to a pile of mattresses. Sometimes we’d get a bit hurt, but we didn’t have any fear in those days. Mrs Thatcher had just come to power and it was a time of austerity. My dad had his own scrap business, so he got a bit of trouble from the council for having vans and scrap in the yard, but he made a living from it, so they left him alone.

We didn’t just use the houses for fun. When a house was demolished, we’d climb in and take scrap and bits of antique doors and frames, and sell them in the scrapyard or keep them. We’d also find timber to make fires. Our family is Irish Catholic. I was 17, the second youngest of 10 children – the lad behind me in the window is my youngest brother – and every room in our house had a fireplace, so we needed a lot of timber.

The boy with the ventriloquist’s dummy is also my brother, and the lad climbing the wall is Tommy. I used to go drinking with him, but he hanged himself a couple of years after this photo was taken.

My sister Tish took this photo when she was 26. She also took a lot of others, and her work is still famous, particularly in the north-east. I’ve seen her pictures in school textbooks, illustrating stories about racism in Britain. She did a lot of projects like photographing juvenile jazz bands, Soho by night; this picture is for her series on youth unemployment. She never told us to pose; she’d just come along and capture a moment. She was nine years older than me. I would stand in the darkroom that she made up in the cupboard and watch her get the paper into the liquid, and all of a sudden a photograph would appear. I thought that was amazing. She died a couple of years ago of an aneurysm, aged 57, God rest her soul. I still can’t believe she died like that.

Tish had the interest in photography – she was the lucky one. The boys didn’t get that chance, because we all went straight out working. I was put on a government scheme that we called “ET” – because we’d earn an Extra Tenner a week – in Northumberland, in a lead mine in Allenheads. I had to travel 50 miles a day to get there and back. One morning, they asked me to have a go at the cement mixer. I put the handle in to wind it up, turned it round and it whacked me in the leg, damaging my ligament. I had to sit there all day and wait for everyone to finish work. It wasn’t until 4.30pm that they took me to hospital, 50 miles away.

It was a hard time, but we always had an adventure. I went to London to work on building sites because there was no work in Newcastle, but I’m back now, living in a flat on the seventh floor. I never got married – I’m still single and I prefer to be that way these days. I’ve had good fortunes and bad; I’m not working at the moment, because I’ve got a blockage in my leg from diabetes, and worn-down vertebrae from all my work digging the roads when I was younger. I’m going on 54, and I’d still love to jump out of a window on to some mattresses. I couldn’t now, unless I had a parachute.”