Is there any industry that Game Of Thrones hasn't cracked into yet? 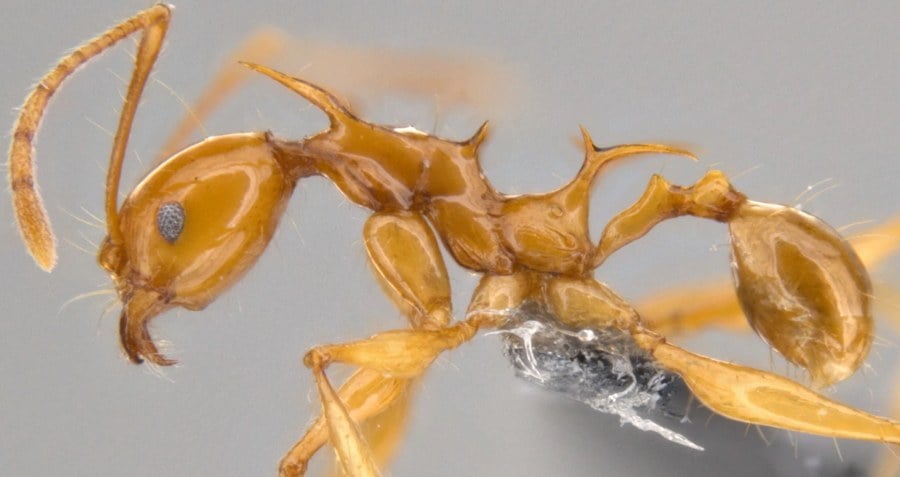 Okinawa Institute of Science and TechnologyPheidole viserion, one of two newly discovered ant species named for their resemblance to dragons featured on Game of Thrones.

If you recognize the scientific names of two new ant species discovered in the South Pacific — Pheidole drogon and Pheidole viserion — it’s because they are indeed named for the Game of Thrones dragons they so resemble.

Were you to read the discovery paper recently published in PLOS ONE, you’d be inundated with disorienting facts and figures until you reached the bottom, where you’d find two blurbs unlike anything you’d usually find in a science journal:

[Pheidole viserion] Etymology: The species name refers to Viserion, the cream and gold colored dragon of Daenerys Targaryen, a fictional character from the George R. R. Martin’s novel A Song of Ice and Fire.

[Pheidole drogon] Etymology: The species name refers to Drogon, the black-colored dragon of Daenerys Targaryen, a fictional character from the George R. R. Martin’s novel A Song of Ice and Fire.

When research team member Evan Economo noticed the ants’ coloring, as well as their spines resembling both wings and claws, he knew there was only one way to name these new creatures.

But these ants’ unique spines suggest more than their zeitgeist-catching names. While the working theory had long been that ant spines were used for defense, the new research suggests that these ants’ spines are used for something different altogether.

The researchers correctly hypothesized that the spines evolved differently in two different castes of these ants: major workers (who do most of the colony’s work) and minor workers (who do less). Major workers’ spines evolved in a certain way so as to support a greater musculature capable of supporting their abnormally large heads, which are used to break up large food sources to be spread among the colony.

As researcher Eli Sarnat told The Christian Science Monitor, discoveries like this “just [go] to show that the reality, the world that we’re living in is infinitely more interesting than any science fiction story or any ‘Game of Thrones’ character.”

Nevertheless, scientists have recently been taking quite an interest in Game of Thrones. These new ants are hardly the first creatures to be named for characters from the HBO series and its source novels. Last year, for example, scientists named a sea slug after Khaleesi, the keeper of the dragons.

Who knows what kinds of Game of Thrones-esque creatures will be unearthed next.