Russia comes under fire from foreign governments and global media for its pervasive homophobia. 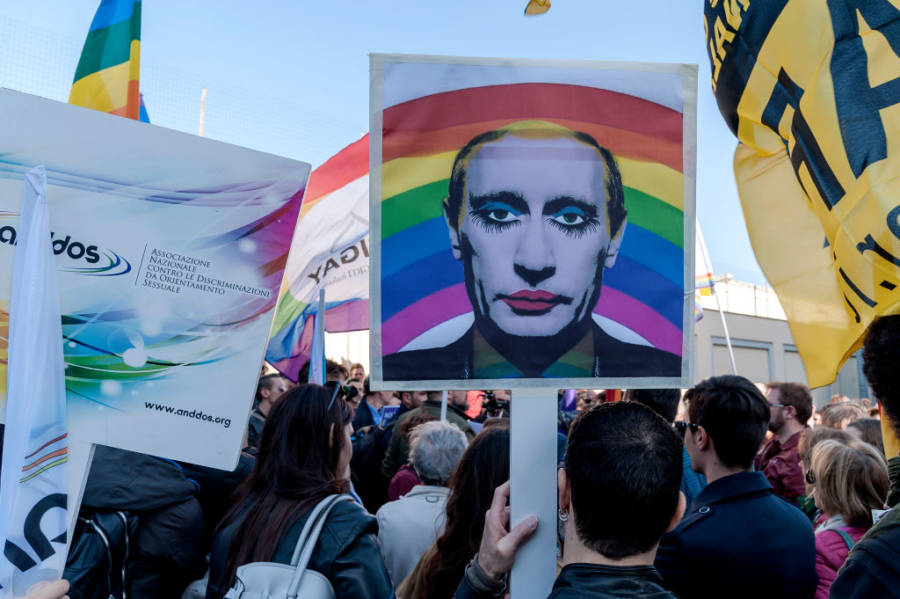 Stefano Montesi/Corbis via Getty ImagesProtesters hold a “gay clown” poster of Russian President Vladimir Putin after the news from Chechnya, where testimonies from survivors recount the existence of concentration camps for homosexuals, victims of abuse, torture, and persecution.

Global concerns for the gay populations in Russia and Chechnya (a republic of Russia) have been on the rise in recent weeks after reports that more than 100 gay men had been arrested and tortured.

Though Russia officially recognized that homosexuality is not a mental disorder in 1999, the country still has a bad reputation for widespread homophobia — at both the civil and the official level.

Due to this stigma, many Russians believe that homosexuality can be cured with methods including hypnosis and holy water, reports the BBC.

Psychotherapist Yan Goland, for example, claims he has “cured” 78 LGBTQ people using a hypnosis treatment that can last from eight to 18 months (trans people take a bit longer, he says).

“When a patient comes to me, I show them similar cases: how they were and how they are now,” the 80-year-old therapist told the BBC. “The patient is filled with hope that we can help, and understands they need to be treated.”

Of course, scientists around the world (including in Russia) have concluded that homosexuality is a trait that neither can — nor should — be treated.

“There are several different orientations and homosexuality is one of the normal variants,” Russian psychologist Pavel Sobolevsky, who warned that any attempts at treatment can have harmful longterm effects, said.

First, “extinguish” same-sex attraction with an eight-hour process that is meant to influence the patient’s dreams. Second, encourage patients to sexually objectify people of the opposite sex around them. Third, have sex with someone of the opposite sex.

“The result was, without a doubt, negative if not damaging,” one patient said of the experience. “It was catastrophic, if I’m honest.”

Other treatments offered in the country include a two-month audio hypnosis course for $88 and religious treatment.

One woman was taken to church when she was 13 where she was told her attraction to other women came from the devil. “They covered me in holy water and forced me to drink it,” she said. “Sometimes they hit me with rods. I feel like they broke my mind.”

Despite the ongoing prevalence of these sorts of destructive, pointless, and ineffective treatments, the gay community in Russia is becoming more emboldened with encouragement from globalized media and foreign governments.

After at least three of the gay men detained in Chechnya, Russian authorities arrested 20 gay rights activists in St. Petersburg for protesting their government’s inaction.

In a recent and uncharacteristic visit to Russia, German chancellor Angela Merkel expressed her concerns to Russian president Vladimir Putin over the arrests of activists.

“I also spoke about the very negative report about what is happening to homosexuals in Chechnya and asked Mr. President to exert his influence to ensure that minorities’ rights are protected,” Merkel told the media.

As for the Chechen president, Ramzan Kadyrov — he denies that there is any problem at all.

The reports of abuse and murder are “absolute lies and disinformation,” he said. “You cannot detain and persecute people who simply do not exist in the republic.”

Next, learn these shocking facts about the history of gay conversion therapy. Then, allow this map to show you the dire and wildly varied state of gay rights around the world.