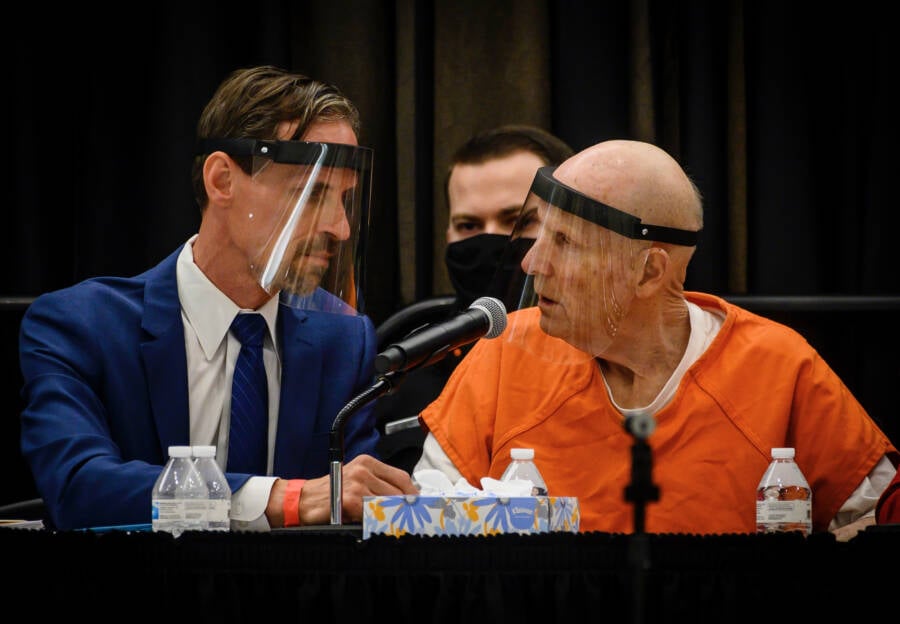 After decades of fruitless searching, the Golden State Killer who terrorized California in the 1970s and ’80s was finally caught in 2018. The perpetrator, former cop Joseph James DeAngelo, pleaded guilty to 13 counts of first-degree murder on June 29, 2020 and received 11 consecutive life sentences (plus an additional life sentence and a further eight years) on August 21, bringing the Golden State Killer trial to an end.

Though DeAngelo also raped some 50 women, state statutes of limitations on those crimes have allowed him to avoid charges. Nevertheless, the 74-year-old DeAngelo will never again see the light of day.

The Conclusion Of The Golden State Killer Trial

Though his trial was initially slotted for May, Sacramento County Deputy District Attorney Amy Holliday said, “it had to be postponed because of court closures and the dangers of bringing elderly or high-risk individuals into the courtroom,” referring to the COVID-19 pandemic.

“Many of the victims, witnesses and law enforcement are in their 80s and 90s,” she added. “Many of these people all deeply affected by these crimes may not be with us at the time of jury trial.”

But, in June, DeAngelo finally faced trial, a seemingly more frail man than when he was first caught in 2018. Covered in an orange jumpsuit and a plastic face shield to ward off COVID-19, DeAngelo was no longer the spry man who vaulted fences and snuck into women’s homes.

During the June proceedings, DeAngelo finally admitted to his crimes in a plea deal that allowed him to avoid the death penalty for the 13 first-degree murders in question. Holliday announced DeAngelo’s plea agreement in front of survivors and the families of his victims.

The agreement also saw DeAngelo admit to numerous rapes that he couldn’t be charged for. Many of these assaults weren’t able to be prosecuted due to statute of limitations issues. All told, DeAngelo admitted to hurting 87 victims across 57 incidents in 11 different California counties.

Victims address the court during the Golden State Killer trial on August 18, 2020.

In August, victims and their families made statements before the Golden State Killer’s sentencing, recounting DeAngelo’s crimes in graphic detail. One woman, who was just seven years old when DeAngelo attacked her mother in their home, recalled, “He threatened to cut my ear off and bring it to her.”

The women who survived DeAngelo’s horrifying attacks characterized him in their testimony as “subhuman” and monstrous. Victims recalled numbness in their hands lasting for months after their attacks from how tightly DeAngelo bound them and shared that the trauma of their experiences had never left them.

One woman whose sister was killed by DeAngelo simply said, “May he rot in hell.”

Carol Daly, one of the original detectives who worked on his case, read a statement on behalf of victim Cathy Rogers, saying, “The nightmare has ended. He is the one forever alone in the dark.”

The Long Road To Justice For Joseph James DeAngelo 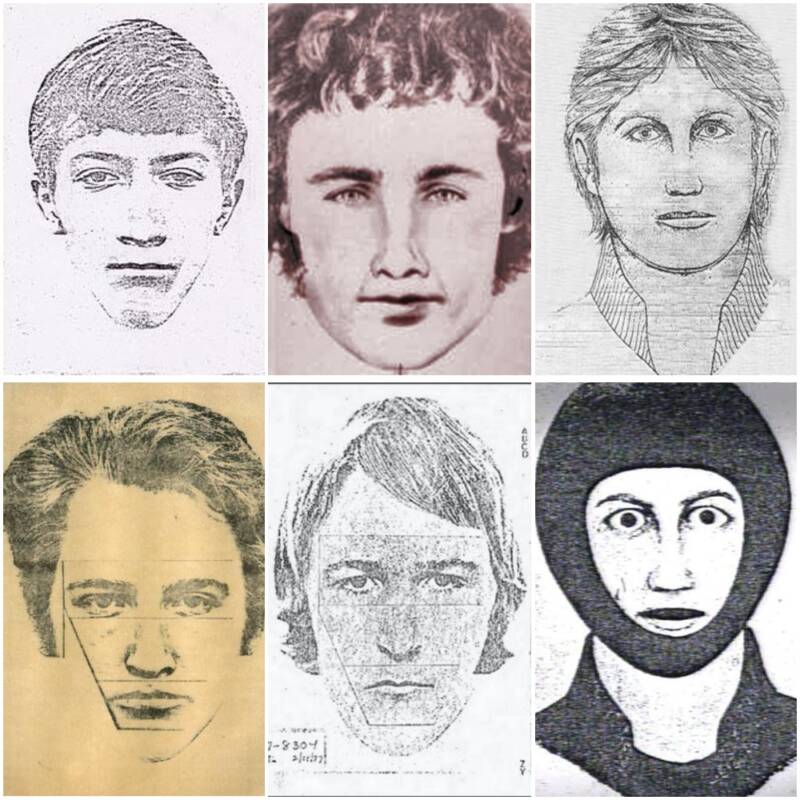 Wikimedia CommonsSketches of the East Area Rapist and the Original Night Stalker, based on statements from survivors.

For victims and their families who have waited decades for justice, the relief during DeAngelo’s admissions and then his sentencing was palpable. Some had been waiting for justice for more than 40 years.

Starting in the 1970s, DeAngelo had committed his gruesome crimes as he pleased — from California’s southern coast and the Central Valley to the Bay Area and neighborhoods of Sacramento and he was known by different names in different areas. The East Area Rapist, Original Night Stalker, and Visalia Ransacker, for example, were all him.

All told, he killed at least 13 people and raped about 50 over the course of at least two decades. All the while, he eluded police again and again. 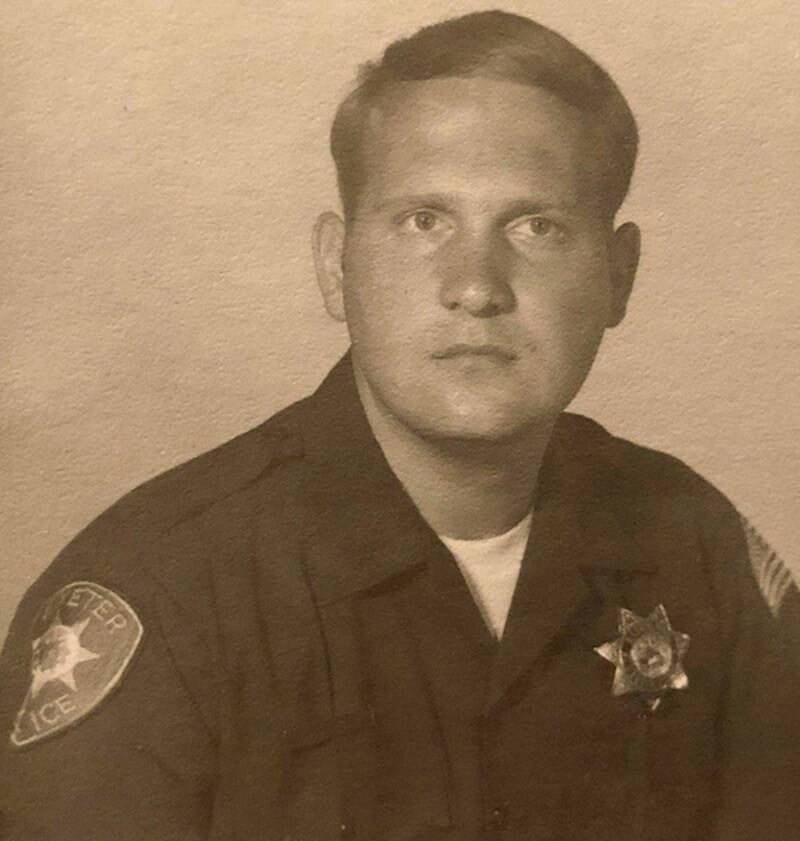 Santa Barbara County Sheriff’s OfficeJoseph James DeAngelo during his days as a cop in the 1970s.

“The fear in the community was like something I had never seen before,” said Carol Daly, former Sacramento sheriff’s detective. “People were afraid wherever they went.”

By the 1990s, it seemed as though he’d vanished — though he taunted one of his victims in 2001 by giving her a phone call to ask if she remembered, “when we played.” That same year, DNA evidence linked the East Area Rapist and Original Night Stalker cases to one singular perpetrator.

Around this time, the late true crime author Michelle McNamara took it upon herself to piece the decades-long puzzle together. Her efforts reinvigorated the efforts of cold-case investigator Paul Holes to find the man. As chronicled in HBO’s documentary series I’ll Be Gone In the DarkI’ll Be Gone In the Dark.”]https://youtu.be/DTNHJETw0S8[/embed]

Instead of knocking on DeAngelo’s door and making an arrest, Holes surreptitiously retrieved some of his DNA from a car door handle and discarded tissue to confirm he was their man. Holes was mere weeks from retirement when he made the career-making bust and get the perpetrator in handcuffs after decades.

While many of the victims and their families are grateful justice has finally been served following the Golden State Killer trial, some are frustrated that California Governor Gavin Newson’s moratorium on the death penalty has allowed DeAngelo to keep his life. Others, meanwhile, have mixed feelings about the privacy issues surrounding his capture.

“The resolution of the Golden State Killer case should be lauded for bringing closure to these investigations, but the means by which DeAngelo was identified remains troubling,” said Elizabeth Joh, law professor at the University of California, Davis.

District Attorney Anne Marie Schubert of Sacramento County, meanwhile, always encouraged the use of DNA evidence without the same concerns about how surreptitiously it was obtained.

Meanwhile, prosecutors are still unsure as to why the man Schubert called the “real-life version of Hannibal Lecter” suddenly stopped committing crimes in the first place. The killer ceased killing when he was in his 40s as DeAngelo worked at a Save Mart grocery store and lived a traditional suburban life in Sacramento.

The fact that he walked among regular citizens, even victims such as Gay Hardwick — who was raped in 1978 as her husband Bob was helplessly tied up — is deeply unsettling. However, Hardwick now says she finally feels a sense of peace.

“I already feel relieved,” she said. “He’s going away and never coming out and there won’t be any appeals. He will die in prison.”

After learning about Joseph James DeAngelo and the Golden State Killer trial, read about Sharon Huddle, DeAngelo’s ex-wife. Then, learn about Charles Ng — the serial killer brought down by his own shoplifting addiction.