Goldfish Can Turn Their Own Bodily Fluids Into Alcohol, Scientists Discover

New research shows that goldfish and other related species can convert lactic acid into alcohol. 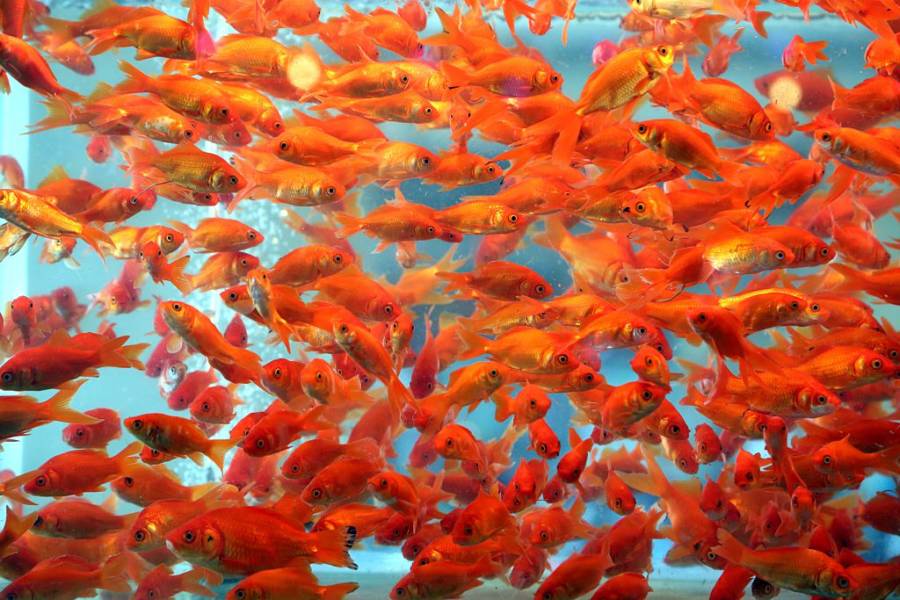 Turns out, some fish deal with depressing and cold winters in the same way that humans do: alcohol!

They developed this ability in response to the ice, which covers ponds in the winter and blocks oxygen from reaching the creatures underneath. Since fish need oxygen too, this is a bit of an issue for them.

Typically, the lack of oxygen in the water would cause a buildup of lactic acid, which would kill the fish in minutes. But with this cool molecular mechanism, the little guys can turn that acid into alcohol, which they then let out through their gills.

The longer they’re trapped under the ice, the report shows, the higher their blood alcohol levels rise.

“If you measure them in the field the blood alcohol goes up above 50mg per 100 millilitres, which is the drink-drive limit in Scotland and northern European countries,” Dr. Michael Berenbrink, an author of the study, told the BBC. “So they are really ‘under the influence’.”

Rather than getting them a drinking ticket, though, this drunkenness means that carp are the only fish species able to use this harsh environment to their advantage.

These survival capabilities also help explain why that fish you got at the state fair when you were six managed to live for a decade, despite your terrible pet-parenting skills.

“The ethanol production allows the crucian carp to be the only fish species surviving and exploiting these harsh environments, thereby avoiding competition and escaping predation by other fish species with which they normally interact in better oxygenated waters,” Dr. Cathrine Elisabeth Fagernes, the report’s lead author, said. “It’s no wonder then that the crucian carp’s cousin, the goldfish, is arguably one of the most resilient pets under human care.”

Goldfish aren’t the only underwater species that seem to benefit from a bit of booziness.

A 2014 study found that when zebrafish were put in an alcoholic solution, they became more confident leaders — swimming faster and showing less fear or hesitation. (Though the fish who were exposed to ethanol solutions of even higher levels became groggy and slow.)

Though this research can teach humans valuable lessons about evolutionary adaptations, the newly-discovered fish talent won’t help us turn any water into wine.

“If you put them in a beer glass and closed them off, it would take 200 days to get it up to 4%,” Berenbrink said.

So, basically, if you decide to make a cocktail out of your pet goldfish, it will take almost a year and still be a pretty weak drink.

Next, read about this tiny fanged fish that injects its predators with opiates. Then, check out these 35 mesmerizing jellyfish facts.