It's just the latest example of religiously-motivated unusual behavior involving airports and planes. 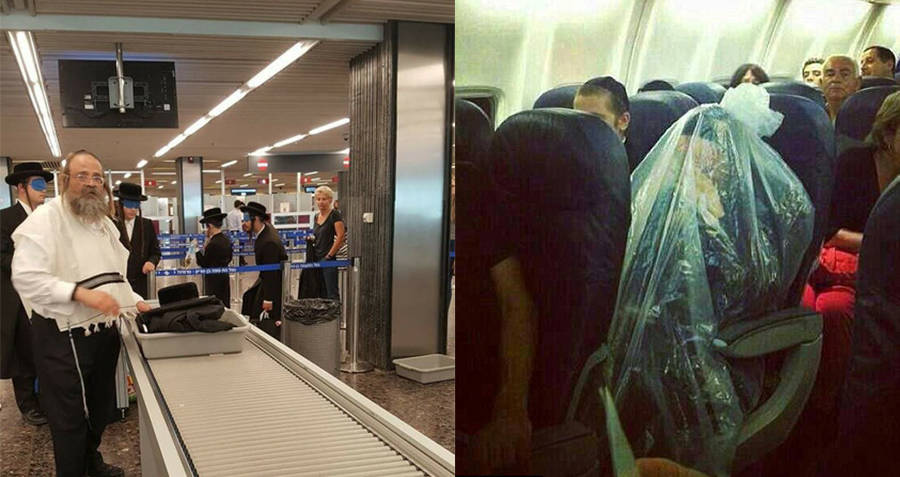 Left: thenewyorkgod/ Reddit
Right: Left: Hasidic travelers wear blindfolds at an airport
Right: A Kohein man covers himself in plastic on a flight

A group of young Hasidic Jewish men was seen traveling through an airport blindfolded, apparently so they would not be exposed to the potential sight of ‘immodestly’ dressed women.

Reddit user ‘thenewyorkgod’ posted the image Monday morning, which has since amassed over 5000 comments. Most of the commenters expressed shock over such conduct, but some of the users have been posting their own similar experiences or pointing out how common these occurrences are.

In 2013, an Orthodox Jewish man completely covered himself in plastic sheeting during a flight to avoid being exposed to the dead should the plane fly over a cemetery.

This man was believed to be a Kohein, who are religious descendants of the priests of ancient Israel. Kohanim are banned from having any sort of contact with the dead in order to remain pure. This includes visiting cemeteries or even flying over them.

To try to save themselves, Kohanim employ a controversial solution that is not entirely allowed in the church — wrapping themselves in plastic bags. The bag is said to create a sort of barrier between the individual and the ‘tumah,’ or surrounding impurities.

The controversy exists mostly due to safety concerns. Even if they can be seatbelted in, the passenger wouldn’t be able to reach an oxygen mask or escape from the plane quickly if an emergency situation were to occur.

In addition, the question remains as to how they can breathe, as air holes are not allowed in the bag because they would invalidate the barrier.

In 2015, another controversy arose when a Hasidic man refused to sit next to a woman on a plane because she was a woman not related to him.

Laura Heywood was flying from San Diego to London in the middle seat while her husband sat in the aisle side. The window seat originally belonged to a man who happened to be a Hasidic Jew.

The man refused the seat as his faith prevented him from sitting next to any woman who wasn’t his wife. He asked the couple to switch places, but Heywood, believing the man’s request to be sexist, refused.

The flight ended up being delayed due to the disagreement.

Even fellow members of the Jewish faith find instances like these to be confusing.

Jeremy Newberger, a passenger who witnessed a similar episode on a New York to Israel flight, expressed his concern over the issue.

“I grew up Conservative, and I’m sympathetic to Orthodox Jews,” he said to the New York Times. “But this Hasid came on, looking very uncomfortable, and wouldn’t even talk to the woman, and there was five to eight minutes of ‘What’s going to happen?’ before the woman acquiesced and said, ‘I’ll move.’ It felt like he was being a yutz.”

Next, read about how three doctors saved jewish lives by faking a disease. Then read about the Noah’s Ark amusement park.