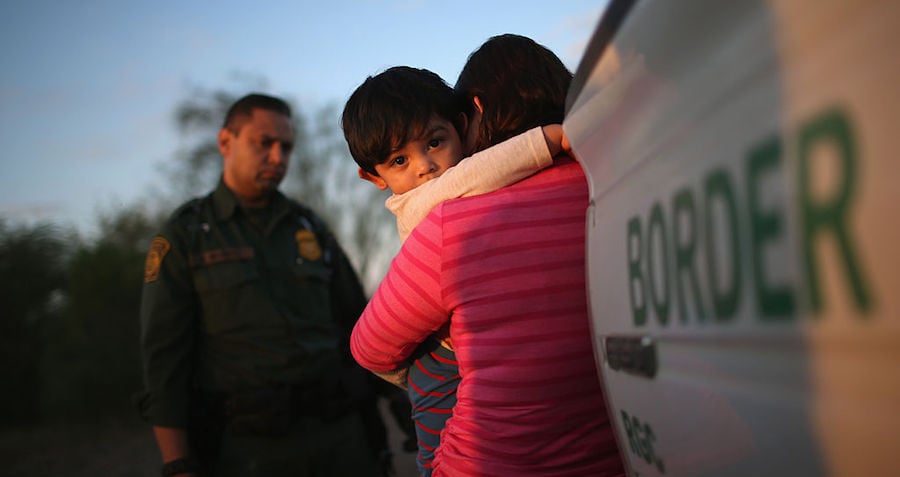 John Moore/Getty ImagesA one-year-old from El Salvador clings to his mother after she turned themselves in to Border Patrol agents near Rio Grande City, Texas. They had just illegally crossed the U.S.-Mexico border into Texas. The mother said she brought her son on the 24-day journey from El Salvador to escape violence in the Central American country.

The Department of Homeland Security (DHS) sent out a series of memos on Tuesday that executes President Donald Trump’s campaign promises to ramp up anti-immigration efforts.

The memos order Customs and Border Protection (CBP) and Immigration and Customs Enforcement (ICE) agents to capture and immediately deport any undocumented immigrants that they may come across nationwide.

The memos also instruct officers to keep all immigrants detained in jail until a judge hears their cases — a break from traditional policy — and beef up the power that local police have to aid in these efforts.

Furthermore, these memos instruct the agencies to hire roughly 10,000 more immigration agents and direct them to start planning the construction of the border wall.

Dan Stein, president of the Federation for American Immigration Reform, an organization that calls for lower levels of immigration across the board, told USA Today that the memos embody the agenda for which his group has been lobbying for years.

“It’s Christmas in February,” Stein said. “What [Homeland Security Secretary John] Kelly has done is lay out a broad road map of regaining control of a process that’s spun out of control.”

However, organizations that advocate for immigrants were not as happy about what the new memos entail.

“These memos lay out a detailed blueprint for the mass deportation of 11 million undocumented immigrants in America,” Lynn Tramonte, deputy director of America’s Voice Educational Fund, an immigration advocacy group, told USA Today. “They fulfill the wish lists of the white nationalist and anti-immigrant movements and bring to life the worst of Donald Trump’s campaign rhetoric.”

For example, an expansion of the expedited removal policy now means that agents will be able to immediately deport any undocumented immigrant that has been in the country for less than two years. Under the Obama administration, on the other hand, the policy limited immediate deportations to any undocumented immigrant found within 100 miles of the border and in the country for less than two weeks.

Next, read up on the recent White House leak that exposed a plan to deploy 100,000 soldiers in deportation raids, before finding out how Trump’s border wall will cause major environmental damage.