"The voters think a joke is better than what we have now." 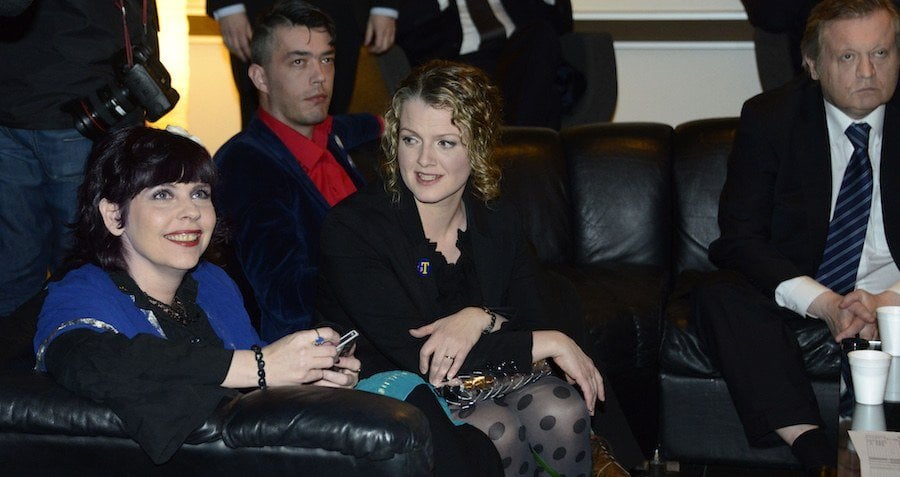 HALLDOR KOLBEINS/AFP/Getty ImagesBirgita Jónsdóttir, founder and leader of the Pirate Party (left) on election night in Reykjavík, Iceland on April 28, 2013.

Polls show that the Pirate Party is about to win big in the national elections of Iceland this Saturday.

The party advocates for internet freedom and direct democracy in which citizens determine policy via internet polling.

“People want real changes and they understand that we have to change the systems, we have to modernize how we make laws,” said Birgitta Jónsdóttir, the party’s founder. Jónsdóttir is a former WikiLeaks activist, and current poet/web programmer, reports The Washington Post.

The biggest election issue for Iceland this year seems to be the terms and conditions of the country’s entrance into the European Union, which the Pirate Party has not officially taken a position on. The party has, however, voted that the issue must be put to a national referendum.

Another issue fueling tensions this election season is the Panama Papers leak from earlier this year. The incident caused outrage in Iceland, when documents showed that the prime minister’s wife owned a stake in Iceland’s collapsed banks through an offshore company.

This was particularly egregious considering how the country was saved from certain financial ruin only through a $4.6 billion, internationally-funded bailout. The prime minister embroiled in the scandal has since resigned, and now new elections will be held.

“The distrust that had long been germinating has now exploded. The Pirates are riding on that wave,” said Ragnheithur Kristjánsdóttir, a political history professor at the University of Iceland. “We’ve had new parties before, and then they’ve faded. What’s surprising is that they’re maintaining their momentum.”

Indeed, the national outrage fueling the Pirate Party’s rise has reached a fever pitch. Consider that the country of Iceland has less than half the population of Washington, D.C. If the same proportion of people that have taken to protesting in Iceland were to protest in the United States, there would have been over 21 million people out in the streets.

“The voters think a joke is better than what we have now,” said Benedikt Jóhannesson, the leader of Iceland’s other insurgent party, expected to soon form a coalition government with the Pirate Party. “Some of our parties have been around for 100 years. But the systems that worked in, say, the 1960s don’t necessarily work for the 2010s.”

Next, learn about the four times Iceland made major decisions based on elves, before checking out Iceland’s most bizarre church.