India has been overrun with 50 million monkeys, some of which have broken into people's homes, terrorized and stole from people on the streets, and even caused some people to die.

In 2014, India’s New Delhi Municipal Corporation decided to tackle the massive monkey issue they have in the city by hiring men dressed as langurs to scare the smaller monkeys away.

Most of the monkeys that populate India’s capital city are rhesus macaque monkeys, and by dressing up a few dozen professional impersonators as much larger gray langur monkeys, the city is able to keep the monkeys away from the Parliament House of India and its employees.

Who says Modi has failed in job creation? https://t.co/yKTKKFcr0n via @indiatoday

Although it may sound absurd to hire grown men to dress as larger monkeys just to scare smaller monkeys away, the monkey population problem in India is actually quite serious. The country’s government has even gone so far as to refer to the issue they have with monkeys as an emergency situation.

There are currently about 50 million monkeys in India, and New Delhi has been particularly plagued by them. These monkeys break into people’s homes, terrorize and steal from people on the streets, and even in certain cases cause people to die.

In 2007, the deputy mayor of Delhi fell to his death after he was pushed off his balcony by monkeys. In 2012, a 14-year-old was seriously injured after falling from her balcony after being pushed by monkeys as well. 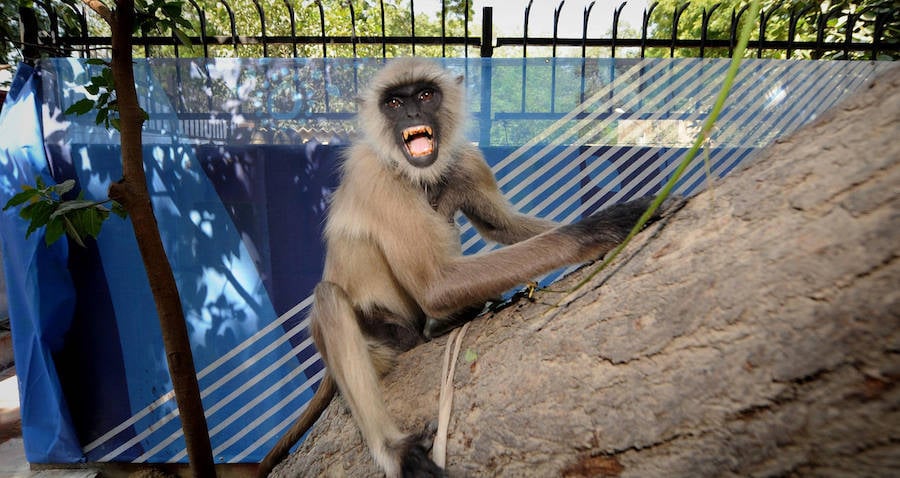 Anthony Devlin/PA Images via Getty ImagesA Langur is seen outside the National Stadium in New Delhi.

The problem is that monkeys are a protected animal in India and are also sacred because it’s believed that they have a connection with the demi-God Hanuman, who takes the form of a monkey. People thus pay tribute to Hanuman by feeding monkeys.

In 2007, an Indian High Court order even required monkeys in sanctuaries to be fed by humans as opposed to having the monkeys feed themselves by eating directly from plants.

India spends a lot of money feeding these monkeys too. The government reportedly spent $488,000 in 2013 feeding just the monkeys that live in the Asola Bhatti Wildlife Sanctuary, which housed 16,000 monkeys at the time. 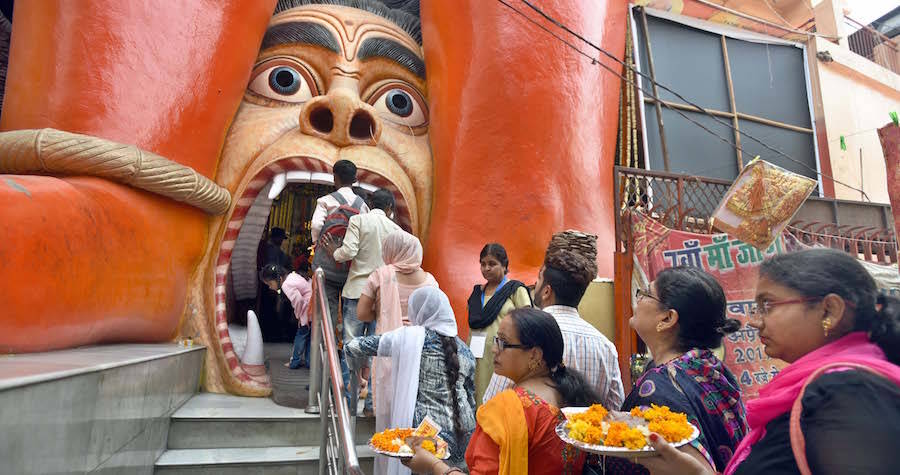 Sushil Kumar/Hindustan Times via Getty ImagesPeople visit temple to offer prayers on the occasion of Hanuman Jayanti at the Hanuman temple near Link Road in New Delhi.

The problem is that, although the government is spending so much money, the extent to which they’re feeding these monkeys still isn’t sufficient. As a result, the monkeys seek food elsewhere — including areas heavily populated by humans.

Between 2007 and 2012, the Indian government in New Delhi trapped 13,013 monkeys, according to R. B. S. Tyagi, director of veterinary services for Delhi’s principal city government. But that figure doesn’t even account for the tens of thousands of other monkeys roaming around the city that continue to disturb the peace.

Manohar Parrikar, India’s defense minister, hired two army personnel to defend him from the monkeys as he goes to work in New Delhi’s South Block, the political center of the city. And when former President Barack Obama visited the country, men were hired to swat the monkeys away with broomsticks and slingshots as he toured the city.

With India’s monkey problem this dire, it’s no surprise that the government eventually resorted to dressing men up in monkey costumes.

Next, discover some of the most interesting facts about India. Then, check out this story about the Central American monkeys that have officially entered the Stone Age.