"Please nominate this man for a Nobel Prize," said one Twitter user in response to Sgt. Stephen Wheeles pulling over a car that was driving too slowly in the passing lane. 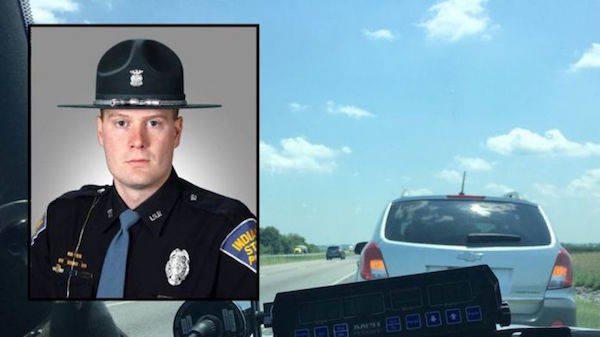 FOX 13 NewsIndiana trooper Stephen Wheeles and the picture he took of the car he pulled over.

On a highway in Indiana, about 20 cars were trailing behind a slow driver in the passing lane who wouldn’t change lanes. When Indiana State Trooper Sgt. Stephen Wheeles noticed the line of traffic, he decided to do something about it.

Wheeles, of the Versailles District in southeast Indiana, pulled over the woman driving the vehicle for violating the state’s “slowpoke” or “move over” law, reported Fox 59. The law took effect in 2005 and states that drivers traveling in the far left lane must move over if the car behind them is going faster.

After Wheeles tweeted a picture of the car with a reminder of the law on June 16 both the trooper and the tweet went viral.

I stopped this vehicle today for a left lane violation on I-65. The driver had approximately 20 cars slowed behind her because she would not move back to the right lane.

Again…if there are vehicles behind you, you must move to the right lane to allow them to pass. pic.twitter.com/tePjJ1Xigy

And many people, who have likely experienced a surge of road rage as a result of slow drivers, are applauding Wheeles and even calling him a hero.

“I was driving southbound on I-65 and I noticed that there was a line of traffic in the left lane going a little slow,” said Wheeles. “I gave her plenty of chances to move back over to the right lane and she just did not do it. I used it as an opportunity to educated her on what the law is.”

The driver was given just a warning, with Wheeles saying that he didn’t “think she was really clear on what the law in Indiana was as far as using the left lane.”

The Indiana State Police said they’ve written nearly 5,000 warnings and 331 tickets for the left lane law since it went into effect.

Meanwhile, Twitter users from all over the country have implored Wheeles to take a job in their own states, with the sergeant happy to field the offers.

To one Tennessee resident, Wheeles wrote back, “I love Tennessee but unfortunately, my enforcement powers stop at the Ohio River…Sorry!!”

One Twitter user suggested Wheeles be nominated for a Nobel Prize. And race car driver Graham Rahal wrote “This guy is my hero. Fast lane cruisers are one of my biggest frustrations!”

Wheeles also answered questions about the law. In response to a Twitter user who asked whether the law applied even if when going the speed limit, he said, “The spirit of the law is that since many people drive well above the speed limit, it creates an ‘accordion effect’ as traffic starts backing up behind the slower vehicle. This is where many of our crashes occur on the interstates. It’s all in the name of safety.

In general, Wheeles was just glad to receive so much prize, though it may have been a bit too much attention for the sergeant.

Wow…I am overwhelmed. You all are amazing!! Just trying to do my part to make the roadways safer for the traveling public. Blessings….but for tonight……#TwitterShutdown

Next read about the companies taking preorders for flying cars. Then read about the Arkansas driver who live-streamed himself ramming a Ten Commandments monument.