Straw Dinosaurs In A Rice Field? Only In Japan

In Niigata Prefecture, locals say goodbye to the rice harvest season in a pretty creative way at the Wara Art Festival. 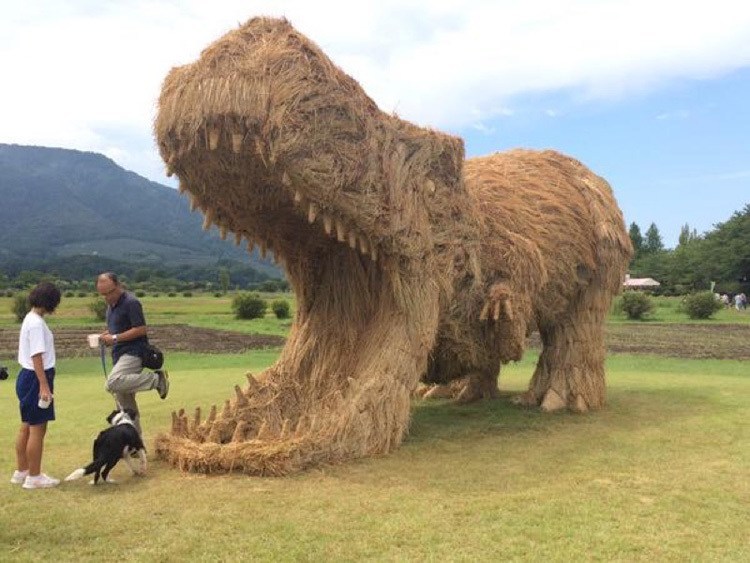 What a way to end a season. Each year on the last day of August, Japan’s Niigata Prefecture celebrates the end of the rice harvest in a rather elaborate (yet resourceful) fashion: creating rice straw sculptures.

Known as the Wara Art Festival, artists across the area transform the prefecture’s leftover wara (rice straw) into some truly stunning artwork, all available for public viewing.

Beyond pure artistic vision, each sculpture requires approximately one hundred bushels of straw, a team of workers and wooden frames, which serve as a “skeleton” for each sculpture.

All of the subsequent works are impressive in their own right, but one artist in particular stands out: Amy Goda. Since 2013, the local sculptor’s massive dinosaur creations have captured the Internet’s attention, bringing the Wara festival fans from all around the world.

Goda employs an array of techniques to create her straw statues, ranging from basket weaving to cottage thatching — even braiding. Whatever Goda’s process, her results are sturdy enough to allow festival goers to not just view her work, but fully interact with it. Festival patrons can pose on top of the giant effigies or stand underneath without fear of harm to themselves or Goda’s creations.

From time to time, sculptors create variations that can float on water, like the giant duck featured at this year’s event. Reaching heights of up to 16 feet, the at the Wara Art Festival are truly a sight to behold. If your allergies or thin wallet prevent you from viewing the straw sculptures yourself, we’ve got you covered: 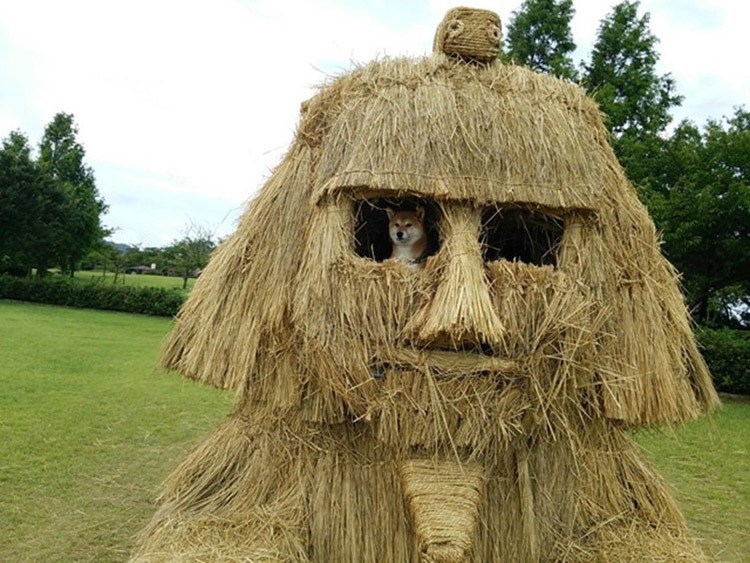 A shiba inu sits inside the eye of a male figure at the Wara Art Festival in Niigata Prefecture, Japan. Source: Koktel 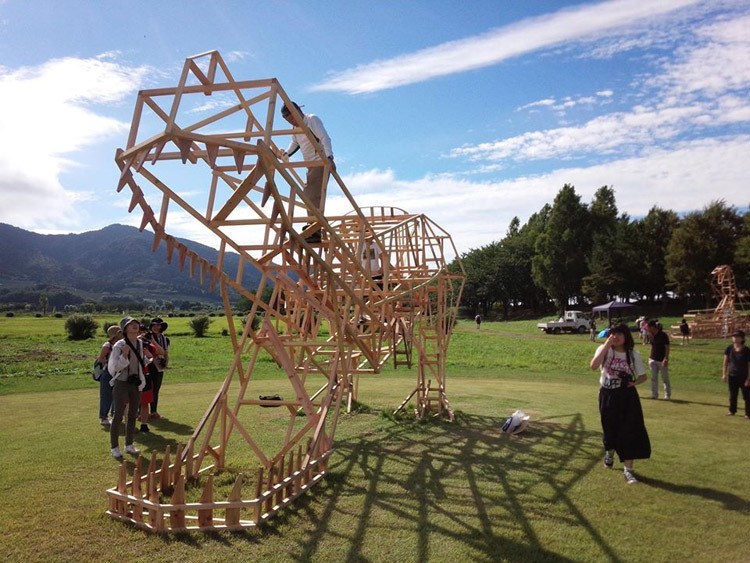 This image of the T-Rex frame gives perspective to just how large the beast’s open mouth really is. Source: waraartmatsuri 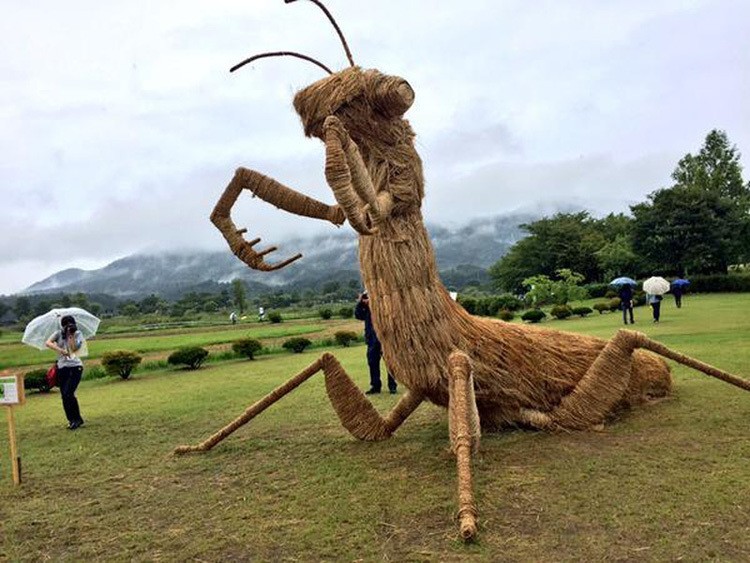 Insects like this praying mantis are also popular at the festival. Source: amymauscd 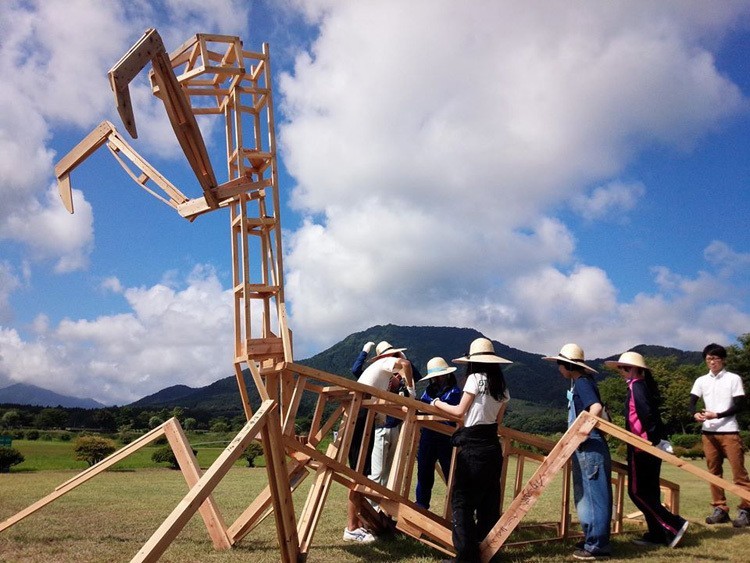 Volunteers work on the structural frame of the mantis. Source: waraartmatsuri 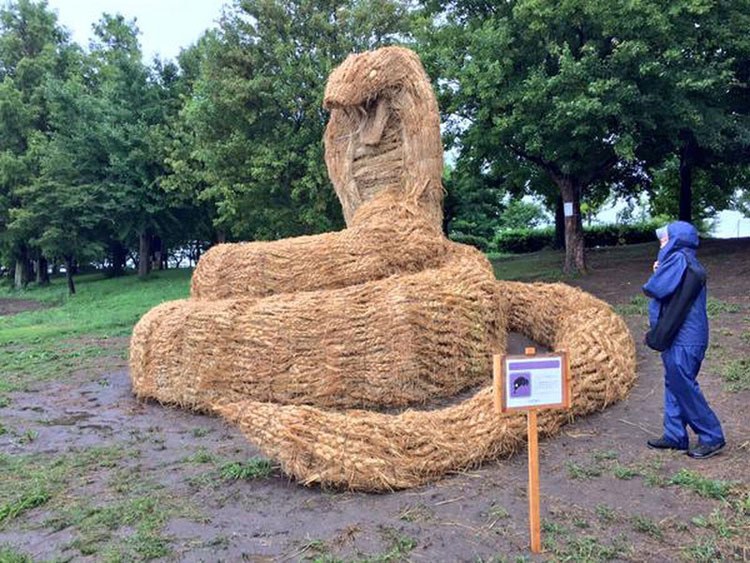 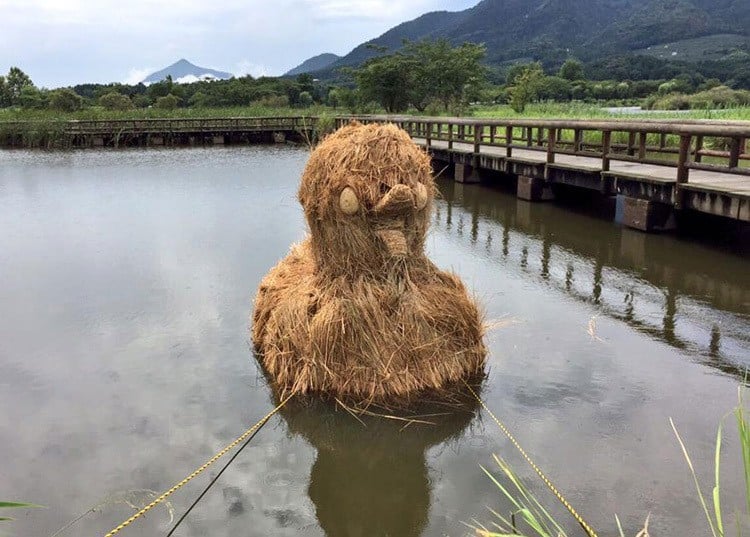 This duck brings whimsy and joy as it floats in the pond at the festival. Source: amymauscd 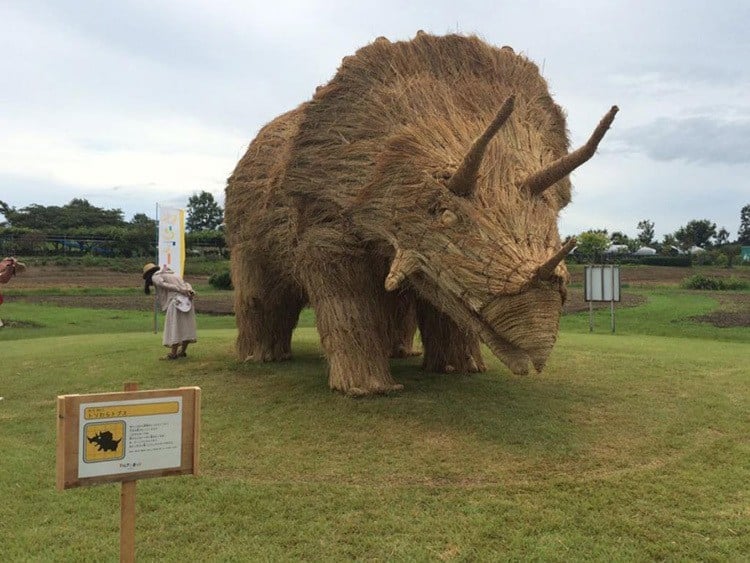 A massive triceratops amazes visitors – as do all of Amy Goda’s dinosaur creations. Source: amymauscd 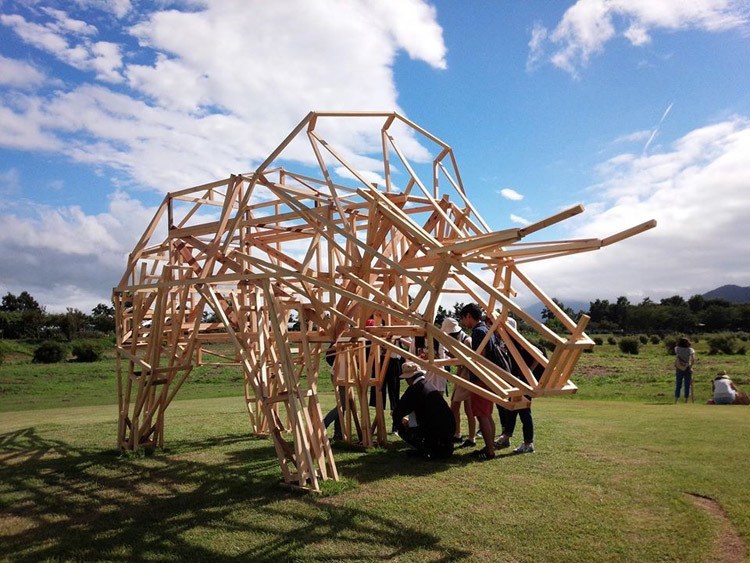 The wooden frame of the triceratops gives a glimpse of what the final sculpture will look like. Source: waraartmatsuri 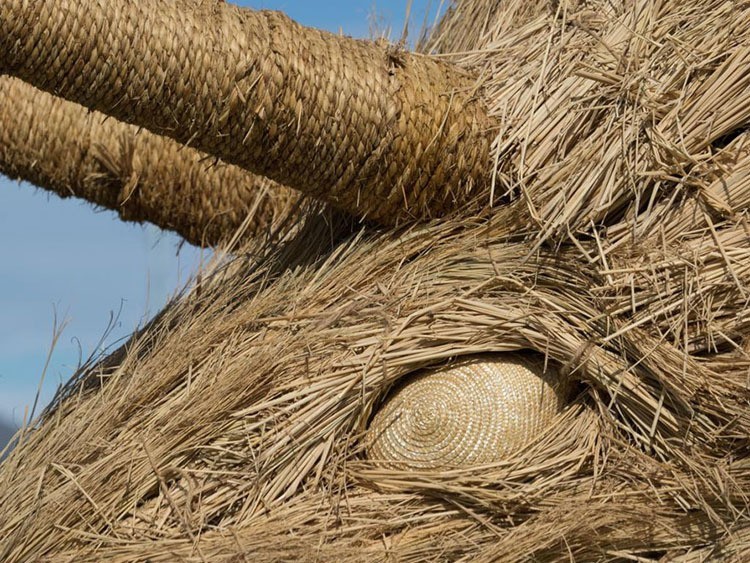 This extreme closeup of the triceratops displays the intricate detail that is present in all of the straw sculptures. Source: waraartmatsuri 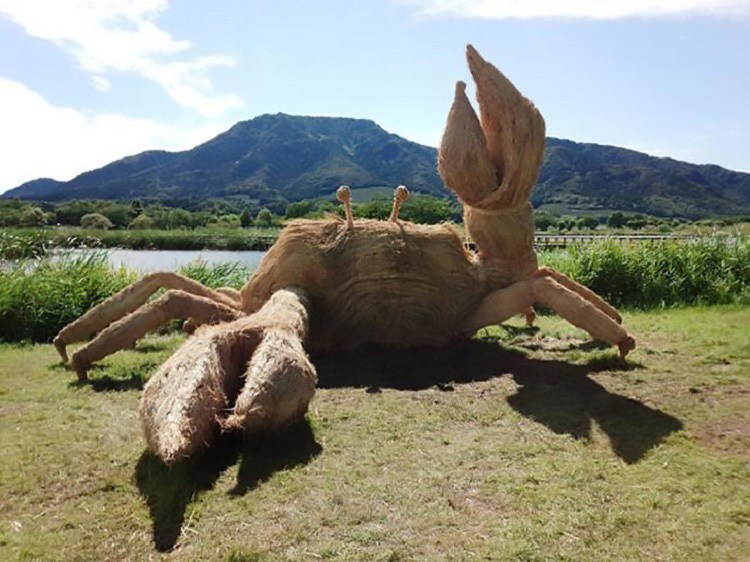 Some of the works are more playful, such as this giant crab. Source: amymauscd 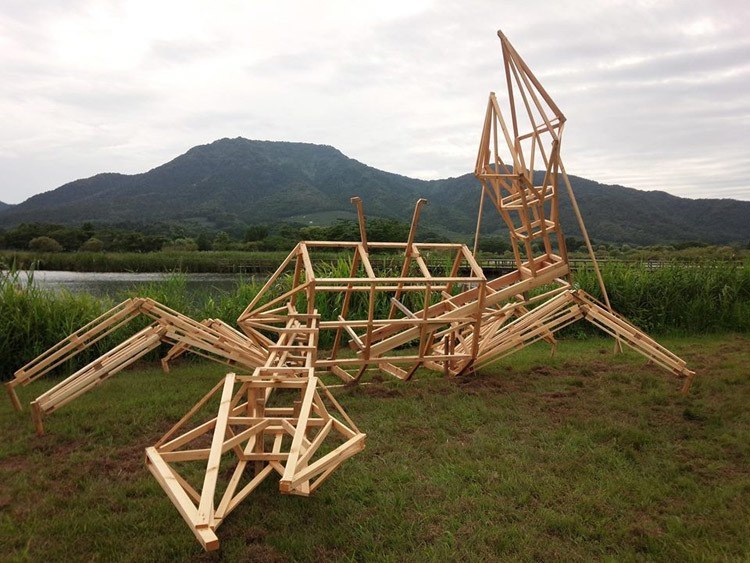 The crab frame actually looks like it could be the frame of a spaceship or futuristic house. Source: waraartmatsuri 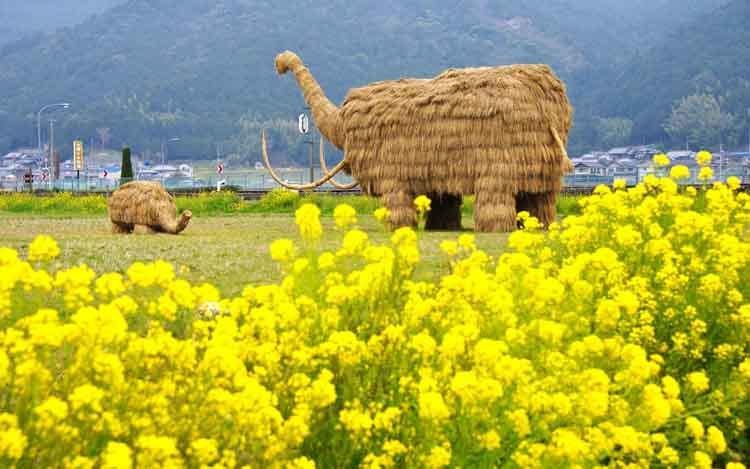 These woolly mammoths show that the dinosaurs are not the only prehistoric beasts ruling the Wara Art Festival. Source: waraartmatsuri 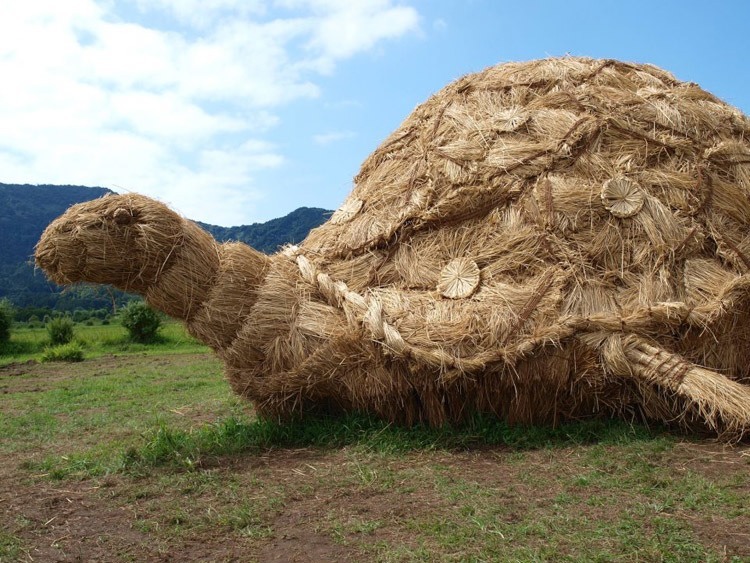 A majestic giant tortoise looks protectively out over the crowd. Source: waraartmatsuri 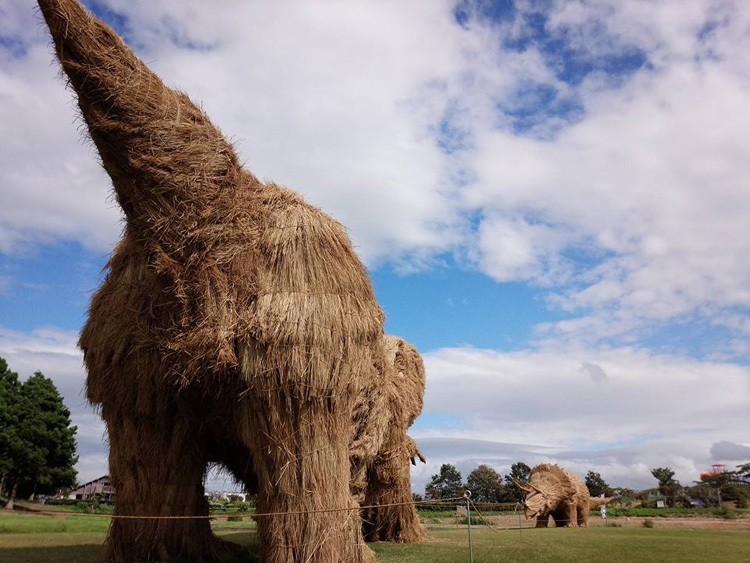 With the large variety of animals and other sculptures at the festival each year, it is the dinosaurs that continue to bring the most interest- and the most press. Source: waraartmatsuri