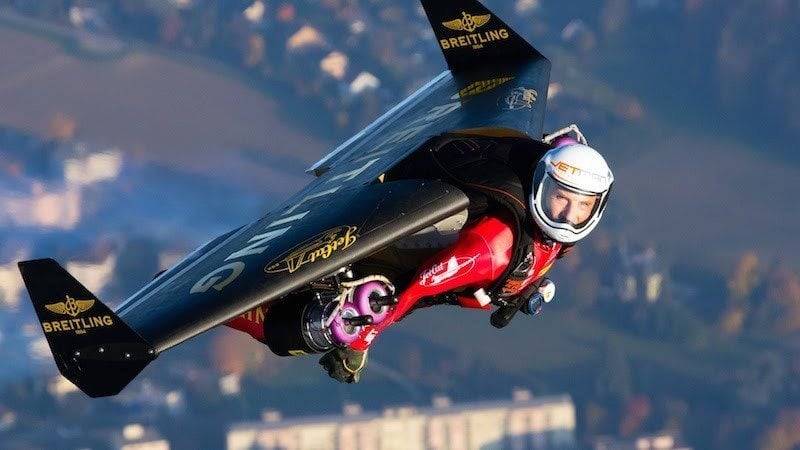 In 2008, ex-fighter pilot Yves Rossy — nicknamed ‘Jetman’ — became the world’s first jet-powered man when he launched his first official flight above the Alps in his native Switzerland. Since then, he’s gone on to fly across the English channel, the straight of Gibraltar, and over the Grand Canyon in Arizona. In the video below, Rossy flies over Dubai with another jet-powered man, Aerobatics Champion Veres Zoltán, for the first time:

It has taken Rossy more than 10 years and 15 prototypes to develop and perfect this wing-suit system which consists of a backpack, 7.9 feet of semi-rigid carbon-fiber wings, and four Jet-Cat P200 jet engines. That’s it. There’s no rudder, nothing to stabilize the jet-powered man besides his own body movements. He can travel at a steady speed of 120mph, and can reach top speeds of 200mph.

Rossy’s corporate sponsor is Swiss watch manufacturer Breitling. His success just goes to show that with enough experience, determination, and, most importantly, money, humans really can do anything–even fly.

Julia Day
Julia Day is a New York based writer and illustrator. She attended Colby College where she studied 17th Century Poetry, Environmental Science, and Philosophy.
You might also like
Remove Ads
×
Follow ati On
Join The All That's Interesting Weekly Dispatch
Like Follow
Posting....