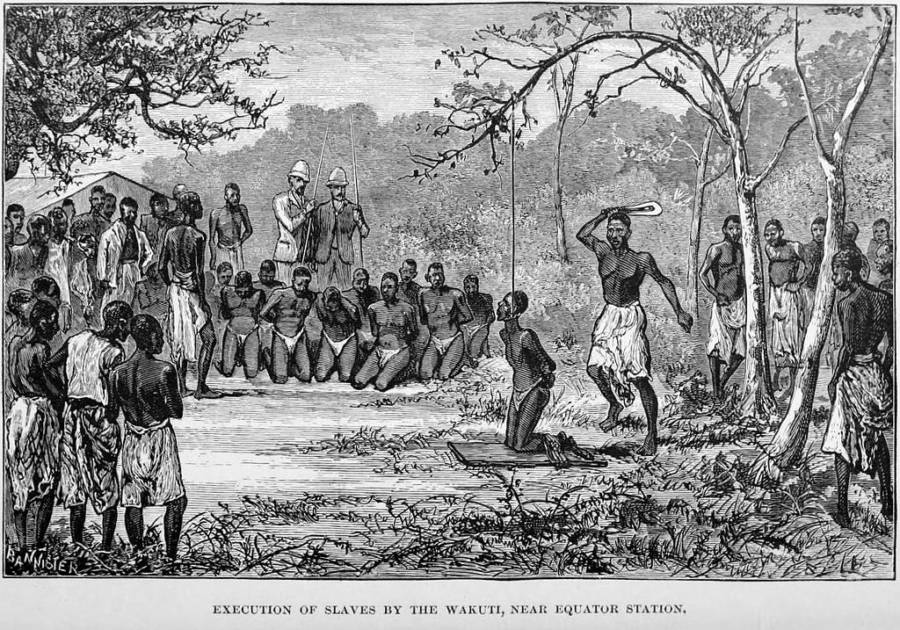 Wikimedia CommonsAn illustration from HM Stanley’s “The Congo and the founding of its free state; a story of work and exploration (1885).”

In 1878, Henry Stanley presumed to meet Dr. Livingstone deep inside the Congo rain forest. The international press made both men out to be heroes – bold explorers in the heart of darkest Africa. What went unsaid in the breathless newspaper accounts of the two men’s famous expeditions is what they were doing in the Congo in the first place.

A few years before the two expeditions met up, Leopold II had formed the International African Society to organize and finance exploration of the continent. Officially, this was a prelude to a kind of international philanthropic enterprise, in which the “benevolent” king would shower natives with the blessings of Christianity, starched shirts, and steam engines.

Stanley and Livingstone’s expeditions composed a major part of opening up the rain forest to the king’s agents. This ruse that King Leopold II was working overtime to get Africans into heaven, worked far longer than it should have and the king’s claim to the ironically named “Congo Free State” was formally recognized at the Congress of Berlin in 1885.

To be fair, it is possible that Leopold II, a fairly observant Belgian Catholic, really did want to introduce his new chattel to Jesus. But he did this in the most literal, and ruthless, way possible: by killing a huge number of them and making life generally unbearable for the rest as they labored to dig up gold, hunted to kill elephants for ivory, and hacked down their native forest to clear land for rubber plantations all over the country.

The Belgian government lent Leopold II the necessary seed capital for this “humanitarian” project – and after he paid that debt off, literally 100 percent of the profits went straight to him. This was not a Belgian colony; it belonged to one man, and he seemed determined to squeeze every drop out of his fiefdom while he still could.