Could the tiny bug spell huge shifts in aerospace engineering? 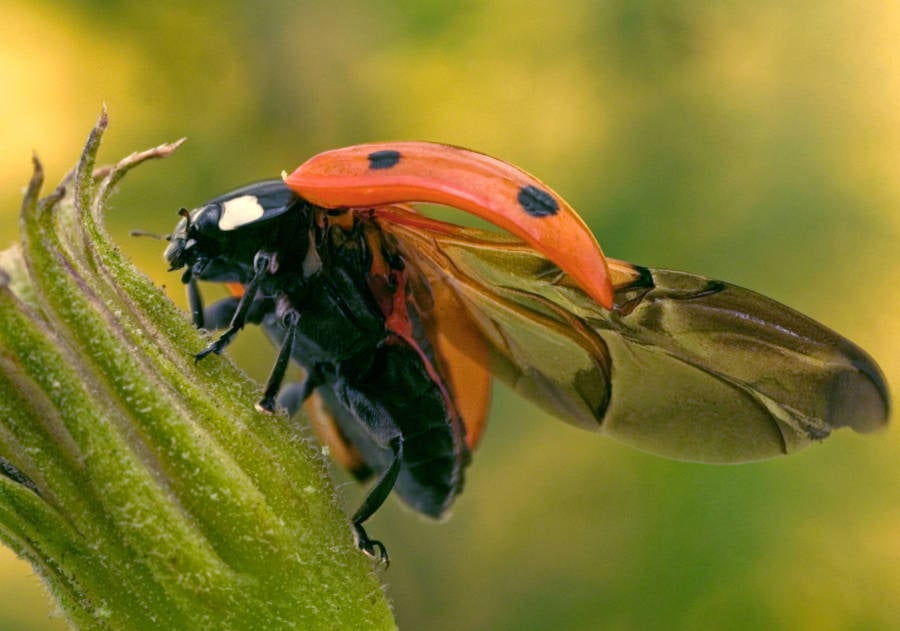 A ladybug’s back wings are four times the size of its body.

To pack them into the tight sliver of space under their polka-dotted outer wings, the bugs use a folding technique that even an origami master would find complicated.

The process, one journalist suggested, is like “trying to fold two 20-foot tents, with poles that do not detach, that are stuck to your back beneath a plastic case and you have no hands to help you.”

And the wings are surprisingly powerful for being so compact: indeed, they allow ladybugs to fly 37 miles per hour, reach altitudes as high as three Empire State Buildings, and stay in the air for up to two hours at a time.

Even more impressive: the entire folding and unfolding process takes less than a tenth of a second.

Seeking to understand this incredible feat of nature, scientists in Japan conducted a new study on the process, gleaning lessons they think will be quite valuable for engineers.

“Ladybugs seem to be better at flying than other beetles because they repeat takeoff and landing many times in a day,” Kazuya Saito, an aerospace engineer at the University of Tokyo and the study’s lead author, told The New York Times. “I thought their wing should have excellent transformation system.”

The reason no researchers have been unable to unpack the wings’ secrets before is that the hard red wings on the outside always hide what’s going on in the folding process.

So, Saito and his team conducted a miniature surgery — swapping the ladybug’s signature look with a transparent fake wing.

They then used high-speed cameras and 3-D X-rays to unpack the mystery.

As the abdomen moves up and down to retract the wings, tiny structures create friction holding them in place. All the while, the wings are folding themselves into a Z-shape that requires their springy veins to twist into circles that easily spring back into lines when it’s time to take flight again.

Though the ramifications of these findings are unknown as of yet, Saito said they could alter how engineers design everything from airplanes to day-to-day appliances.

“Beetle wing folding has the potential to change the umbrella design that has been basically unchanged for more than 1,000 years,” he told the Telegraph</em>.

Next, read about female dragonflies play dead to avoid having sex. Then, learn why scientists brought this giant insect back from the brink of extinction.