The 40-pound-spear missed hitting any of his major organs by a few millimeters. 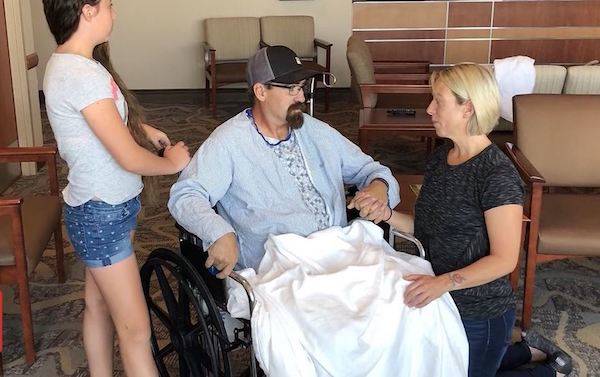 “I never saw any blood come out of the front, and I could feel a little moisture on my back,” said Justin Firth.

The 43-year-old from Jerome, Idaho was recalling a horrific incident that left everyone elated and downright shocked that he was still alive.

On June 27, Firth was working at Southern Idaho Commodities building a fence. The workers were using a loader to push in bale spears (called tines) when it malfunctioned, causing a 40-pound spear attached to the front of the loader to fall.

The spear impaled Firth, piercing him in his back and going straight through his stomach, reported KPVI6.

The rod was still attached to the machine when it went it went through Firth’s body, so his coworkers used a heat torch to cut it from the loader.

Firth couldn’t move, but was alert and said he didn’t feel any pain. “I was pretty scared, I mean it’s pretty mind boggling and pretty scary to know what it is that is sticking through you,” he said. 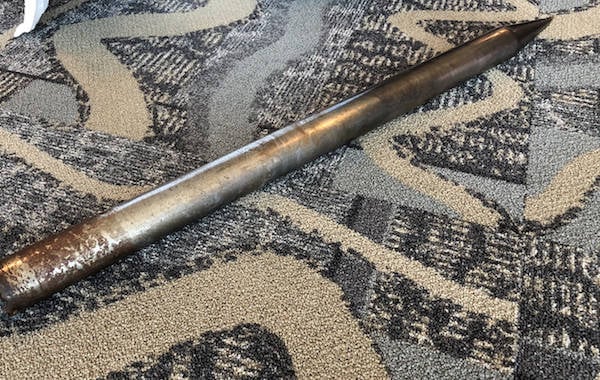 Nate Eaton/East Idaho NewsThe spear that impaled Firth while he was working.

His coworkers called 9-1-1 and his wife, Anny. Firth was then rushed via helicopter to Portneuf Medical Center in Pocatello where a team of trauma surgeons had been notified and were ready for his arrival.

“Hearing the nature of the injury, the thing that kills most people from these impalement injuries is massive uncontrollable bleeding,” said Trauma Surgeon Dr. Terrence Ragerand. “Then as a secondary thing we were worried about is his spinal cord, so with the advanced notice we were able to alert our neurosurgeon.”

Anny showed up but was stopped by an officer. “The officer stopped me at the driveway and said that Justin had requested me not to see him like that,” she said.

“How bad is it? Shoot straight with me,” she told the officer, who happened to be a neighbor. He told her that it was pretty bad, that she should have faith and pray.

“So we prayed. Lots of prayers,” Anny said. 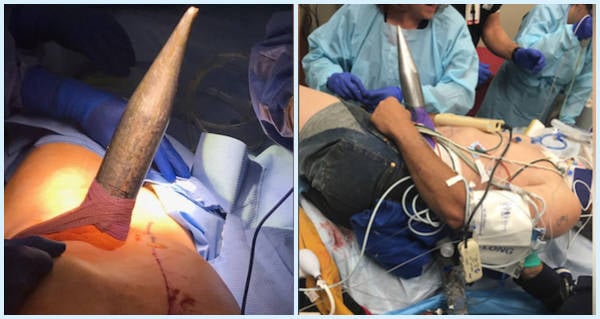 “A lot of the time was spent very, very carefully positioning him in the operating room because the object was still left in place,” Rager said.

The doctors said that Firth was extremely lucky to be alive. The object missed his heart and his spinal cord. “It missed the two connecting his kidney to his bladder by a few centimeters,” said Rager, adding, “Yeah he got very, very lucky.”

According to the surgeons, if the spear had gone in a few millimeters to the left or the right, Firth very well could have died. Part of Firth’s colon was damaged but was fixed during surgery.

With cautious optimism, the doctors said that they expect him to make a nearly full recovery with the help of physical therapy and rehabilitation.

Nobody knows how the attachment fell from the loader. The Occupational Safety and Health Administration is investigating.

“I want to say a big thank you to the doctors and everyone who helped,” Firth said from a wheelchair at the Portneuf Medical Center. This could have killed me instantly.”

Next read about Roy Sullivan who was struck by lightning seven times and survived. Then read about Anatoli Bugorski, the man who was shot through the skull by a high powered laser.