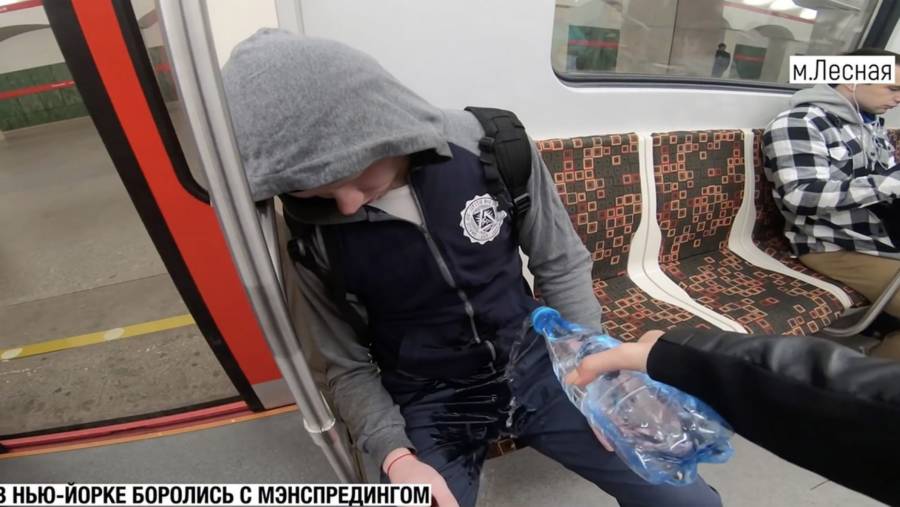 An activist in Russia is combating the public transportation plague known as “manspreading” by pouring a bleach-and-water mixture onto men’s crotches.

“Manspreading” refers to the instance of a man sitting with his legs set widely apart. It is considered problematic when in public as it can not only take up more space than necessary but has also been considered a symbol of masculine aggression.

20-year-old Anna Dovgalyuk, a law student, has balked against this by pouring a beach mixture on men taking St. Petersburg public transit. She claims that her actions are “on behalf of everyone who has to endure the manifestations of [men] declaring [their] macho qualities on public transportation.”

She says that men’s unchecked “gender aggression” is a huge issue and that she’s decided to tackle it herself with this demonstration.

Dovgalyuk posted a video titled “Spread your legs? Here you go” on YouTube, in which she has dedicated “for whom manspreading is the norm.” It has since been removed for “violating YouTube’s Community Guidelines.”

Dovgalyuk justifies her actions this way:

“Men demonstrating their alpha-manhood in the subway with women and children around deserve contempt.”

She claims the mixture is “30 times more concentrated than the mixture used by housewives when doing the laundry” and has since exposed about 70 unsuspecting male passengers to it.

Dovgalyuk says that her bleach “eats colors in the fabric in a matter of minutes, leaving indelible stains.” These stains act as “identification spots. So everyone can immediately understand which body part controls the behavior of these men.”

According to Fox News, the video received 1.3 million views after being posted for only one day. It’s unclear when it was removed from YouTube.

Russian news outlet Rosbalt alleges that Dovgalyuk’s video is fake and that the men she pours the bleach on are paid actors, but she insists that what viewers are seeing in the video is absolutely real.

Dovgalyuk is no stranger to receiving media attention for her activism. In 2017 she posted a video of herself lifting her skirt to reveal her underwear at a St. Petersburg metro station. She did so in protest and in an effort to criminalize upskirting.

‘This video is ‘dedicated’ to all who love to peek under skirts. On the behalf of all women who became your victims – here, look! And stay away from us,’ the caption on the video reads.

Given her history of brazen public activism, it’s not hard to imagine that Dovgalyuk would go so far as to stain unsuspecting men with bleach in order to make a point.

So with Dovgalyuk riding the metro, maybe men in Russia will think twice about how they sit on public transit.

Next, check out these 6 feminist icons that don’t get the credit they deserve. Then, read about Valerie Solanas, the feminist radical who shot Andy Warhol.