Mutant Crayfish In Europe Are Cloning Themselves Like Cray Cray 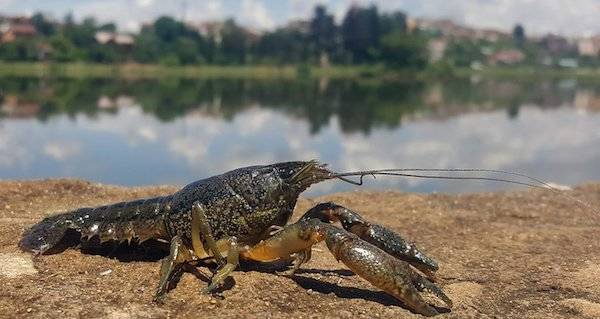 What began as an innocent and new discovery for German hobbyists in the pet trade has (literally) morphed into an entirely new species.

Its scientific name: Procambarus Virginalis. Its cute name: marbled crayfish. Its claim-to-fame: a mutated crustacean with the ability to clone itself by the hundreds.

It started when two slough crayfish mated. One of them had a mutation in its sex cell, which contained two of each chromosome versus the usual single copy of each. What resulted was a female crayfish embryo with three copies of each chromosome and no deformities, even with all the extra DNA.

This was back in the late 1990s, when a German aquarium hobbyist noted the large size of the crayfish as well as its large batch of eggs. He began giving them to friends and soon they were common in pet stores around Germany.

That’s when things took a turn. Pet owners were noticing that their crayfish were laying eggs without reproducing. And because marbled crayfish can produce hundreds of eggs at a time, an owner starting out with a single crayfish might, just one year later, have a couple hundred of them.

In 2003, Frank Lyko, a biologist at the German Cancer Research Center who has been working with his team on researching the marbled crayfish, confirmed that they were indeed cloning themselves.

So people, not wanting to undertake several hundred new pets, began dumping all these crayfish in nearby lakes.

As it turns out: marbled crayfish, don’t really need a whole lot of (or any) pampering to survive. They established populations in the wild, walked to new lakes and streams, and starting showing up in countries across Europe followed by Japan, then Madagascar.

In December 2017, Lyko officially declared marbled crayfish its own species, giving the animal its endearing official name, Procambarus virginalis. Thus, what started as a fun new pet is now causing a stir as a potential invasive species due to its ability to reproduce at such high rates with just a single individual.

It’s unclear how long these species will last, as asexual species can lack some of the benefits of sexually reproducing species like the ability to fight off diseases or develop strong defenses. In the meantime, however, these creatures are reaping the benefits of their abilities, specifically their ability to create exploding populations in at least three continents.

Now check out killer fish and man-eating snakes: nine invasive species that are destroying America , then take a look at the gross new species of frog that looks like a pig