The video shows the dog responding to "grossly offensive" terms, an act which YouTube claimed was "clearly comedic."

A British man has been found guilty of a hate crime after posting a video to YouTube of him teaching his dog to give a Nazi salute.

Mark Meechan, a popular YouTuber who goes by the name Count Dankula, posted the video back in 2016. In the video, he explains that he was annoyed by his girlfriend thinking the dog was cute, and in response decided to turn the dog into “the least cute thing” he could think of — a Nazi.

Meechan taught the dog to lift his paw in response to the command “Sieg Heil” and “gas the Jews.” The resulting video shows several clips of him asking the dog if he wants to “gas the Jews,” to which the dog responds.

After the video went viral, Meechan was arrested for a hate crime. Sheriff Derek O’Carroll called the video “grossly offensive,” and claimed that Meechan knew it would be. Meechan himself said during the trial that he “liked offensive comedy.”

“He said he chose ‘gas the Jews’ as it was the most offensive phrase associated with the Nazis that he could think of,” said O’Carroll. “It was the centerpiece of the joke. He said it was so extreme that it added to the comedy.”

In his defense, Meechan claimed that the video was made as a private joke, and wasn’t intended to be seen by a large group of people. However, before long, the video had over three million views.

O’Carroll claimed that the defense was bogus, as Meechan had “not taken any steps to prevent the video being shared publically.”

On Tuesday, Meechan was found guilty under the Communication Act. Before entering the courtroom to hear his verdict, Meechan posted a short message to his YouTube followers. 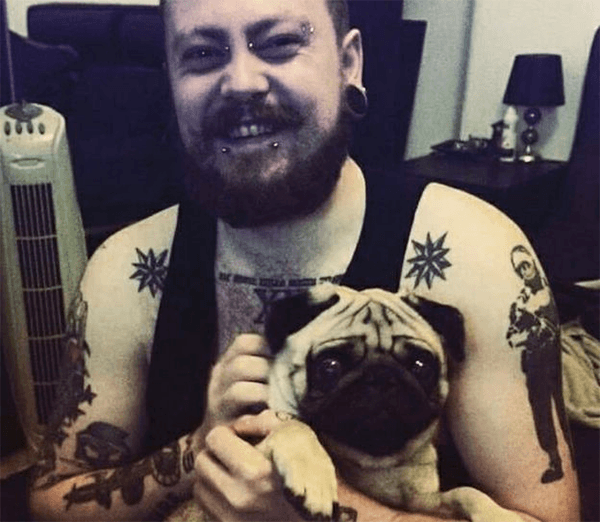 “If the worst comes to the worst, and everything goes terribly, keep fighting for free speech, keep fighting the good fight, the great meme war,” he said. “I am going to leave you with a great Scottish saying, “don’t let the bastards grind you down.”

Though Meechan was found guilty, and awaits his sentencing in April, the case sparked a large public debate about free speech. Despite protests, YouTube initially refused to take down the Nazi dog video, claiming that though it was obviously offensive, the intent was “clearly comedic,” and that they were a site that believed in freedom of expression. Later, however, the video was removed.

Comedian Ricky Gervais even weighed in on the subject, voicing his support for Meechan.

Meechan awaits his sentencing, to be determined on April 23.

Next, check out the craziest Nazi weapons ever invented. Then, check out these twin brothers, one who grew up as a Nazi, the other as a Jew.