In what might be the most expensive joke ever, Kraft-Heinz paid the little town tens of thousands for this unprecedented marketing stunt. 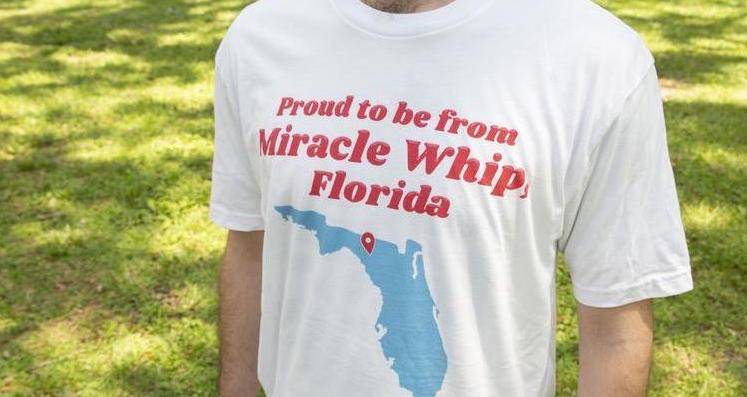 A small town in Florida is making headlines and polarizing sandwich fans everywhere after a controversial name change.

Mayo, Fla., a tiny town located between Gainesville and Tallahassee, has temporarily changed its name to “Miracle Whip.” The tongue-in-cheek change came about when a team from Kraft-Heinz, the Miracle Whip manufacturer, proposed the switch as a marketing tactic and offered the town between $15,000 and $25,000 for their participation.

City council members met with Miracle Whip representatives in secret to discuss the change, trying to keep things under wraps and not have word spread in the tiny town. However, this secret session appears to have violated Florida’s Sunshine Law which requires meetings to be held publicly.

“If this is all supposed to be a big joke perpetuated on residents, I expect they probably violated the law to pull it off,” Barbara Petersen, president of the First Amendment Foundation, told the Associated Press, “I hate to be a Debbie Downer, but seriously, I don’t think they thought this through.”

According to the Associated Press, the town’s officials say that the residents are not aware that this is just a stunt and that they will let the residents in on the joke in a few days. Until then, citizens of Miracle Whip will be asked to get rid of all the mayonnaise in town. A video posted to Miracle Whip’s twitter account showed some of the footage captured during the reveal and presented some of the big changes to the town like their water tower and fire department revamps. Representatives for Miracle Whip were on location in the town on Aug. 25 to capture the townspeople’s reactions to the name change.

One of the smallest towns in Florida, Mayo has just over 1,000 residents. It was named for James Micajah Mayo, a Confederate colonel. But the town’s biggest claim to fame is it’s being the hometown of University of Florida quarterback Kerwin Bell.

According to USA Today, the town is located in Lafayette County, Florida’s second-least populated county. The largest employer in the area is a state prison.

The town’s mayor Ann Murphy was a fervent supporter of the name change, even telling the Associated Press that she wouldn’t mind making the switch permanent.

“We aren’t going to be boring Mayo anymore,” Murphy said. “We are going to be Miracle Whip! I definitely think this will put us on the map.”

This isn’t the first time that a town has changed its name for monetary gain or to achieve an uptick in publicity.

According to Associated Press, in the 1990s Granville, N.D. briefly changed its name to McGillicuddy City after a $100,000 payment from the mint schnapps distributor. More recently, Topeka, Kan. temporarily renamed itself Google, Kan. in an ultimately unsuccessful attempt to get the tech giant to install a high-speed broadband network in the area.

With coverage all over the internet from local news to the New York Times to Google Earth, it looks like Miracle Whip, Fla. is now officially on the map.

Can’t get enough of Florida’s signature oddness? Meet the Skunk Ape, Florida’s own personal Bigfoot. After that check out these unbelievable photos from Florida’s golden age of ostrich racing.