Greenland’s Ice Is Melting So Much, These Sled Dogs Look Like They’re Walking On Water

Astonishing photo of a pack of sled dogs charging through melting ice caps in Greenland was "more symbolic than scientific to many." 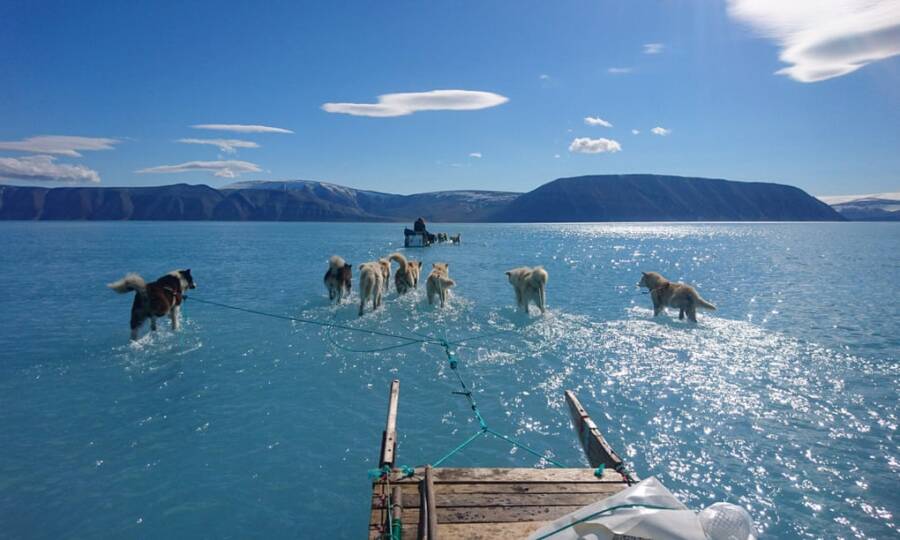 Steffen M Olsen/TwitterEarly thawing of ice and lesser snowfall in the Arctic flooded the Inglefield Bredning fjord in Greenland forcing sled dogs to dash through icy water melted from the ice caps.

On an unusually warm day in Greenland, scientist Steffen Olsen took a group of sled dogs out onto the Inglefield Bredning fjord to perform a routine procedure to retrieve his team’s mooring and weather station equipment.

But on his way, Olsen, who works at the Center for Ocean and Ice at the Danish Meteorological Institute, came across an astonishing sight: the thick Arctic landscape of his route had been drowned by sea water that came from melting ice caps.

Nonetheless, Olsen continued his journey with the pack, treading through an expansive body of water that was ankle-deep and — by all accounts — was not supposed to be there. The ice sheet below is about 4 feet thick.

Olsen’s snapshot of the stunning scene went viral, striking a chord with the public over growing concerns of global warming.

@SteffenMalskaer got the difficult task of retrieving our oceanographic moorings and weather station on sea ice in North West Greenland this year. Rapid melt and sea ice with low permeability and few cracks leaves the melt water on top. pic.twitter.com/ytlBDTrVeD

To make it safely through the flooded surface, Olsen relied heavily on traditional knowledge from local hunters and the instincts of the sled dogs, as well as satellite images that were prepared ahead of the trip.

Climate scientist Ruth Mottram, who also works at the Danish Meteorological Institute, said that the incident was quite unusual as meltwater typically drains through small fractures in the thick Arctic ice.

“The ice here forms pretty reliably every winter and is very thick, which means that there are relatively few fractures for meltwater to drain through,” Mottram told The Guardian. “Last week saw the onset of very warm conditions in Greenland and in fact much of the rest of the Arctic, driven by warmer air moving up from the south.”

Arctic ice thaws every summer, but this year it seems to be thawing weeks ahead of schedule. According to the New York Times, the Arctic region is warming at twice the rate of the the rest of the world.

The U.S. National Snow and Ice Data Center reported that in May the entire Arctic ice territory measured 4.7 million square miles — more than a 700,000 square miles below the average size between 1981 and 2010.

The day before the photo was taken, temperatures over parts of Greenland were 40 degrees Fahrenheit above average.

According to Ted Scambos, a senior researcher at the Earth Science and Observation Center in Colorado, warming temperatures in Siberia could be the reason for the melting Arctic ice. 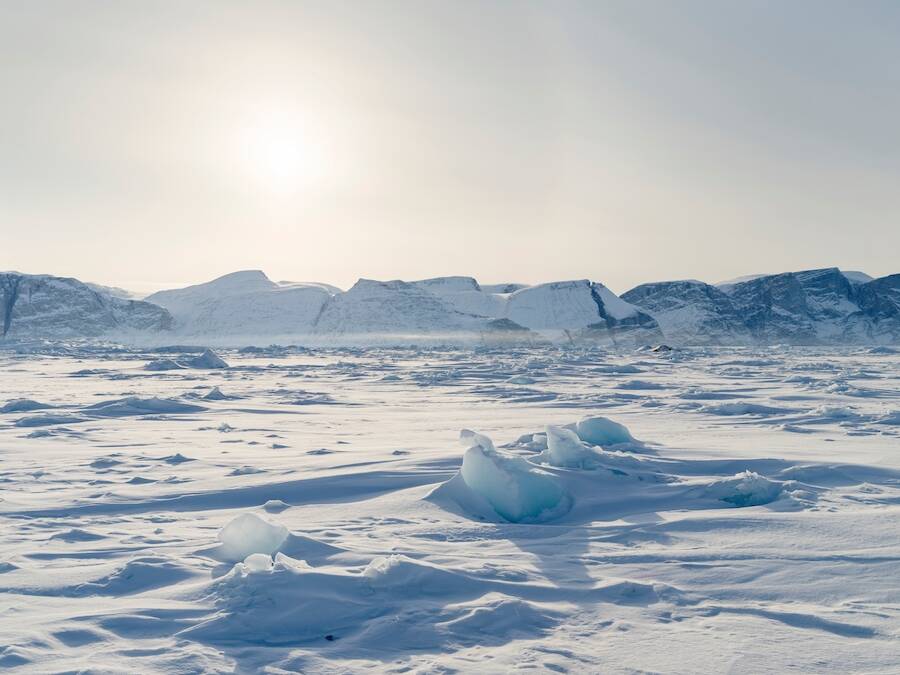 Martin Zwick/REDA&CO/Universal Images Group via Getty ImagesExtreme weather disasters could continue to flood the region and hamper the mobility of local residents who need to travel, fish, and hunt.

A few other factors may have also contributed to the early ice thaw. For starters, the region experienced significantly lighter than average snowfall this past winter, especially in the north of Greenland. The thinner the snow pack, the faster the snow melts, exposing the ice more quickly.

Whatever the case, the sight of dogs walking on water should give one “paws” about the Earth’s climate.

Next, take a look at 25 global warming photos that prove you have no more excuses to not “get” climate change. And then, learn how global warming is exposing more dead bodies on Mount Everest.