Even after notifying their son five times and offering him cash, he still refused to leave – so they took him to court. 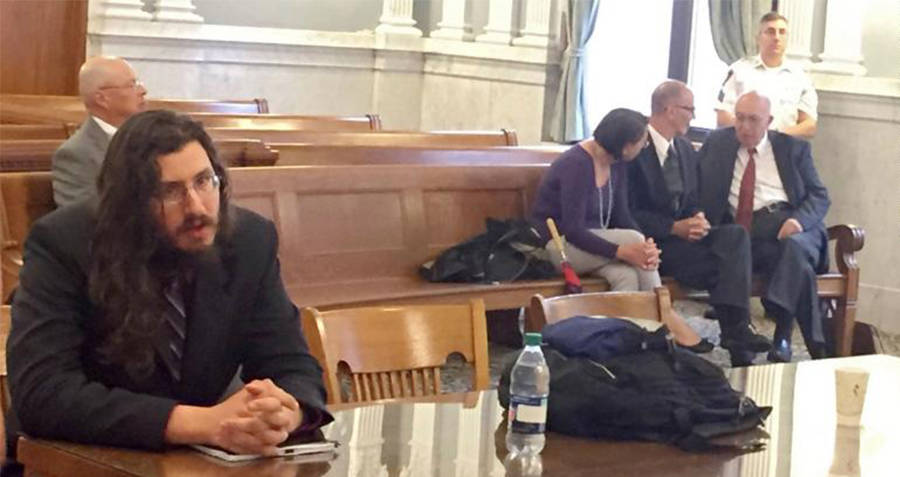 CNNMichael Rotondo, who represented himself, waits for the verdict while his parents confer with their lawyer in the gallery.

Even after five notices and an offer of cash to move out of his parents’ home in Camillus, N.Y., Michael Rotondo pulled a real-life Failure to Launch and refused to leave. So, his parents did what every loving mother and father at the end of their rope would do.

They took him to court.

On Tuesday, a New York judge ruled in favor of the parents, Christina and Mark Rotondo, and ordered the 30-year-old man to leave. However, he isn’t going down without a fight. He claims he’s owed a six-month notice, which would give him ample time to prepare for such a big step.

“I just wanted a reasonable amount of time to vacate, with consideration to the fact that I was not really prepared to support myself at the time of the notices,” Rotondo told WSTM News.

The notices Rotondo is referring to are the five separate notices he’s received over the last several months, informing him that his parents want him out. The first notice arrived on Feb. 2.

“After a discussion with your Mother, we have decided you must leave this house immediately,” the notice reads. “You have 14 days to vacate. You will not be allowed to return. We will take whatever actions are necessary to enforce this decision.”

But when Rotondo didn’t leave, Christina and Mark sought legal counsel who advised them to serve yet another notice. The second notice arrived 11 days after the first, on Feb. 13, and extended the timeframe. Rotondo now had 30 days to vacate the room he’d occupied for eight years before further action was taken.

Five days later they even offered him a cash incentive, gifting him $1,100 to help him find a place to live. In an accompanying note, they provided some tips on how to go about moving out.

1) Organize the things you need for work and to manage an apartment. Note: You will need stuff at (redacted). You must arrange the date and time through your Father so he can set it up with the tenant.

2) Sell the other things you have that have any significant value, (e.g. stereo, some tools etc.). This is especially true for any weapons you may have. You need the money and will have no place for the stuff.

3) There are jobs available even for those with a poor work history like you. Get one – you have to work!

4) If you want help finding a place your Mother has offered to help you.

Despite all of this, by March 5 (10 days before the deadline) Rotondo had shown no signs of moving out. His parents left two more notes – one detailing their intention to pursue legal action against him, and the other offering even more financial assistance. Again, the notes fell on deaf ears.

With no other options, the Christina and Mark filed for an ejectment, and on Tuesday the judge approved an eviction.

Michael Rotondo disagreed, and claimed he needs at least 30 days but ideally six months. As a family member, he said he’s entitled to it. Following the ruling, he told reporters he intends to file for an appeal.

“It seems to me like I should be provided with, you know, 30 days or so, because generally, you get 30 days after you’re found, you know, to have to vacate the premises,” Rotondo said. “So I’m expecting something like that. But realistically, if that’s not the case, I don’t know.”

He added that he finds the ruling “ridiculous.”

Next, read about the judge who locked up a drunk driver’s mother for laughing at the victim’s family. Then, learn about the most eccentric judge in history.