The mother read about the cure in a Facebook group, and decided to try it on her child herself.

An Indianapolis man has accused his wife of feeding their daughter hydrochloric acid, in an effort to cure her autism, police say.

After reading about a “miracle mineral solution” in a Facebook group, the mother decided to try it on her own autistic daughter. In accordance with the recipe, she added several drops of hydrochloric acid and a water purifying solution containing chlorine into a drink meant for her child.

The father claims that his wife told him about the mixture several weeks after feeding it to their child. The father then alerted police, and the Department of Child Services removed the child from the home.

The “Miracle Mineral Solution” has been advertised as a cure-all since 2006 when it was first coined by former Scientologist Jim Humble in his self-published book. The MMS claims to cure almost anything, including HIV, cancer, hepatitis, autism, aids, the common cold, acne, and H1N1, just to name a few. 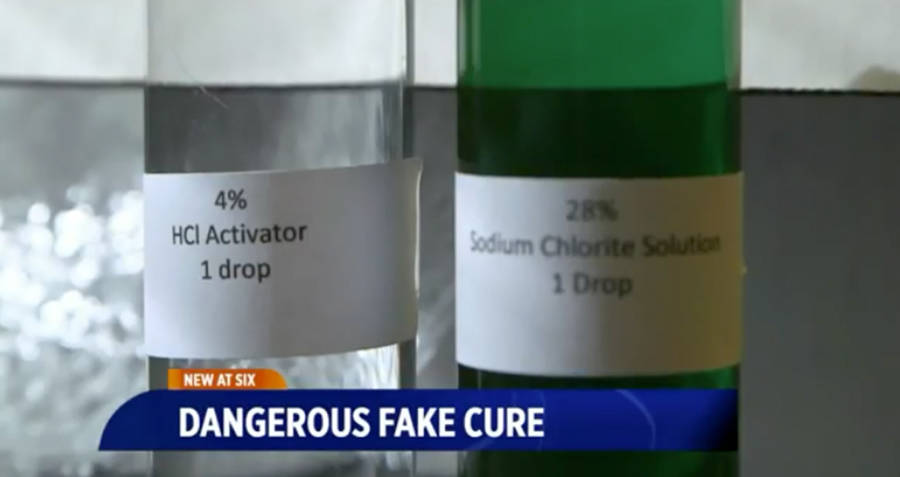 Officials at the Applied Behavioral Center for Autism say that this isn’t the first time a parent has taken their child’s illness into their own hands, and it likely won’t be the last. Parents of ill children often try everything they can to make their child better.

“Taking things into their own hands is something that many parents have done out of desperation, out of hope,” president and founder Sherry Quinn said. Though she makes it clear that the efforts, as well-intentioned as they are, will do more harm than good. After all, there is no “cure” for autism.

MMS is sold in a variety of places online, though recipes for homemade versions, like the one used by the Indianapolis mother, also exist. The most common ingredient in homemade MMS solution is bleach or industrial water cleaner.

Though the MMS claims to cure everything, the solution creates far more problems than it solves. Side effects of bleach and hydrochloric acid on the body include nausea, vomiting, dehydration, and corrosion of the stomach lining.